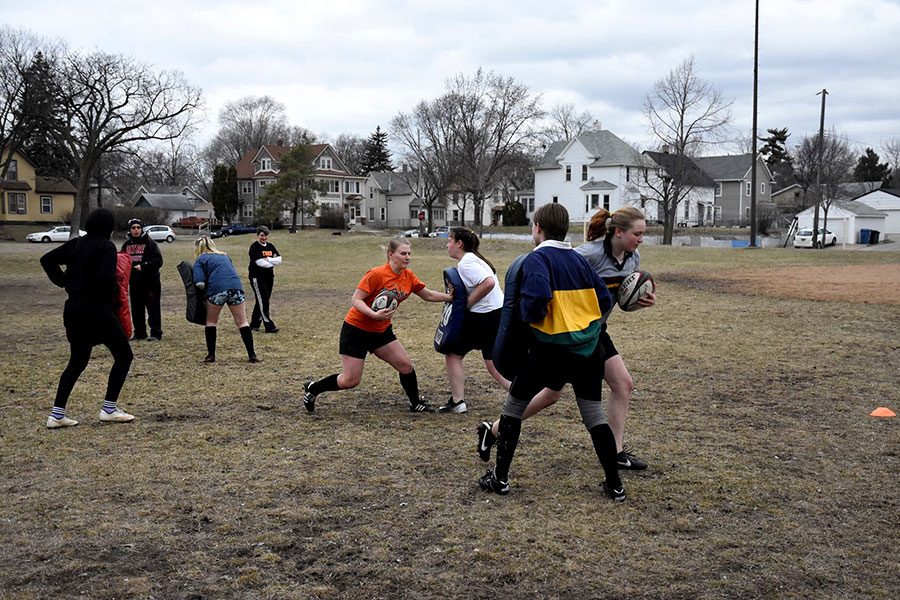 As pictured above, rugby players participate in an activity where they run with the ball, hitting blockers (similar to those used in football) as they go. Players also practice strategies that they can implement during games, such as rucking. This is when players push against each other to get the ball out of a pack, so someone else can grab it. Photo: Sophia Manolis

In terms of popularity, the sport of rugby isn’t really at the same level as sports like football or soccer. Oftentimes it’s mainly just thought of as “dangerous,” and because of this many people are too scared to play it. However, the girls on South’s rugby team have discovered that rugby is a truly enjoyable and unique sport that’s accessible to everyone.

Because rugby is not a sport recognized by the Minnesota State High School League, both boys’ and girls’ South rugby teams are clubs that are part of a wider organization called Minnesota Youth Rugby. Most of the players come from various schools including Washburn, Roosevelt, Edina, and De La Salle. Only three players on the girl’s team are actually from South: Leah Vanek, Ingrid Heard, and Menna’t Bassiony.

According to most players rugby is an enjoyable sport for many reasons. Some emphasized the thrill of the sport’s all-out physicality. “I went to my first practice and I was hooked. I’ve never played a contact sport before and I love it, it’s just great,” said sophomore Leah Vanek. Coach Nadine Nader emphasized the importance and satisfaction of the game’s strategy. “Everyone can score. It just depends on how clever you are, and if you understand the game,” Nader said.

The fundamental goal of rugby is to move a ball across a field to touch it onto a line (which is like getting a goal or touchdown). Using strategy is necessary for the players to work together. “It’s like a v of geese running forward… whoever has the ball is in front,” said Vanek. Most of the time it involves tackling and other forms of physical contact. “There’s a lot of rucking,” described Roosevelt student Tarra McCabe, “which is where you push against another person in a pack until the ball moves with the group of people, until the ball gets out and then it’s just running with the ball again.”

The game is most often compared to football, but according to the players it’s actually quite different. “You could compare it to football, but I think there’s a lot more strategy and it’s [more] fast-paced…you never really have the ball for more than a few seconds,” said junior Ingrid Heard. Nader believes rugby is different because “it’s not a set position that scores all the time. If you have the ball, you can score, [and] everyone touches the ball at one point or another in the game.”

A big part of learning rugby is knowing how to be safe, and because of this the game is not actually as dangerous as it might seem. “We’re taught well here. We know all the basics and we know how to be safe,” Vanek said. Most players, like Heard, don’t even worry about possible injuries. “I feel like if [I] play it right, [and] stay low I don’t really worry about [getting hurt],” she said.

There are still many challenges to rugby. Most people start playing rugby without understanding it, and are faced with learning it quickly. “I had no idea how the actual game worked until I had to sit down and watch a bunch of matches,” said Vanek. “Just understanding it… [is hard] especially in society where we don’t play rugby a lot.”

According to McCabe, another challenge is “[the] determination and motivation to keep going… it’s exhausting.” However, she believes exhaustion is worth it. “It’s exhilarating and there’s a lot of adrenaline. Once you get going it’s like you can’t stop.”

One of the reasons why rugby stands out among other sports is because of the camaraderie between different teams. “We’ll be throwing each other to the ground on the field, but [after a game] we all sit down and we actually all have dinner together, and we learn each other’s names,” said Vanek. “I’ve never become part of a sports culture that encourages you to be friends with the other team.”

Even more, rugby is a sport where you can find a ton of support and friendships within your own team. Heard described the girl’s team as, “a big family… it’s pretty supportive.” And as said by McCabe, “there’s definitely a lot of dependency on your teammates and you gain a lot of really close relationships really quick…. It’s pretty invaluable to me.”

Above all, one of the most unique things about rugby is how accessible it is to whoever wants to play. “We have a real beautiful gift of athletes here,” Nader said, “And the game is so open to all kinds of athletes, whether they have some background, or just have it in them to play hard.” As Vanek believes, “It’s a great way to make friends… [and] it’s accessible to people of all shapes, sizes, and athletic abilities.” Though it’s often thought of as too dangerous of a sport, in rugby there really is a place for everyone.