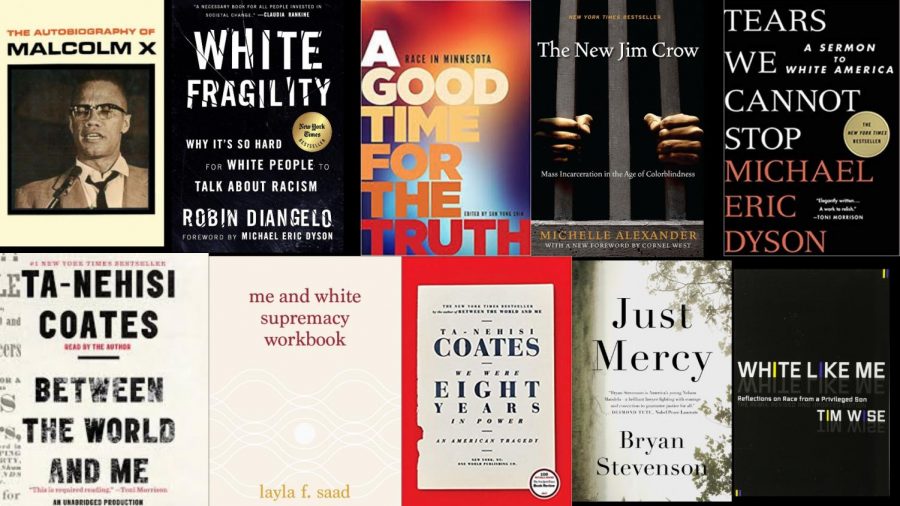 Every white person has white privilege and therefore contributes to the system of white supremacy. In order to actively work against racism, we must educate ourselves about how to combat our privilege. Pictured above are a selection of books that should be read in order to combat white supremacy in our society.

To the white people at South: we need to work against our white privilege

White privilege exists within a broader system of white supremacy. The Oxford dictionary defines white supremacy as, “the belief that white people are superior to those of all other races, especially the black race, and should therefore dominate society.” However, white supremacy is not an overt system, it is insidiously spread throughout society as whiteness is constantly centered and people of color continue to be marginalized.

“No matter where you are in life you -because you’re white-  are elevated to a certain level all the time,” said senior Elise Cuff when asked to describe what white privilege is. White privilege means that no matter what I am trying to do, I will not be held back by my race. For example when I apply for jobs I can trust that my race won’t be a factor in the decision process. I will never be pulled over because of my race, I will never be asked to speak for my entire race, I will never have to worry that my race hinders me in my path to success. White privilege does not mean that I am not underprivileged in other ways, or that I will not experience life struggles, but it is one form of privilege that I will always have.

When I first learned about what white privilege was, I didn’t feel the need to work to dismantle my complacency with white supremacy. I thought that by identifying as not racist and supporting people of color I was not a part of the problem. That belief is false.

Since white supremacy is the status quo in our society, every white person is helping uphold this system unless they are working to dismantle it. This is not something for white people to feel guilty about, as the system of white supremacy was not created by any individual today, but it is up to all white people to take responsibility for dismantling it.

There are a wide variety of books, articles, social media accounts and more that have been created for the purpose of helping educate people holding white privilege. In addition to using resources that are meant to directly question the role of white privilege in our society, consuming content created by people of color is also important.

Often the majority of the content we take in is created primarily by white people. When I look at most magazines or browse shows and movies on Netflix I often see people and stories that represent me and my whiteness. By taking in content created by people of color I can support the creators as well as learn about a perspective that lacks representation.

One resource that has been extremely helpful in examining my own privilege and complicity in the system of white supremacy is the Me and White Supremacy Workbook created by Layla F. Saad. It is a free 28 day journaling workbook that had me explore how I uphold white supremacy through exploring concepts such as white fragility, white silence, and white exceptionalism. It is a one of a kind resource that is intended to be used again and again.

The workbook is made up of a series of daily journaling prompts. I don’t always get to the writing everyday but I do prioritize it when I have time and push myself to do it daily. I’m only a couple weeks into the book but I have already found that by writing down my thoughts I am able to hold myself accountable to the changes I need to make.

When I complete the workbook I plan to revisit and go through it again. This aspect of the workbook makes it a truly valuable tool in my ongoing process of fighting the system of white supremacy. I push anyone who holds white privilege to fight the urge to ignore your complicity and at least start recognizing your privilege by getting through the first week of journaling.

For other white people to educate themselves further, there are other books such as Between the World and Me by Ta-Nehisi Coates, a Good Time For the Truth (a compilation of short written pieces edited by Sun Yung Shin) the Autobiography of Malcolm X as told to Alex Hale, and White Fragility by Robin Diangelo.

There is no end to fighting against racism and my own complicity. It is something I will have to continue to do for the rest of my life. As a white person, I can’t read one book or take one class and think I have separated myself from the system of institutionalized racism. I need to figure out how to use my privilege to lift others and check my thoughts and actions for the habits that have been passed down as societal norms.