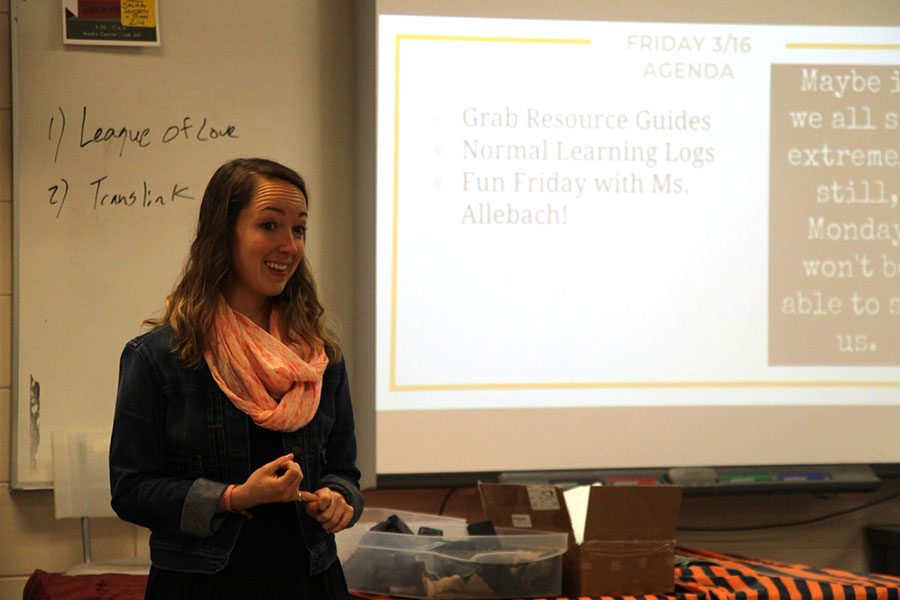 Above Abby Gaul teaches a 9th grade AVID class. “Teachers are already asked to carry the weight of every social problem, and now we’re supposed to be fighting violently against gun violence?” said Gaul on the new bill proposed in Minnesota. This bill would set aside money for training and arming staff members within Minnesota schools as well as strengthening the school’s defenses.

There have been at least 17 school shootings already in 2018, and at least 34 mass shootings in total. As a result, the fight for gun control is gaining momentum and protests have been ramping up. One particular protest declares that students will walk out on April 20th (the 20th anniversary of the Columbine shooting) – and some even said they won’t come back to school until gun laws are tightened.

On the other side of things, some believe that more guns in schools would stop school shootings, because “a good guy with a gun stops a bad guy with a gun.” But at what point does it become too many guns?

While arming teachers in schools should be a far-fetched and implausible idea, it happens to be a reality in the U.S. and even in Minnesota. America’s gun-loving culture, which stems from an unconditional love for the second amendment and devotion to the original Constitution, is a very scary influence on modern-day politics.

In Minnesota, personnel are already allowed to carry weapons in school. Minnesota Statute 609.66 states dangerous weapons are illegal on school grounds, with a few exceptions. All a school staff member needs is written permission from the Principal or Superintendent, no training needed.

However, there is a new bill being introduced in Minnesota that would give schools the option to mass train school staff in active shooter training at no cost to the school. This bill, introduced on March 1st, 2018, would set aside large chunks of money for school use in strengthening their defenses as well as training and arming staff members.

Other actions suggested by Representatives range from installing bullet proof glass to hiring armed guards for the schools.  It sounds like we are creating a militarized police state of a school instead of actually making schools safer.

In reality, arming teachers would not address the full scope of the gun violence problem. As English and Social Studies teacher Delainia Haug said, “to me it feels a little bit like this whole focus on arming teachers is detracting from the bigger more important topic.” Haug believes that the idea of arming teachers is ridiculous. “[Guns in schools] will never happen, we won’t do it. It’s not going to happen…even if it does pass I just don’t think any of us are going to do it. There won’t be teachers at South with guns… I would say the bigger issue to focus on in the gun conversation would be why Americans need so many guns.”

Haug continued to say that while watching the Michael Moore documentary “Bowling for Columbine” she picked up an interesting idea: that our fear-ridden society makes violence seem more necessary. “The argument [Moore] makes is really interesting and a lot of it is about fear mongering in the media, that you watch the nightly news and all it talks about is how dangerous the world is and how dangerous your neighbors are…all this panic and fear and so if you live your life coming from that place you think you need to protect yourself.”

“It’s almost like it’s marketed to us to believe that the world we live in is scary and dangerous. That’s that same argument [used to try] to get teachers to think that they need to be armed,” said Haug

Training teachers on how to shoot people seems like a less solid plan when we realize we do not train police enough to begin with. American police have an extremely high kill rate. In a report conducted by the Washington Post, police officers killed 987 people in 2017 alone. Shockingly enough, police are trained in de-escalation, but in the heat of the moment officers often forget or disregard their training which leads to fatal shootings.

Even more problematic, these shootings are often racialized. “We already have a major problem in our school system and country where we have African American boys being targeted for harsher punishments…[teachers] spend a lot of times breaking down those barriers already and to try to create a barrier with a weapon is just backwards,” said Haug.

Like police, school staff members are not exempt from having prejudices or even acting on them. The whole concept creates an unnecessary problem. With less training and experience, how can we expect teachers with guns, to de-escalate a violent situation when the police cannot? And why should teachers have that responsibility laid on them? Instead of solving anything, this bill creates more complex problems, and more loopholes for people to jump through.

Abby Gaul, a history and 9th grade AVID teacher is well aware of the ridiculousness of arming personnel: “Teachers are already asked to carry the weight of every social problem, and now we’re supposed to be fighting violently against gun violence?” Realistically, weapons in schools would just increase fatality rates more than anything. “Schools are supposed to be places where mistakes can happen and it’s safe, [but if] that mistake came from a teacher or a student that somehow [got] a hold of that gun, it’s horrible to imagine,” Gaul continued.

With the power teachers hold over students already, adding a gun to the situation would only worsen the disconnect between students and teachers in school. “[Teachers] would not want our students to feel more oppressed by school..especially students of color… if you think about that group of people already being targeted as problems, now you give a person of authority that’s in their life everyday a gun… that relationship becomes a dangerous relationship, a relationship where you sense danger instead of trust,” said Haug.

Having teachers and staff not only allowed but encouraged to have weapons in schools is straight up threatening. Whether or not a weapon is actually ever discharged in the classroom, there are extreme implications that even a holstered gun can convey. “I don’t think anyone would feel safer knowing that their teachers have guns. I think it would feel threatening just in the same way when you see a police officer with a gun… especially for students of color that’s a triggering item for very good reasons,” said Gaul. No doubt some teachers out there would abuse the situation. Some may threaten students, some may even harm them.

Instead of focusing on being a reactive force to violence in schools, teachers and school personnel should be focusing on actively preventing mass violent situations. Although staff members are already doing this in schools throughout the country through mental health services and counseling,, they often do not get the support they need.

Allotting more money for weapons would make this lack of support worse because it would take away money from support staff and mental health services. This creates a situation where we only respond to problems instead of preventing them and as a country we cannot continue this way.

The end to all of this seems far away, but there’s hope that we can make a step in the right direction. “I honestly feel like the [solution is the] exact opposite of arming schools: making schools a place that embrace students of all kinds, that have more comprehensive support for students, more love in the classroom, more mental health [resources], more social workers, more spaces where students can be themselves,” said Gaul.