Learning (and unlearning) to be a man 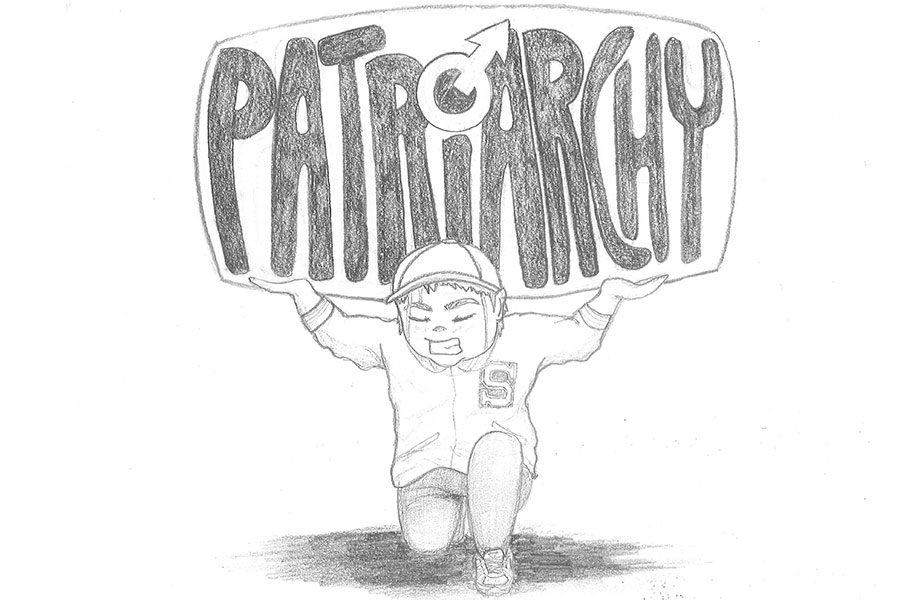 This drawing shows me as a child holding up the weight of patriarchy. As I’ve grown up, the limitations I faced as my grandfather taught me to be a “man” made me feel weighed me down all the time. The pressures of patriarchy are harmful to both men and women in many ways.

I was the son my grandfather always wanted. As I was growing up, he groomed me to become just like him. I was told by him how I should basically walk and talk, so I could become a stereotypical male. I was told what sports I should play and what I should watch. Worst of all, he taught me how to degrade and sexualize women.

From the beginning of my life, I wanted to be close to my grandfather. He would constantly tell me that when he found out my mother was having a boy, he felt so overjoyed. Because he only had daughters, I was truly the son he always wanted: someone he could show pride in and teach how to act like a “man.”

He pushed his beliefs on me, not allowing me to think for myself. As a four-year-old if you asked me about politics I would tell you that the greatest president was Ronald Reagan, and I believed that being liberal represented everything wrong in America.

I remember that at a young age my grandfather would have me and my brother play an absolutely terrible game. The game was played sitting at the downtown Target food court, looking out into the street. As people walked by we would say ‘the third girl you see is who you f**k.’ When I look back at it, I can’t believe that at such a young age I thought this was acceptable. No one, let alone a kid that young, should talk about women or sex in that way.

He taught me how to treat women as objects. He made jokes that stereotype women and would occasionally joke about raping women. He always talked about leaving my grandma and getting with a younger woman. He also sometimes made references about hitting a girl with a shovel or physically abusing her.

Most boys don’t experience exactly what I went through, but they are usually encouraged to act in ways that perpetuate a patriarchal society in which men are more powerful than women and can’t show any weakness.

Senior Jacob Thibault’s father did not necessarily tell him how to act, but instead role modeled supposedly acceptable male behavior. “He would get very drunk… and [then] he’d get very mad, and he’d always lash out against my mother. So then I realized… that it was okay to blame my problems on her.”

Besides being taught to degrade women, I was encouraged to act like a stereotypical male in other ways. I played with cars and Monster trucks, watched the news, played sports, and read the newspaper.

My grandfather also brought me onto baseball, because to him baseball was a true “man’s sport.” We would watch the Twins all the time together, and go sit in the suites at the Metrodome. I gravitated towards the catcher position, which made him even more proud because it made me one of the leaders on the team.

I was also taught that as a male I shouldn’t cry. To cry would mean I wasn’t strong enough or tough enough. Senior Calvin Wilson shared the same sentiment: “I was taught that it’s bad to cry, you’re not supposed to show emotion, you’re supposed to be strong, [and that means] emotion is bad.”

According to bell hooks, patriarchy is “a political-social system that insists that males are inherently dominating, superior to everything and everyone deemed weak, especially females, and endowed with the right to dominate and rule over the weak and to maintain that dominance through various forms of psychological terrorism and violence.” Throughout my childhood this system weighed me down constantly, not allowing me to be myself.

But I was a growing and changing person, and I saw a strong independent women in my mother who raised my brother and I while running her own business. This challenged my belief, and made me question everything my grandfather was telling me.

I began to rethink the messed up jokes and womanizing ideas, and started trying to find information myself. As I began to learn and love new things, I was becoming less like him. I soon realized that things he told me about women and society was messed up.

As I started challenging my grandfather’s beliefs, he became angry that I was becoming my own person and eventually we had a falling out. I now have not had contacted or seen my grandfather in 3 years.

Patriarchy is an issue that not only affects me but affects other boys. It determines how boys are supposed to act and makes it socially acceptable for us to physically harm girls and women. It is something that needs to be talked about in society, even though most males don’t acknowledge it. Boys can’t grow up being told it’s not okay to cry or that as a boy you have to act a certain way. Most of all, boys can’t be brought up to degrade women.