Being an immigrant means being human 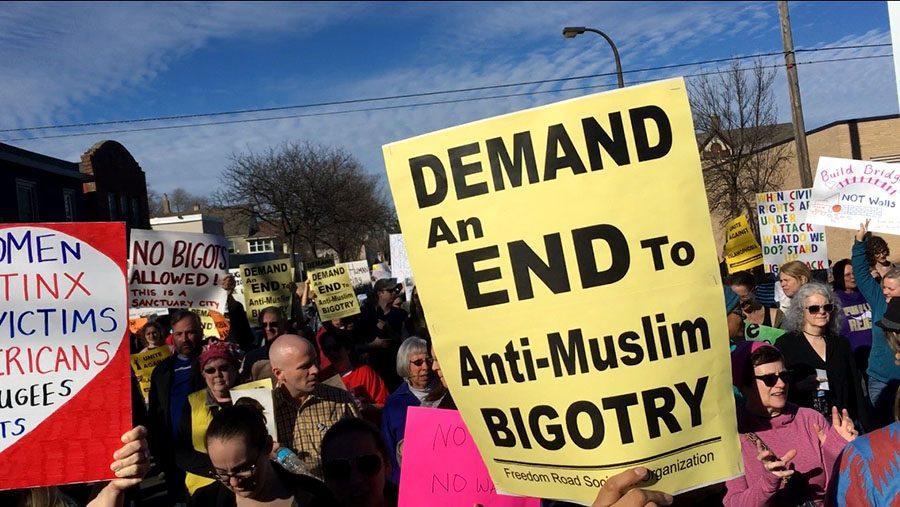 As of late the media seems to be immigrants this and immigrants that. Although immigration has always been a popular topic in the United States, there appears to be yet another uproar due to recent controversial events.

United States president, Donald Trump has been promising Americans “secure borders” since the beginning of his campaign. President Trump even placed a temporary ban on seven muslim majority countries which caused quite the stir not only throughout the United States, but the world. Since the ban seemed to be targeting Muslims as a threat to the United States a federal court put the ban on hold. Even though the Trump administration densities targeting muslim refugees many citizens find the ban to be discriminatory.

Trump has not only targeted the Muslim community but the Mexican community as well. He wants to have Mexico build a wall along the border of Mexico and the United States. At the beginning of his campaign he told his supporters “When Mexico sends its people, they’re not sending their best. They’re not sending you. They’re sending people that have lots of problems, and they’re bringing those problems to us. They’re bringing drugs. They’re bringing crime, They’re rapists. And some, I assume, are good people.”  Once Trump made his stance on immigration clear numerous protests broke out across the nation.

South freshman Divya Homagai participated in a school walkout in Minneapolis. Homagai is an immigrant from Jhapa, Nepal and came to the United States when she was eight years old. Her family didn’t want her to go to the walk out, but despite what her family told her she went anyways.

“I still wanted to stand up for those people…I know how it feels to be in that place. Cause I can imagine me going through that.“ Homagai said. The only person that knew she was going was her mother. Who Homagai persuaded by telling her mother “You should understand their point of views. You need to imagine you going through that situation. Just because we came to America and we know everything doesn’t mean that we have to forget about where we were before. We were immigrants too,” Homogai said.

The fear Homagai’s mother felt wasn’t irrational at all. Many immigrants stay out of protests due to the fear of being deported. Those families are seen inside their homes waving to the protesters to show their support.

United States Secretary of Homeland Security, John Kelly released the Criminal Alien Program that is being carried out by U.S. Immigration and Customs Enforcement (ICE), to target and deport illegal immigrants with criminal records. Trump’s response to this program was,  “You’ve seen it on television. General Kelly, now Secretary Kelly, he’s really doing the job. You’re seeing it. The gang members — bad, bad people. I said it day one. And they’re going out, or they’re being put in prison. But for the most part, get them the hell out of here. Bring them back to where they came from.” Programs like these make immigrants, legal or not, more cautious to the changes that the government has placed, with the increased deportations and profiling enforcement placed by President Trump.

Kimberly Kolstad is a French teacher at South high school and is a Canadian immigrant. She explained that as a green card holder she has decided not to attend any protests. “This has been the hardest political climate I’ve ever had to face. Ever. I feel ready to fight for it, but at the same time it’s scary.” Kolstad has family and a job here and has been in the United States since she was a teenager. Her life is here. She describes the government’s current viewpoint on immigration as “terrifying” and even “horrifying” Even though she is here legally she still gets anxiety.

Both Homagai and Kolstad are immigrants, however if both of them were placed in a room Homagai would most likely be labeled as the immigrant since Homagai doesn’t have that stereotypical American look. This whole idea of labeling one person as an immigrant and disregarding the other makes being an immigrant sound like a bad thing, despite it simply meaning being born outside the country. Since President Trump has advertised immigrants to be “rapist”,”killers”, and “bad” people, many don’t want to be viewed as an immigrant, and are afraid of being targeted.

There were more than 43.3 million immigrants in 2015, according to the American Community Survey. The 2016 Current Population Survey found that immigrants and their US-born children make up 27 percent of the overall US population. Which was prominently shown through “A Day Without Immigrants”. The day gave the United States a good sense of the immense contribution immigrants have on the country.

But who is considered an immigrant? We’ve heard of first generation and second generation, but you never hear someone say “Oh I’m a twenty third generation immigrant.” At that point most people will say they were born here. So why should it matter where people come from if most of us have immigrated here at some point. These are people who are just people trying to find a better life. They came to this country but choice. As Franklin Roosevelt put it, “Remember, remember always, that all of us, and you and I especially, are descended from immigrants and revolutionists.”

The irony in all of this is that President Trump, the man against immigration, comes from a genetic background of German and Scottish descent. Meaning he, like many other proud Americans today, have a history of immigrants. Now whether you are a reader, for or against immigration, take a moment to stop and think about where your family came from.