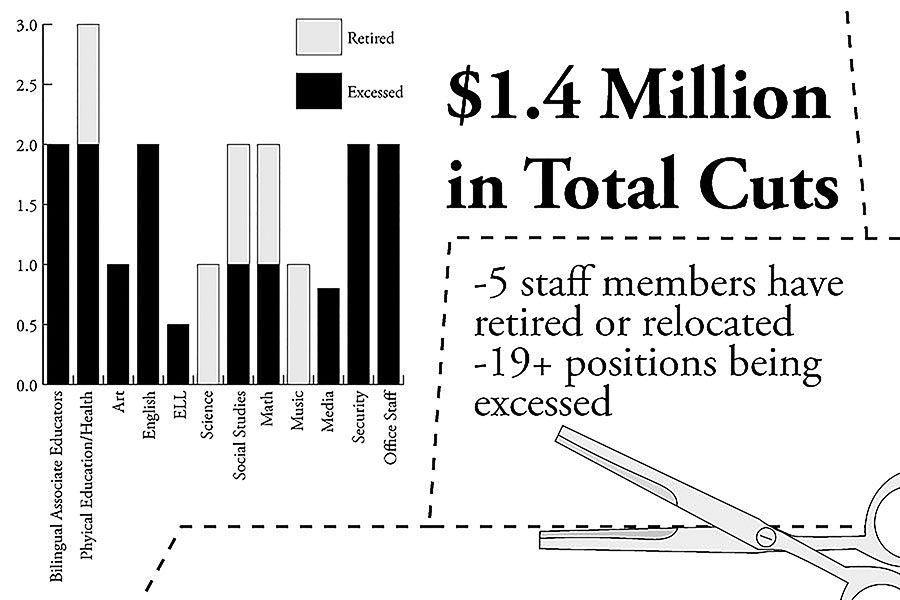 South’s budget has been cut by 1.4 million dollars for the 2018-19 school year. Over 19 staff positions have been cut, and we will change back to a six period days. These changes will result in serious consequences for students and staff. Graphic: Eli Shimanski

The Minneapolis Public School district has projected a $33,000,000 deficit for the 2018-19 school year. The district has made many changes to save money, and they plan on saving a little over ten million dollars by cutting staff at schools across the district. So what does this mean for South?

These budget cuts will have a large impact on almost every department at South, with most departments facing a loss of one to two full time staff. “The distribution of reductions are across the board. Every department will have a reduction to reflect the 1.4 million dollars of reduction at South,” said Principal Ray Aponte. Student Council President Marie Stebbings is concerned about how these cuts will impact South: “I think we’re going to see a lot of reduction in staff, an increase in class sizes, and therefore a really big decrease in both the quality of the school environment and the quality of teaching,” Stebbings said.

Aponte has made clear that when it comes to classes at South, student choice is a top priority. “It’s a difficult process but part of what I have been trying to do is preserve the essence of South High School. Which is the ability for students to have choice, the high level academic programs we have here, music, art, theater. All those types of programs students have become accustomed to at South over the 25 or 30 years it has been around,” Aponte said.

Johnson explained how the budget cuts will affect students: “We’ve already seen some of how the impact on South has manifested itself as teachers losing their jobs. We know sort of anecdotally that most departments will see at least a one to two teacher loss. So this will result in not getting a seven period day, and without a seven period day students will have a lot less choice.”

These hard choices will affect many parts of a students day. “Study hall won’t be an option anymore and that’s going to really affect students who play sports, or have jobs or have other things they have to be responsible for outside the school day… you’re going to see increases in class sizes too. Big classes are going to get bigger and that’s gonna affect the culture and climate of those classes, and it’s going to affect the way the teachers are able to teach,” said Johnson.

Aponte has confirmed that South will be going back to a six period day next year, but he hopes that the impact on class size will be minimal. Aponte is expecting averages of 26 to 28 students per class.

Many staff at South feel that the cuts are too drastic. “My understanding, from my union representatives, is that [the district] is taking caring of a decade’s worth of problems in a year or two’s amount of time,” said Math department chair Kip Krasean. Science department chair John Rozeboom had similar feelings. “It took them a long time to get that amount of debt and unfortunately it sounds like they want to try to get out of debt as soon as possible with making some cuts to the buildings that are going to be pretty difficult to live with,” Rozeboom explained.

Social Studies Department co-chair Abby Gaul would like to see less budget cuts in schools and more at the higher level: “I’m sure they’re doing some cuts but it just feels like they’re forcing the schools to swallow these cuts. I feel like at some point there has to be major cuts at the district level.”

Johnson thinks the new superintendent may not be making the right decision. “I’m not an expert, but from my perspective it feels like the new superintendent inherited what he considered a bit of financial mess and a model that was not sustainable in terms of how much money was being spent every year. And that, being new to Minneapolis, he lacks the understanding of what kinds of money should actually be prioritized and what systems have proven valuable to certain schools,” said Johnson.

“The English department is being cut two full time teachers. That means that in addition to losing two valuable members of our department, people that we’ve worked with for several years… if my class sizes go up much higher than they are it’s going to affect how much I can give intensive specific feedback on student’s writing,” Johnson continued.

The math department has been cut two positions, with one of those teachers voluntarily leaving. “We are losing two positions which really means, to the students, we’re going to lose ten sections we teach. We have to determine as a department how we’re going to do that. The administration has allowed us the leeway to do as we see fit. So, we have to determine that soon,” said Krasean.

The science department is being cut approximately one position. However, the Science Department Chair, John Rozeboom, is retiring. For Rozeboom this year was the right time, “the amount of money that they’re offering is actually irrelevant.”

Social studies has been cut two positions but has one teacher who is either retiring or leaving. (Which teachers are leaving and their reasons for leaving have not been disclosed at this time.) “The budget cuts this year are so deep that basically every department across the school is being cut. I am one of the social studies department chairs and our department specifically is being cut two full time employees,” said Gaul.

Two security positions have been cut. Security guard Russel Smith says that even if his job is cut, he still feels okay, “I have another full time job; I’ll be fine.” Smith feels that cuts will affect people other than the staff themselves, “It’s gonna hurt [students] as far as their growth, some students have relationships with different staff that they trust and they’re not going to be there anymore,” he said. “I think staff will be able to find a job elsewhere, but this will really hurt the kids.” Two clerical positions have been cut as well.

The music and art departments both lost a full time position, though the music department also will have one retirement or relocation.

Bilingual associate educators been cut by two positions. “One department that’s not getting cut is Special Ed., that is being fully funded. And I think that is a really good thing…. I think the principal is planning to maintain quite a bit of the support staff like counselors and social workers… so that’s a good thing,” said Davis. Other areas that are not getting reduced are the counseling and social worker teams. Counseling and Special Education were both cut last year. Each counselor and social worker has specific students who they work with and some students have specified circumstances that need to be known. Therefore, switching around who has a student’s information can be complicated.

Many teachers believe that South is doing the best they can. “I personally think that South is handling the budget cuts as best as possible, because it’s a really, really tough situation. It’s a lot of money that he has to cut… I don’t know what the alternatives would have been,” said Davis.

Stebbings said, “I think [South’s] administration right now is doing the best they can to preserve jobs, and preserve the students. I want to encourage and support them to keep doing what they’re doing.”

However, many staff and students don’t think these cuts were the right choice. “I think [trying to close the gap so quickly] is a little short-sighted. I that definitely we need to fix the budget but I think there are ways to fix the budget that don’t create the the hardships that it appears that this is going to,” said Rozeboom.

On Tuesday April 10th, the Minneapolis school board voted 5-4 to change the budget recommendations effectively restoring $816,000 back to South. According to Principal Ray Aponte the following positions have been restored at South: 1.4 to world languages, one to the art department, one to physical education, one to social studies, one to the math department (allowing the math center to remain open throughout the day), 0.6 to orchestra, 0.5 to the ELL program, and 0.3 to the media center.

Many staff and students at South are excited about the money that was restored, but Aponte is more concerned with the long-term future of MPS. “I love Minneapolis Public Schools, it’s been my life for thirty-two years…I bought what [the Superintendent] has to say. We needed to cut thirty-three million dollars to stay viable…I was a little disappointed,” said Aponte.