In with the New… 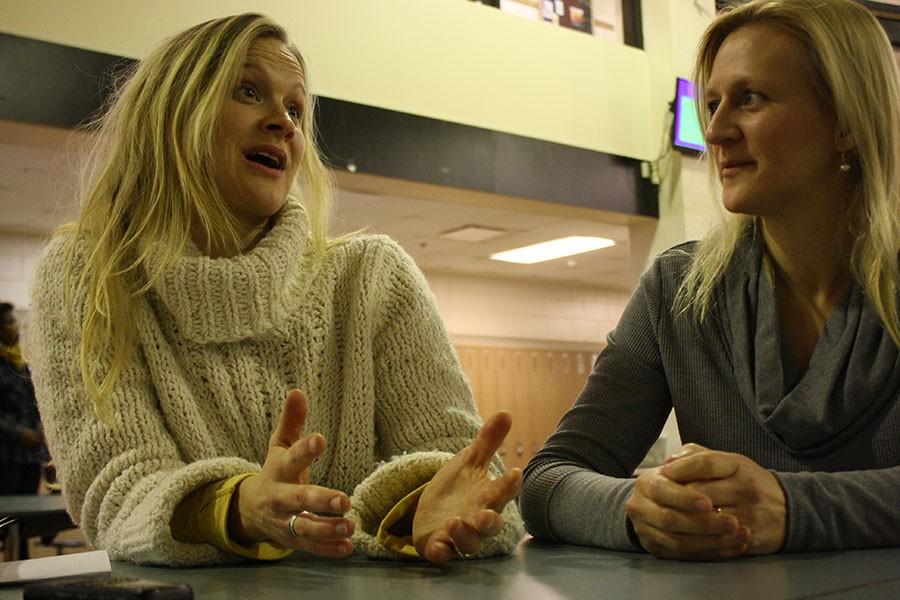 Nicole Lundheim (left) and Melaine Lundheim (right) talk about what South was like to them in the late 1980’s and 1990’s, while sitting in the South Commons area.

Walking into South High School, we’re greeted by the security guards chanting one of their mantras, “I.D.’s please!” or in the winter, “Hats off!” We stumble into the Commons, greet our friends, and hustle up to our lockers to shed our many Minnesotan layers. Most days, Mr. Aponte is walking around with a smile and handling the various student complaints.
As you walk through the building, how many of you have ever thought about who’s walked this same route 10 years ago? 20 years? 40? Looking into the past of South explains all of it’s quirky characteristics including why we don’t have windows, or why our second floor is like a rabbit maze.
I was able to get in contact with Melanie and Nicole Lundheim, graduates of 1990 and 1993, Molly Hensley-Clancy graduate of 2009, and Felicia Johnson, graduate of 2010 to talk to them about what South High was like for them.
I contacted Melanie about coming to South and taking a tour of her old school. She brought her sister-in-law Nicole along too. When Nicole and Melanie went to South, the biggest things they remembered were the people and the extracurriculars. “There was so much camaraderie among students here…it felt like a family,” Melanie told me in our interview, and explained that being hugged by all her friends in the morning was one of her favorite memories.
When they went here, the whole school came together to help each other out. For example, in 1988, the counselor let Melanie use the phone to win Prince tickets off the radio. She ended up getting seats in the 4th row!
In their years here, they held carnivals in the Commons, decorated their cars before the Homecoming parade, and even decorated their lockers during Homecoming week.

“We would have a half day and you would be allowed to go out in the parking lot and decorate your car. And then at a certain time, during the school day the parade would start,” Nicole said about her fondest memories at South.
Felicia Johnson, graduate of 2010, remembers her favorite teachers like Mr. Niemiec, Mr. Nohel and Mr. Winnes. All of their efforts and dedication to their students helped her as a student at Macalester.
“My senior year, we won the women’s state basketball tournament!” said Molly Hensley-Clancy, “That was a huge deal, and it was so exciting to be at the game. We’d lost the year before and it was heartbreaking. Tayler Hill, the star of the team that year, is now in the WNBA.” Hensley-Clancy was a member of the Southerner as well, and frequently spent her time in a small closet-sized newspaper room.
When I interviewed Melanie and Nicole, they both commented on how the diversity of the school was virtually the same, and how people are even still dressed the same. Back then, they had a large population of Hmong and Asian students, where now we have a greater East African student population.
Hensley-Clancy told me in an email, “South was always diverse, but I think very segregated. If you were in the selective magnet programs you didn’t have many classes with people in the regular neighborhood program. The selective programs were more white and affluent, so most of my friends were white and affluent, too. Even when you had classes with people who weren’t in the selective programs, you usually didn’t hang out with them much in class.”

South has always been known for being diverse, but the school has always had a degree of segregation. Johnson had this experience at South. “I remember volunteering with NHS at People Serving People in downtown Minneapolis… Another South student walked in a bit later, but not to volunteer, to get something to eat. As soon as this student saw us, they left. This is not diversity in the positive sense of its meaning. Schools need to be able to confront such issues instead of making race, class, and gender so removed,” Johnson wrote to me in an email.
Even though our school does seem to be segregated at times, the diversity has proven to positively influence us going into our future. “I do… think that my time at South has made me so much more aware of my positionality and thus, much stronger because of the interactions that I had there,” said Johnson, “I think that I am more prone to considering the backgrounds that others have before judging them as a person and I think that I am more appreciative of small actions and basic needs.” Johnson now lives in Sweden and works as a project manager for the Council on International Education Exchange.
For Hensley-Clancy, who is now a reporter for Buzzfeed’s educational division, “South made me start thinking about things like race and class a lot more and a lot earlier than my peers in college who went to private schools or wealthy public schools did, which I’m really grateful for…it sowed seeds of activism and a desire for social justice.”

The seeds of activism Hensley-Clancy mentions have now grown into trees here at South. Over the past four years, South has stood in solidarity over the deaths of Jamar Clark, Michael Brown, Tamir Rice and more. We walked out in support of our All Nations program in the Idle No More sit in and walkout. We’ve established groups like students together as allies for racial trust (s.t.a.r.t.) and Stand Up Speak Out South High (SUSOSH) that have important conversations about race, gender and student leadership.
“We were treated like adults in a lot of ways,” said Melanie, “We were held accountable for our grades and they didn’t crack down too hard, and in the real world, no one’s cracking down on you anyways…South High gave me a lot of street smarts and the ability to fend for myself and find out what I need to learn on my own.”
It’s been truly insightful to see that in a span of almost 30 years, the spirit of South High hasn’t changed. South continues to have an incredibly successful and tight-knit community that could be attributed to our complex diversity, and we make sure that there’s a place for everyone.
We are a school built on student involvement and activism, and our alumni such as Felicia Johnson and Molly Hensley-Clancy show how our school breeds successful people. But South still struggles with handling and catering to our diversity. Self-segregation between races, religions, and programs still occur. As a school, we need to strive to close our achievement gap on a school-wide level and integrate between programs. Maybe by bringing back Sno Daze carnivals, homecoming parades, and selling of buttons and t-shirts we can bring back this school-wide unity.

This article was published as part of the center spread in the 2015-16 Winter edition of the Southerner. Read the second half at here.