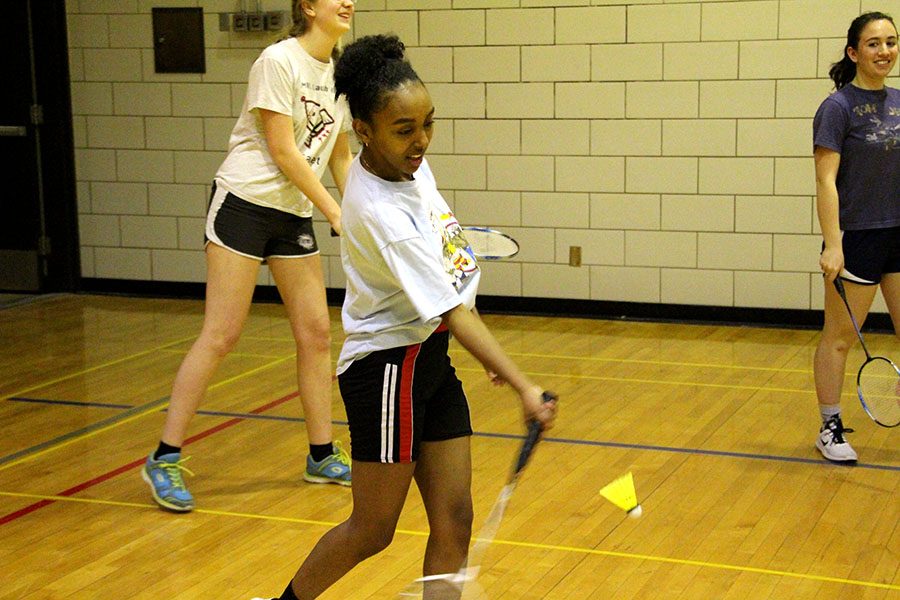 Senior Derartu Ansha warms up with a few shots at badminton practice. Ansha has been playing badminton for four years, and is open to the idea of the sport not being exclusively for women, “I think it would be fun to play badminton with all genders because it’s just a fun sport so why not bring them all in?” Photo: Izzy Willette

Badminton’s ‘Girls Only’ sign prompts question: Who is Title IX for?

While Tile IX protects female athletes by stating, “no person shall, on the basis of sex, be excluded from participation in, be denied the benefits of, or be subjected to discrimination under education programs receiving federal financial assistance,” South Athletic Director Amy Cardarelle said, “it doesn’t work in reverse.”

Title IX was passed by Congress in 1972 in order to address the lack of funding and opportunities for women in school and specifically athletic opportunities for women. Senior and volleyball captain Rose Letofsky explained it’s “a law that states that institutions, mainly focusing on school, cannot discriminate on the basis of sex…and have to give pretty much the same amount of funding for female sports and male sports.”

“Football is such a huge sport, with a huge amount of numbers so sometimes you may need two women’s sports to compensate for that. If you’ve got a football team of 70 and you’ve only got a volleyball team of 20 you’ve gotta look at adding another sport…And if you are going to cut a girls’ sport you definitely have to cut a boys’ sport,” explained Cardarelle.

In response to a ‘Girls Only’ sign that was attached to the spring Badminton team sign up table, Developmental Adaptive Physical Education (DAPE) teacher, Head Football, Assistant Basketball, and Badminton coach Rodney Lossow said, “[it’s] a Minnesota State High School League mandatory requirement. No boys are allowed to play [Badminton]…[Title IX] always applies towards females where females can participate in male sports. I have never seen it reverse applied.”

While Title IX has provided more athletic opportunities for female students, and allowed for the participation of female athletes in traditionally male-dominated school sports, it’s sometimes unclear what constitutes equality between male and female gendered sports.

“One of the biggest things with Title IX is equality, but not equality per sport, equality per participation. If you have a male sport you gotta have a female sport and so forth. Now there’s a lot of issues that go with that: gym space, supervision, [and] qualified staff to supervise,” said Lossow.

Senior Thomas Mckinney explained how he was disappointed to find out badminton was ‘girls only,’ “I thought it was co-ed. Having a co-ed badminton team would be cool, and I think then I would consider joining. I was just asking around and people just said, ‘Oh you can’t. It’s an all girls team.’” Senior badminton player Derartu Ansha said,“I think it would be fun to play badminton with all genders because it’s just a fun sport so why not bring them all in?”

Title IX can come in handy for female identifying students who petition to participate in a male dominated sport like football or baseball, but Senior Elycia Willis explained that when she decided to sign up for the football team, “it wasn’t really a process…I just signed up.” “Females can play football. Once again male sports…You sign up and if it’s something you enjoy and you can adhere to the covenant we apply, you play football,” said Lossow.

Letofsky describes a similar experience when she joined the baseball team, “the summer before freshman year I played the summer league with–as a part of the South team–and as far as I remember I really just signed up and went to practices and that was that.”
Letofsky explained she didn’t believe Title IX should “work in the reverse” as a way for men to play traditionally female dominated sports like badminton or volleyball, “I want to say no just because there are already more opportunities for [men], but under the law they technically can.”

“During winter olympics a bunch of the boys who play on the volleyball team, they’re like ‘I love this,’” Letofsky continued, “they’re trying to get men’s volleyball here at South and a couple other places because a bunch of push from students.”

Mckinney explained he didn’t want to pursue any further on joining badminton because, “I didn’t really feel like it’s something to push for me to play badminton. I didn’t think it was as important. Just cause why should it be important for some guy…to be be able to do more?”

How gendered sport rules and laws like Title IX can be exclusionary towards trans and nonbinary students at South is up for debate. “There’s new policies and procedures have to be brought up all the time and figured out so that there’s a standard for us to follow.

This is where there’s all this grey area… and I think we’re tackling that issue,” said Cardarelle. “In 20 years we’ve come a long way. Is there still room for growth? Yeah. I’m hoping the trajectory keeps going up and not backwards.”