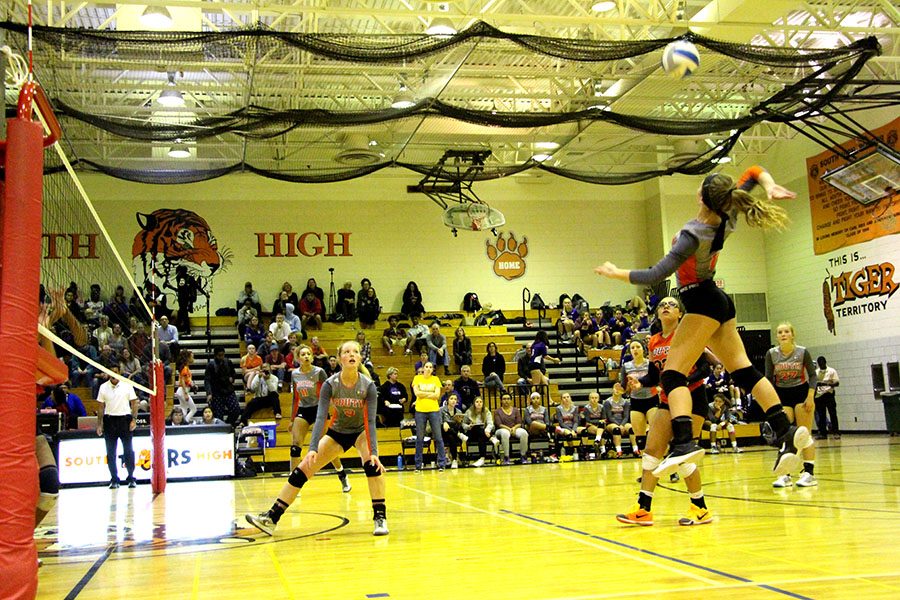 “We just wanted this game so badly. We have been looking forward to it since my sophomore year,” said senior and varsity volleyball player Rose Letofsky on South’s showdown against Southwest on October 5th. Although South lost the matches, (15-25, 21-25, 24-26) they did not appear to lose the hearts of the many fans who showed their enthusiastic support of the team.

“I’m impressed, I think we have a really nice varsity team,” said sophomore Ian Mackimm of the the team’s performance. Sophomore Sylence McKinnie spoke of the players as well: “They performed really well…loving each other, caring, helping each other, picking each other up.”

“First set we didn’t come out like we wanted to but we did still play really well. Second set we were more where we wanted to play, showed them more what we could do. Third set we really came out and were ready to go,” said Letofsky.

The volleyball team demands commitment; the season begins in June, and continues throughout the summer before tryouts in the weeks before school, and ends with the fall season. “[The commitment] shows how passionate everyone is in this program about this sport and this program,” Letofsky said. “Volleyball is a huge part of my life… it’s where I’ve met some of my best friends and have some of my best memories.”

Audience is important to the team. “We wanted people to come, we really feed off the energy of the crowd,” she said. “When [spectators] get excited, we get excited.”

Although South did not win the games, Letofsky, McKinnie, and Mackimm were all satisfied with the team’s performance.

“We fight hard like we just did, we do our best we can,” said McKinnie.