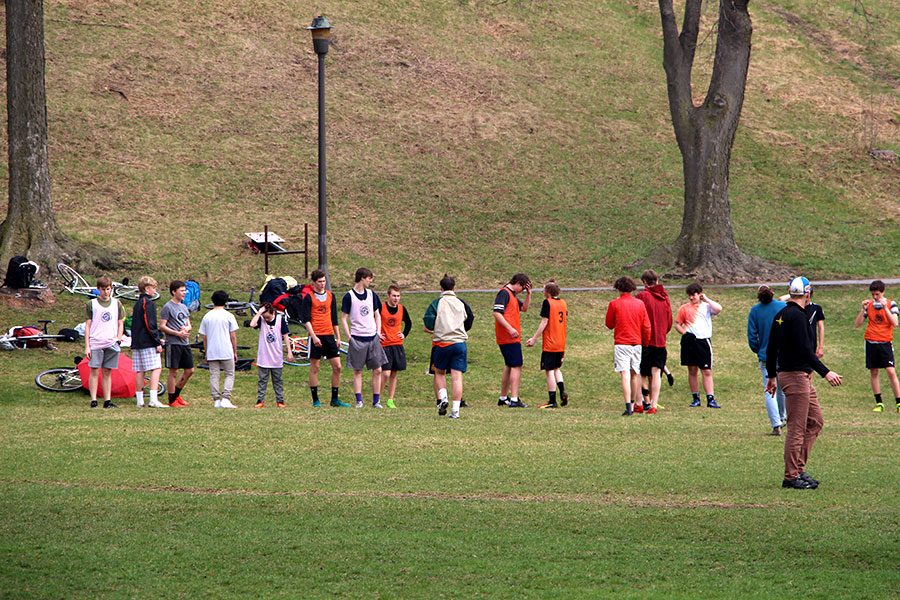 Pictured above the boys Ultimate Frisbee team practices at Powderhorn park. While many sports have gone down in numbers the participation in frisbee has surged in recent years. Photo: Livia Lund

Although South’s ultimate frisbee team has existed in some form or another since 2001, it has drastically exploded with popularity in these last few years.  South has frisbee teams playing in both the Fall with an all-gender inclusive team, and in the Spring with a men’s and a women’s team.”  This year has had a especially large number of students joining ultimate, oftentimes from other sports they were a part of.

Sophomore, and ultimate player Shane Stodolka commented on this increase on the boys ultimate team this Spring, “Last year there were only six or seven freshmen joining the sport [who were] new, and this year there are like fifteen new guys joining, so there’s a lot more people joining ultimate and a lot more attention for the sport.” His thoughts about the reason for this new growth were, “I think it’s because of the popularity of the sport and how fun and engaging it is for a lot of people…It’s not very competitive in the sense that it’s a team sport where everyone is very friendly and there’s not many team rivalries and most of the teams have a lot of fun with each other playing the sport.”

The ultimate team currently has around 60-70 players, an impressive growth considering the sport has only existed since it was brought to the Twin Cities in 2001.  Stodolka said this of ultimate’s uniqueness, “A lot of people are very nice and the coaches really help the sport along and all the people that join are really engaging and really like the sport and it makes it a lot of fun to play.”  Due to ultimate not being technically affiliated with South High or the Minnesota State High School League (MSHSL), it instead runs through its’ own league, the Minnesota Youth Ultimate (MNYU).  Due to this, ultimate is not required to follow any of the rules and regulations set in place for sports by the MSHSL and therefore is not allowed to be officially recognized as a sport by South High.  This additionally means that ultimate does not receive funding by the school as other recognized sports do, but also does not have to follow school policies or even state policies regarding any sort of regulation.  Instead, the MNYU follows the rules outlined by USA Ultimate, a nationwide organization.

Although ultimate’s numbers are surging, some Spring sports’ numbers are declining.  Sophomore, and baseball player Sean Bandy cites two sources for a decline in baseball participation, “We have lost a significant amount of baseball players over the past two years to ultimate frisbee and we used to have three teams but now we are down to two teams because of the number loss.”  Senior, and four year veteran of South Baseball, Isaias Bruggeman Cohen explained the change in numbers, “My freshmen year we had three different programs and this year we only have two programs because we didn’t have a lot of kids trying out and we lost a lot [of players].”  Bandy noted, “People are leaving because…the coaches were not up to par with how the players liked to be treated, a lot of players looked at frisbee as a fun, easy sport to participate in.”

Cohen also echoed that other sports have been pulling baseball players, “They’re [players who left] not having fun or they’re not enjoying the game at all so they would rather do some other sport.”  Baseball has recently gone from sporting a C-squad, JV, and a Varsity team to only a JV and Varsity team.  Bandy comments on the offset induced by the lack of players, “So now we have freshmen on the Varsity level and we are having eighth graders play JV which seems a little weird because we are going to be playing teams that are Juniors so we will be playing these eighth graders that are playing against Juniors which could be scary for them.”  Cohen is understanding about leaving a sport if it isn’t giving enjoyment, “If you aren’t having fun, I understand [leaving].”

The effects reach farther than an unusual team makeup, “Our whole team is not going to be able to play at the best of our level because of the knowledge…of the game and what to do with it, how to play it.”  Said Bandy about the team’s ability to compete.  He worries about the impression that this is giving South’s baseball program, “It’s kinda embarrassing because we went from three teams to two teams because nobody wants to play which to me makes South seem like, ‘Oh they’re not good at baseball because they only have two teams.’”

Track member and Sophomore Cameron Ausand echoes a similar story with Track, “Track’s numbers are lower than last year’s. We’ve gotten a few new people but not as many people as we’ve lost.”  Ausland notes that the loss is mainly to longer distance runners, “It hasn’t really affected sprinting but for distance there are still a good amount of guys, but not a lot but there are definitely not a lot of girls on the team.”  Freshmen, and two-year track runner, Jocelyn Ferguson said,  “[Distance player numbers]They’ve went down definitely a lot from last year to this year.  Last year we had a lot more girls [on the distance team]…and a lot of people have quit and the numbers have gone down so much that we can’t even do some events because there isn’t enough people.”  Like Bandy, Ausland highlights ultimate as a faucet for the drain of players in recent years, “[They leave because] Either they’re just lazy or they do other sports.”  Ferguson cites another source of the decrease in athletes, “People heard no one was joining the [distance] team, so no one wanted to join the [distance] team.  So it was people following the pack.”  She finished with, “There are less people which is taking away the ideas of having a team… teams with more people are going to do better.”

“I played ultimate frisbee for a long time and it is a very fun and engaging team sport.” Said Stodolka when asked what made him originally decide to join ultimate.  “A lot of people from other sports have been joining ultimate, and it’s a very open sport and easy to get into and it’s fun to play and if you want to play it, it’s fun.” Stodolka elaborated about ultimate’s appeal.

Although participating in very different sports, all the athletes share a common appreciation and enjoyment for their current sport.  Stodolka expressed satisfaction with ultimate’s current state when asked what he would like to see changed in the future, “I want it to continue being as it is now, it’s very fun.”  Ausland spoke of the uplifting experience of discovering your own capability, “The meaning of track to me is to push myself past what I thought I could [do].”  Ferguson mentioned the appeal to running, “The more you run, the more it’ll get easier and you’ll enjoy it.”  Bandy said this of his life’s experience with baseball, “I started baseball (or teeball) at 4 years old and it was fun because you got to mess around. Now as I am getting more advanced in baseball you can definitely see all the strategy and for me I love the strategy and everything.”  Cohen said, “It’s been fun and I got to meet a new friend that’s been a close friend of mine now…Making friendships is part of the game in order to play well together.”