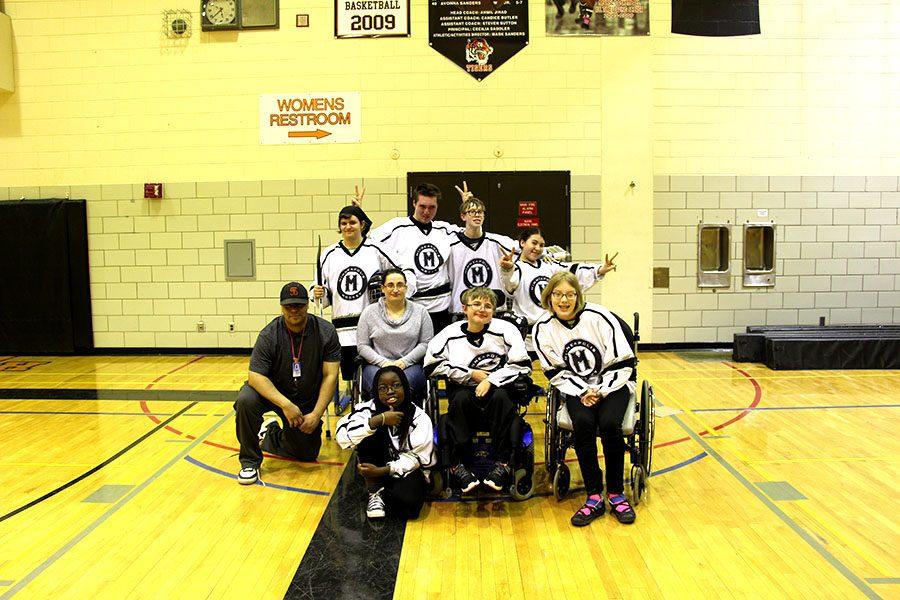 Pictured above: South’s adapted floor hockey team poses for a team photo after their massive win against South Suburban. The team looks forward to making it to state this year which will take place on March 17th and 18th. Seniors on the team include Hanna Bolstrom, Mark Runquist, Mohammed Mohammed, and Noah Novacek. Photo: Henry Holcomb

South High has had adapted sports for many years but the program remains at a lack of exposure and support from the South High community.  South has had adapted sports since 1982 when Jim Christy, -a man who was instrumental in creating the adapted athletics program we now see in Minnesota- first began coaching adapted floor hockey, but the stands at South’s home game against South Suburban on February 13th yielded only a handful of spectators.  For a home game, a showing of at best 15 spectators -almost exclusively parents- is unheard of in other sports, but is sadly a normality for adapted sports events.

The adapted floor hockey game on February 13th lacked advertisement and promotion, there was no lunchtime announcement or any widespread indication that a game would be taking place that day.  It would have difficult to locate the entrance to the game, the doors were closed and there was no staff stationed to help guide spectators and purchase tickets from that you frequently see at basketball, soccer, and volleyball games.  It was only a couple of minutes into the first period when South scored their first goal; a well played combination of skillful teamwork and athletic effort as the player dodged around the defensive sticks of the opposing team.  After the goal the team chimed in with a series of congratulations that lay the foundation of what would become  a game that is a model example of what sportspersonship should look like at South.

The team consists of ten members; two goalies, two defensives, and two offensive players.  They are pulled from around the Minneapolis district and but the team is primarily made up of South students. Besides ourselves there are around eleven other teams across the state.  The game functioned very similar to ice hockey rules with referees calling offsides, time-outs, and other penalties.  The February 13th game was very fast paced and engaging with South’s team making skillful plays and being in general a very enjoyable game.  This teamwork is the main focus for coach Jackie Pennaz, “I like to say that not one person wins a game, and not one person loses a game.  Everyone on the team plays a huge part.”

South’s team is good, ending off the game with a impressing win of 13-3.  Athletic Department Secretary Lynn Heldt had high regards for the team saying “Yeah, we always get to sections every year in the division but we’ve been ranking in the top four, I know [adapted] soccer got fourth or fifth place this year and last year they got fourth place I think.  So they do end up going to state occasionally.”   Going to state hasn’t been the only success for the adapted sports program, in 2015 Becky Moore, a South High student and adapted sports player became the first recipient to receive the Athena Award, a very prestigious acknowledgement of success in athletics.

Unfortunately, the adapted sports program is facing problems with spectator attendance and stigma surrounding physically impaired students involvement in sports.  Heldt is proud of the team’s success but is disappointed by the lack of support from the community, “We don’t get very many kids here that are going to their games.”  Heldt noted.  The absence of support reaches beyond the walls of South to the media in general.  Pennaz commented saying, “Adapted sports don’t really get exposure at all in the media.”  This lack of information and communication has had several serious consequences with a decrease in spectators, and perpetuating stigma about the legitimacy of adapted sports and the safety of adapted athletes.  Athletic Director Brett McNeal echoed this, “I think people are afraid… [they]  have a stigma unfortunately.  I think if they [physically impaired students] participate and play they’d find out that it’s just as fun as playing another sport and they can be just as successful and actually enjoy what they’re doing.”  Pennaz, a South alumni experienced something similar to this when she played adapted sports for South, “I started off really unenthused in high school but then I actually ended up really liking it and I liked the relationships I was able to get on the team and learning what I’ve learned.” the stigma extends to parental views as well, “A lot of their parents are too worried they’re gonna get hurt so part of getting them to play and convince their parents that it’s okay.” Said Heldt regarding the cause of the decrease in players for adapted sports.

Due to this stigma potential participants in adapted sports miss out on valuable opportunities to be a part of the uplifting experiences that come with being a adapted sports athlete.  A lot is to be gained from being a part of this program, not only physical activity and team building skills, but also a sense of pride and empowerment.  This is echoed in the experience of coach Jackie and her players.  Senior Hanna Bolstrom, a four year participant in various adapted sports and captain of the team voiced her positive experience,“I have been really proud of myself because I have been great at adapted sports…I love everything in Adapted so I feel really happy to play them.”  When asked what her highlight of the season was, Hanna replied saying, “Being with the team… I’m the captain and I get to talk with people, [and] it’s a pretty good team.”  Bolstrom loves the team but wishes for more support, “I want to see more people come to these games…I think people should see this, this is not like regular hockey, this is adapted hockey.” Nevertheless, the low quantity of spectators did not dampen her hope for the team to reach state this year as they have clearly done in past years with the many banners on the cafeteria wall displaying the team’s success.

In the end, the benefits of adapted sports on students are very similar to other non-adapted sports, which were very eloquently highlighted by McNeal, “It helps you meet new people, helps you learn how to be an individual but also a team player, teach us how to win gracefully and lose humbly.  There’s just so many things we can learn from sports and activities.”  McNeal also highlighted that they are a great release for stress and negative emotions.  Pennaz mentioned that the sport has a special significance for physically impaired students, “I believe that being a part of the team affects the students in a huge way. They have a place where they belong. That everyone they are around is an equal to them. Nobody is better, nobody is worse. We are all different, but we are all the same, and I think that is very important. Especially in a school where it would be so easy to be ‘invisible.’”

For these students the team is an accepting and welcoming community that is a source enjoyment and empowerment.  Heldt also stresses the important bonds formed between the teammates, “I think it really benefits those students because they are [benefited].  It keeps them out and part of the team and more active, they really have a cohesiveness and at least four of those kids have played for four years… they are really tight knit… so I think it gives them some tie to the building.”

Other than breaking down the bias and drawing in the crowds Pennaz hopes that people’s ideas of the legitimacy of adapted sport will change.  “I would like to see adapted sports being treated like more of a ‘real’ sport. Because it is. The kids on this team are working their hardest and doing their best, just like the football team, basketball team, etc.” McNeal has similar thoughts, “We want them to be as recognized as any other athletic sport or sporting event in our Minneapolis district.”

McNeal is working towards addressing some of these issues with exposure and lack of attention being given to adapted sports, “It’s information, it’s communication I think…So a lot of it is having a person that can really get that information out, that can really communicate to parents and families, destroy that stigma about what it would be like to participate on a team like that and really just talk about how fun it is, how much the students enjoy, how successful they are, and how successful they can actually become.”

He is currently in search of a Athletic Director designated for elevating adapted sports, “Well we’ve been as Athletic Directors, we’ve been really pushing to find an adapted athletic director that can totally focus on our adapted sports across the Minneapolis district and allow that person to focus on growing the participation and sharing information with the community and our schools about how successful they are, how fun it can be, and really getting people excited about participation; trying to increase numbers and destroy that stigma.”  Pennaz has some of the same thoughts, “Kids don’t often know that there is a sport like this that they can play.”

Adapted sports lack the most basic thing they deserve, to be recognized and supported by the South High community.  Although they are one of South’s best performing teams, South as a whole does not acknowledge that.   The games are very skillful and are a blast to watch, the teamwork demonstrated is unparalleled, and it is a perfect way to support one of our teams that is the model example of what it is like to have tiger PRIDE.  I encourage South as a community to support our adapted teams.  They run throughout the school year with adapted soccer in the fall, floor hockey during winter seasons, and both adapted softball and bowling taking place in the spring.  South’s next adapted floor hockey home game, and final regular game of the season is on February 28th in the gym.