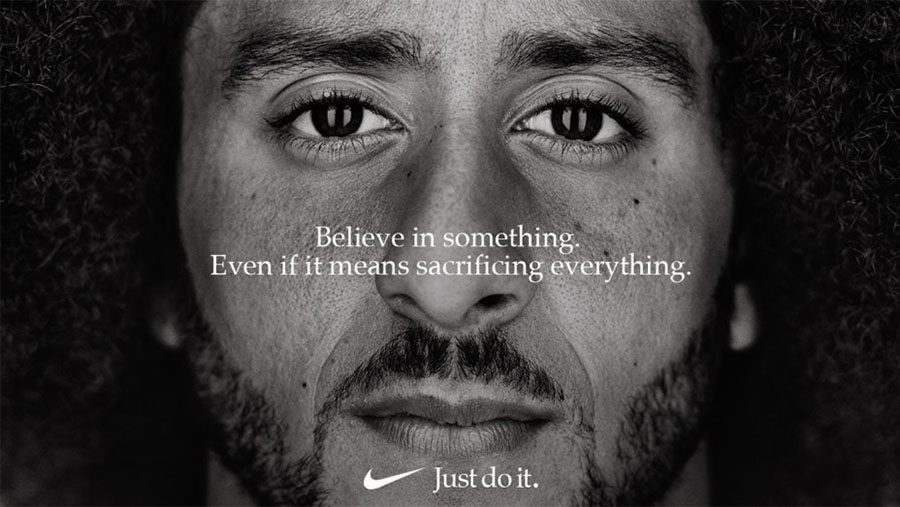 Nike’s ad released in early September shows support for Kaepernick acknowledging his perspective and sacrifices in protesting for social justice. Although this is a great step forward for progressive movements, it has shed a light on Nike’s own discrimination issues.

With a quarterly income of 3.4 billion US dollars and universal popularity across the majority of demographics, Nike holds a status every brand works for, appealing to everyone on the political spectrum.  However, during the last month Nike has finally taken a stand on the most prevalent politicization of sports in 2017 with their divisive ad starring former NFL quarterback Colin Kaepernick. This ad shows Nike’s support for Kaepernick’s past protest of police violence against the black community. Kaepernick protested this violence by taking a knee during the national anthem on the field at his games.

Nike’s ad starring former NFL quarterback Colin Kaepernick, professional Tennis player Serena Williams and Nike skateboarding athlete Lacey Baker has set a new standard in business.  Although the ad was a progressive step away from our country’s ever-growing socially conservative environment that openly discriminates against a slew of marginalized groups, it sets a dangerous standard of unauthentic corporate political stances when in reality corporations like Nike prioritize profit over people.

With our current highly intensified political climate, more businesses are starting to take stands against social conservatism. Nike was not the first and won’t be the last.  However authentic interest in the issues companies claim to stand for is important, and Nike certainly does not actively show practices that align with their ad.

Nike has a long history of utilizing unethical and illegal sweatshop labor in order to produce a larger volume of products for a cheaper price point. This is an ironic distraction from their entire ad campaign which spreads the message of respect for marginalized groups of people. The reality is that they themselves are contributing to the oppression of people on a daily basis.

Since the brand was founded in 1964, they have used sweatshop factories in countries like China, Thailand, and Sri Lanka. Nike was able to gain more profitability  before 1990 because they were one of the first companies to outsource sportswear production, allowing them to manufacture products at a significantly lower price then their domestically-based competitors. The majority of consumers were unaware of the working conditions and malpractice being perpetrated specifically in factories located in Asia.

During the 1990s as other companies started to globalize their production centers to produce lower-priced products in foreign markets, consumers became aware of hard truth: that Nike had been utilizing child labor and unsafe working conditions in order to produce their products for a fraction of the average cost.

The questions consumers now face: is Nike right to stand up for the rights of historically oppressed people of color when they themselves contribute to oppress people of color across the globe? As well as calling for the support of women and LGBTQ+ people when they themselves have an extensive history of oppressing those people in the workplace? Clearly, because of their unethical practices in the workplace, Nike’s interest in the issues marginalized groups in the US face is not completely authentic and truly felt.

As junior Andrew Thoraldson said, “It’s not right [Nike is] being compensated for [the movement of] people of color… it’s just not right.”

However, the fact that Nike has created a precedent for companies to stand against the struggles of historically oppressed people by becoming platforms for promotion of social justice outweighs the flawed interest from Nike themselves.

Because of the stance that it takes, Nike’s ad is working.  The company has seen a 30% increase in online sales over the last month as well as closing stocks at the highest recorded value on September 14th.

Although in the ad Nike does not explicitly present a message in support of Black Lives Matter or other organizations that Kaepernick has affiliated himself with, the backlash from predominantly white conservative supporters surrounding those organizations and their messages specifically has been astounding.

Even President Trump has thrown his hat into the ring tweeting “Nike is getting absolutely killed with anger and boycotts, I wonder if they thought it would be this way!”  Along with President Trump, many conservatives have made their perspective clear.  Some of the most vocal critics are burning Nike products and sending death threats to Nike executives.

However what the protesters who disagree with Kaepernick’s original protest of the national anthem seem to fail to grasp is the fact that they already purchased the product. Nike was already compensated for the product, meaning the only one experiencing a loss from their protests is themselves.

Conversely, supporters of Kaepernick and the organizations he is affiliated with have been presenting very vocal support for the brand, the most predominant being actress Jenifer Lewis who wore an entirely Nike outfit to the 2018 Emmys.

Yet now that the situation has winded down and the backlash has receded, what happens next? Is activism going to be the new standard for companies to make a quick dollar?

We live now in a political culture where everything is polarized yet progressive social politics are becoming the new societal standard. Although our country’s views on issues such as LGBTQ+ rights and police brutality against people of color are at a much better place now than 10 or 15 years ago, we still have a long ways to go to improve them. Regardless of the problems with Nike’s intentions or past history, the ad represents a light in the dark of the current government administration for progressive politics and social consumers.