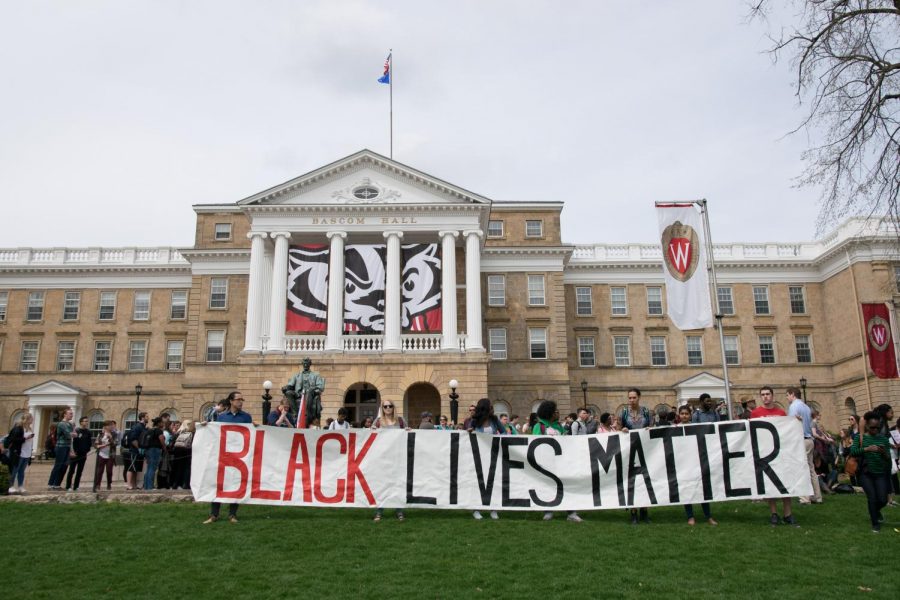 Riley Steinbrenner of the Badger Herald

Pictured above are University of Wisconsin Madison students on April 21st, 2016 protesting the arrest of fellow student Denzel McDonald. With the passing of the Wisconsin Senate’s 229 Bill student protest rights have been under question.

“Freedom of speech” does not mean limiting students’ right to protest

The University of Wisconsin Madison has been at the top of my list for colleges to apply to this fall for a long time. I love that it’s close to home, but not too close, and that it has a complete research facility for the exact field I’d like to pursue. But with a new law limiting the University students’ freedom to protest, I’m not sure I could feel completely comfortable in any Wisconsin public school.

The bill, which was passed into law in June 2017, was intended to punish Wisconsin University students who “disrupt” the speeches of speakers on campus. Specifically it said, “that protests and demonstrations that interfere with the [freedom of speech] rights of others to engage in or listen to expressive activity shall not be permitted and shall be subject to sanction.”

It was most likely passed because of an increase in student protests against speakers who hold conservative viewpoints. For example, conservative journalist and former Breitbart editor, Ben Shapiro was “shouted down” by protesters at UW-Madison for seven minutes during a recent speech at Madison’s campus.

I know personally that I value the right to free speech and would love to be able to someday have that in a University setting. I think that demonstrations would allow for more free speech if students were allowed to engage in open debate with those they’re protesting, but most of the speakers who come to Universities are not willing to discuss students on an open forum.

Many of the Wisconsin senators and school’s representatives argue that this bill is designed to protect free speech. But when Universities bring in speakers who students feel are disrespectful or offensive, they are shouted down because students are exercising their right to free speech by advocating for what they do believe in.

Sometimes, students may also feel that certain speakers could affect their safety. “Richard Spencer, a white nationalist [who] was allowed to speak at Florida University… holds viewpoints that are potentially super dangerous to many students and I think it’s a little irresponsible of the University to even allow him to come there,” said Cleo Rank, a freshman at Madison and 2017 South graduate. She explained that colleges like Madison, “have a good amount of responsibility towards protecting their students’ well being and I don’t think the right to free speech should infringe upon the right to safety.”

Both sides of the argument are arguing claim to free speech, but as Rank said, “there’s a hypocrisy in that if while you’re protecting free speech you’re also prohibiting protestors right to shut down people speaking.” It seems the Madison is stuck in a tight spot. “On one side the freedom of speech is limited by a law and on the other side the freedom of speech is just limited by other people protesting,” said Madison freshman and 2017 South alum Molly Devore.

What seems most confusing about the bill is the process of punishment for those students who are, “limiting speakers on campus freedom of speech,” according to the school officials.  Clearly the Wisconsin Senate has created a three strike program, but what counts as “interfering” is less clear.

The bill defines a student in violation as someone who, “engages in violent, abusive, indecent, profane, boisterous, obscene, unreasonably loud, or other disorderly conduct that interferes with the free expression of others.” This definition is so vague a Wisconsin school could interpret any form of student protest as a violation in order to punish that student.

Furthermore, though the bill was not actually created by Madison itself the University could still do a better job at informing the students about the new policy. “It’s a little weird how it’s going to affect all students and no one knows about it,” said Devore.

The way that Madison is enacting the bill without informing their students about it is making many South students feel like it’s not as good of a choice for college. Sylvie Mercil, a senior at South who is applying to the school of engineering, said the bill has, “moved Madison to one of the schools I’m less eager to attend.”

I was so excited about applying to Madison, but with the recent bill passage it seems like the school is appealing to the conservative population and punishing students who choose to protest by using free speech as the base for their argument. Even though a publically funded school like Madison relies on the state government and therefore must appeal to the state’s best interests, that doesn’t mean there can’t be resistance of the bill in the higher levels of the school’s administration.