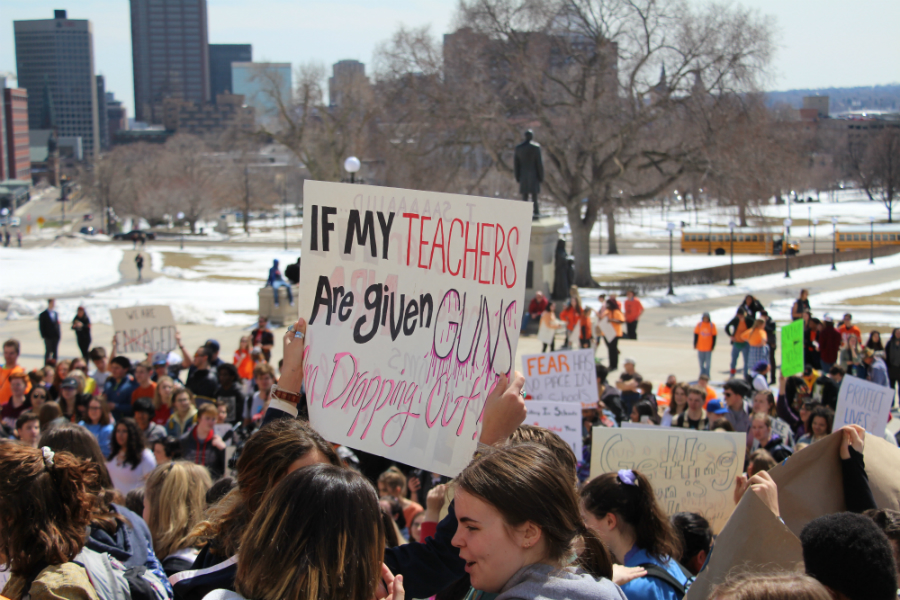 “I am here today because I am sick of the unprecedented trend of gun violence that’s happening across the nation,” said junior Ben Phi, who was one of the speakers at today’s protest.

The protest, organized in part by freshman Isra Hirsi from South, was a gathering of schools statewide to advocate against gun violence. Students crowded the three tiers of steps at the entrance of the capitol, where chants were led followed by speeches made by primarily highschool students.

Before arriving at the capitol at 1p.m., many schools held a walkout, where students left their classes and boarded busses that would bring them to the larger assembly. Sophomore Jakayla Spikes, from Coon Rapids high school, explained she came to the protest to, “protest against gun violence because it’s really bad, and we need to stop it.”

While the focus of the protest was surrounding school shootings, the topic of gun violence disproportionately affecting people and communities of color was brought up. “I am also sick of the ways in which the gun violence prevention movement has been whitewashed, by say, the Parkland highschool students,” said Phi.

The chants ranged from, “What do we want? Gun control! When do we want it? Now!” to, “Hey hey, ho ho, the NRA has got to go” and finally, “Black lives matter!”.

Phi explained that to them, having an effective movement against gun violence means “forefronting leadership that allows people of color to be at media events, at rallies, at protests,” and people need to make sure that, “the demands of the gun violence prevention movement are congruent with what is needed in these communities of color.”

Moving forward, Ellie Barnett-Cashman, a freshman who helped organize South’s walkout, hopes that there will be serious gun reform, including a ban on assault rifles.

“Legislators definitely need to get a lot more involved, because I think they’ve been trying to put on the good guy act…but then not make any changes,” said Barnett-Cashman.

“I think [the protest] is going to make a mark on how gun legislation carries out..We need to work on a level of addressing the mindset around guns, before we can start making policy actions,” said Phi.

The process of organizing the protest took two months, according to Hirsi. “It was really hard getting in contact with as many schools as we did..We got in touch with about 60 plus [schools]…across the state.” Hirsi explained that overall, they had a lot more attendees than expected.

Barnett-Cashman explained she attended the protest because “although I may feel safe in my school at South, there are so many people who everyday fear going to school, an fear what may happen when they enter the building….I’m here to fight for them and for everyone who has been affected by gun violence.”