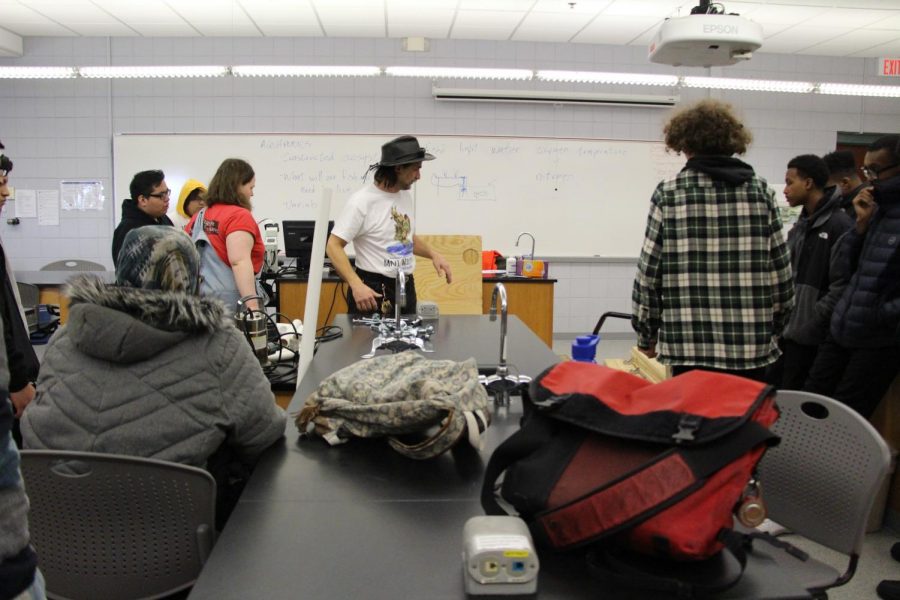 “The field trip was for a program called ‘Trout In The Classroom,’” said Mick Hamilton, who is raising Rainbow Trout in his Earth Science classes. The summit was organized into sessions, each having something to do with nature and ecology. As senior Esteban Gutama said, “[The field trip] is about learning more about the fish and how to take care of them.” Photo: Oliver Hall

DNR ‘Trout In The Classroom’ workshop get students fishing for more

On March, 9th Mick Hamilton’s Earth Science class went on a field trip to a student summit organized by the Department of Natural Resources (DNR), at the DNR’s offices.

The summit was organized into sessions, each having something to do with nature and ecology. As senior Esteban Gutama said, “[The field trip] is about learning more about the fish and how to take care of them.”

Tenth grader Stacia Schierber described some of the specific workshops: “The [workshops] that I remember specifically were fish identification and learning how to identify fish, how carp are an invasive species… learning about agricultural resources and agricultural fields, different careers in civil engineering and water pollution and aquifers.”

Hamilton explained why he believed these sessions were beneficial. “I think each session had some… information about different possible career paths that was given after a session that kind of showed…  why those careers are important and it also kind of ended up being almost like a mini career fair in each session which wasn’t something that I necessarily banked on but it was nice to have that in there also.”

Both Schierber and Gutama are interested in careers in science. For Schierber, the field trip was “very helpful… I think there’s a lack of knowledge about agricultural careers, it’s not seen as a very common choice for a lot of high school students,” she said. “I want to go into a career like this so it really helped me understand and get the basics of what it would entail.”

The return of this field trip for future years is in jeopardy. Field trips like this one are supported by a grant that has run out, according to Hamilton. “Currently this is the last year of this grant, so if this grant is still in place over the next few years it will be an annual field trip, but if the grant goes away then the student summit doesn’t exist so then it won’t happen again.”

However, there is a good chance that the summit will return in the future. Hamilton is confident that a new grant will be created to extend the field trip. “I know they’re working on one and they’re hoping for one. A lot of times when they have data that supports that the original grant funding was useful it helps them be able to get a new grant,” said Hamilton. “It’s just a matter of writing it and from what I’ve heard the data supports that this was money well spent so I would think that it’s a pretty good bet that the grant is happening.”