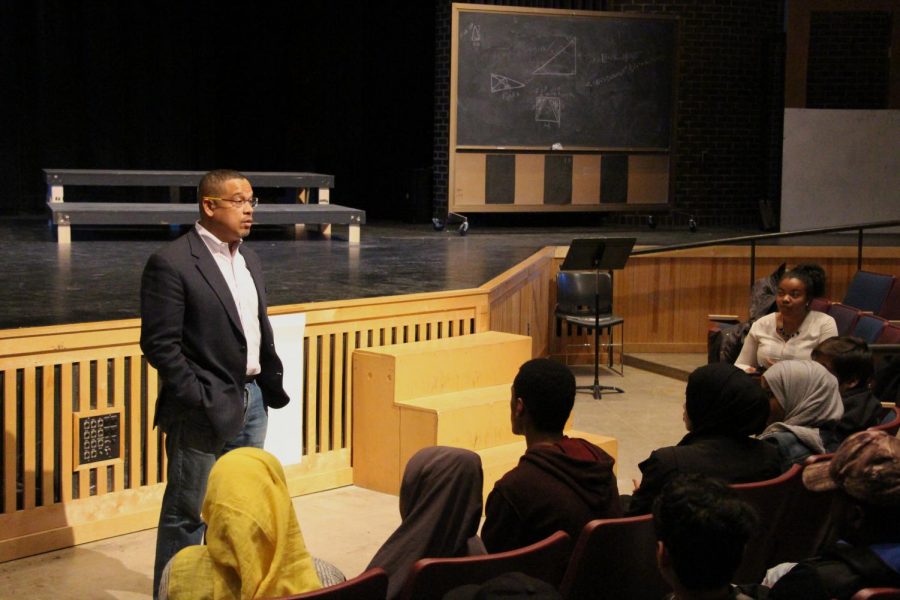 This morning, congressmember Keith Ellison came to South to speak with a group of 73 students about gun control, in light of the recent school shooting in Florida. Sophomore Anas Abukr said he thought the panel, “went really good. We touched on a lot of hard things, and there were a lot of ideas I heard. [Gun control] is a big problem in schools and there should be a lot of steps taken higher up to ensure students are safe.” Photo: Soline Van de Moortele

THURSDAY, MARCH 1ST, 10:35 AM — applause could be heard throughout South High’s auditorium as congressman Keith Ellison walked in to begin the panel. After shaking hands with Principle Ray Aponte, Ellison went to stand in front of the stage, before a group of about 73 students.

The panel was to be a conversation with the congressman to talk about gun control, gun laws, and the intersection between gun control and students. The panel came to be in light of the recent shooting at Parkland high school in Florida, where 17 students were shot dead. This happened February 14th.

Ellison began the panel by talking about the reasons behind coming to South to speak with students: “I thought it would be important to do, is to come and talk to you, and your ideas, about what needs to happen,” Ellison said to the group. He went on to talk about the influence the Parkland shooting survivors were having through their protesting and public speaking on the issue.

“When the Parkland shooting occurred, people your age, your age group, your fellow teenagers, sorta said, “we’re going to take this thing into our own hands,” he explained. “This is not the parents of the kids getting shots. This is the targets of the shooting incident, standing up and saying, ‘it doesn’t have to be this way.’”

The student group was composed of a class and a mixture of student activists. “Let’s get the students who organized the Racial Justice Day, any Dare 2 Be Real kids….these students in here were representatives of different groups, such as UNIDOS, or MSA,” explained Aponte, who organized the panel.

Junior Micaela Edwards, who is part of Dare 2 Be Real, attended the panel. “There shouldn’t be guns in schools,” she said. “I think there’s more pros to not having access to [guns] than cons.”

Ellison was clear in his stance on the issue, emphasizing the importance of background checks and higher age requirements, and said the idea of arming teachers, supported by the NRA, is “not a solution.”

“Having a gun in your home for home defense is one thing, having a military assault rifle is quite another thing,” he said. “There’s really no other industrialized country in the world that has the mass shootings that the United States has.”

“If the government is too paralyzed to operate, then people will do something. A lot of companies are not supporting the NRA anymore, and I’m glad about that,” said Ellison.

“The NRA has a lot of power. They’re the most powerful lobby in Washington. They give every member of congress a grade – A, B, C, D, E, F – and I’m proud to have an F,” said Ellison, with the audience cheering. “In school you want to get an A right, but it when it comes to the NRA, you want to get an F, that’s a good grade.”

During the panel, one student told Ellison that he’s worried extensive background checks would unfairly affect minorities, after Ellison explained he believed in having more thorough background checks for people who want to buy guns.

“There is a lot of disproportionality that happens in our society, but the value of making sure that people don’t have prior domestic violence convictions and stuff like that far outweighs the other considerations,” said Ellison, in response to the student. “Although the other considerations are important, we need to fix the criminal justice system.”

The panel went well, according to many. Sophomore Anas Abukr said he thought the panel, “went really good. We touched on a lot of hard things, and there were a lot of ideas I heard. [Gun control] is a big problem in schools, and there should be a lot of steps taken higher up, to ensure students are safe.”

In an interview, Ellison said he also thought the panel went well: “I think it went really well, the students asked excellent questions, and they shared their views in a way that really helped me get a better understanding of where young people are at.”

“Young people have always changed this country,” continued Ellison. “Young people defeated segregation in this country. People see John Lewis, and he’s like an old guy, seventy-something years old, but when he was doing this stuff he was 20.”