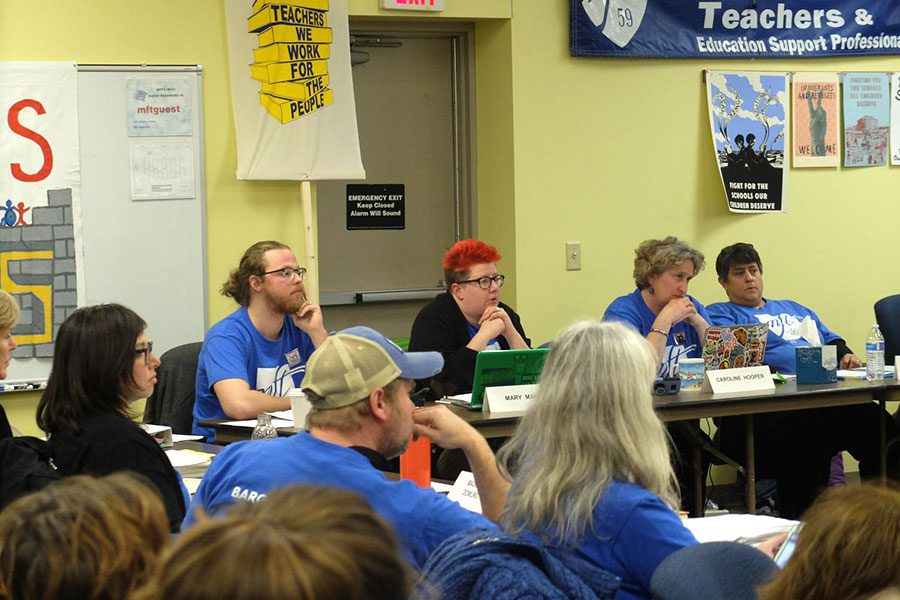 Since September, Minneapolis Public schools and the Minneapolis Federation of teachers have been nogiating a new cotract. This can include changes in class size or teacher salary. “What’s really important is our students learning conditions and those are our working conditions,” said South English teacher Mary Manor, who is a member of the MFT bargaining team.

NOVEMBER 21st, 5:30 PM — Teachers, community members, and staff crowded into the full room at the Minnesota Federation of Teachers (MFT) office near Saint Anthony Main. On one side of the long rectangle of tables sat the MPS district team members and on the other sat the 40 person MFT team. Bright blue shirts proudly labelled “MFT” could be seen throughout the room.

The MFT and Minneapolis Public Schools (MPS) met for their 5th public contract negotiation. Renegotiating contracts means resetting the “terms and conditions of employment” according to the MPS website.  This can mean anything from augmented teacher pay to number of kids in a classroom, and the changes can have huge effects on teachers and students. The MFT is also made up of many positions besides teachers such as librarians, nurses and social workers.

As people introduced themselves, a wide range of schools from every corner of Minneapolis were represented. Many staff present have children who currently go to an MPS school, and had themselves graduated from MPS. The length of time working in the district ranged from from over 40 years to fewer than 5.

The meaning of “terms and conditions of employment” was a source of division between MPS and the MFT. To many teachers, the term is defined broadly. “What’s really important is our students’ learning conditions, and those are our working conditions,” said South English teacher Mary Manor, who is a member of the MFT bargaining team.

In previous meetings the MFT has proposed reducing class sizes. MPS’s response described class sizes as “an educational and inherent managerial policy” and therefore “not subject to collective bargaining.” Chief Negotiator for MPS, Kevin Rupp, said, “we do not agree that the collective bargaining process is the way to address these issues.”

At this meeting, proposals from MFT were the main focus. These included items such as creating 3 pilot “full service community schools,” creating cleaner working conditions by hiring more engineers, and raising the minimum wage for all MPS workers to $15 by 2020. MPS currently does not have to follow Minneapolis’ newly approved $15 minimum wage, due to receiving money from the state and federal government.

“This is something that we desperately need to take a lead on,” said Andersen Community School teacher Kristen Melby, who presented this proposal.

“There are people who work in the district maybe as bus drivers, or in food service or secretaries, engineers who are getting paid less than $15 an hour,” said South photo and design teacher Corbin Doty, who is a steward for MFT, meaning that he is a representative of the union within the school.

“A lot of people who work in the school either as teachers all the way down to the lunch ladies are the parents or siblings or aunts or uncles of students,” said Manor. “If you’re concerned about students living in poverty, why would you pay poverty wages?”

MPS currently has a $33 million deficit which has caused tension when deciding what areas will be cut.

The teachers contract is renegotiated every two years, some years making small changes and other years, more dramatic ones. Some of the largest proposals brought up by MPS so far is a proposed pay cut of up to 5% to teachers’ salaries. “That is huge and I think we’d see teachers leave,” said Manor. Other major school districts such as Anoka-Hennepin have increased teacher salary. MPS also proposed reducing teacher planning days.

There have been possible areas of overlap between the interests of MPS and the MFD. The district is interested in eliminating two days off of the school year. This could save the district up to $1 million, according to a November 7th letter written by MPS Superintendent Ed Graff that is published on the MPS website. Teachers proposed creating an official holiday for Eid, a prominent Muslim holiday. The timing of Eid changes every year, but when it does land on a school day, school isn’t cancelled. Christmas, a Christian holiday always falls during winter break, and therefore never conflicts with school. “We need to be aware that we have a lot of folks that celebrate Eid,” said MFT President Michelle Wiese.

For many teachers, seeing each other lead the negotiations was inspiring: “It makes you feel really good as a teacher to know that you’re working with people that are that good at what they do,” said Doty.

It is unclear when the negotiation will be done as there is no official deadline. There are two more scheduled public meetings on December 5th and December 19th at the MFT headquarters. Then in January, they will move into meditation, which is a private meeting between members of the MFT and MPS and a 3rd-party mediator.

“It could be done in January, it might be February, it could go longer,” said Manor. Despite the challenging process, Manor is hopeful. “I’m excited because there are a lot of really important proposals that will make schools better for students and that’s really the purpose.”