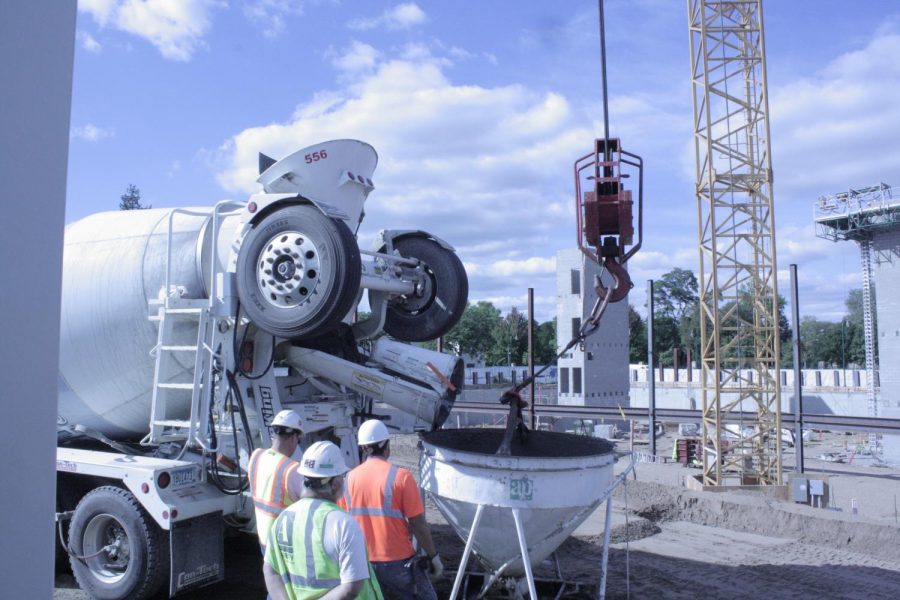 One program in the new building is Transition plus for students with disabilities get ready for life after high school. “It’s a good idea and I don’t know how many places like [Transition Plus] exist but i’m sure having more is better. I feel like disabilities are often overlooked,” said freshman Josh Baumgart.

“I’ve noticed the construction, because it blocks off the sidewalk,” said sophomore Luca Raffo-Simones, on the new building just a block north of South currently in construction.

The whole project started about July 2016. When planning and putting estimates together and then it went through some pre-construction which it putting a bid together for the project. Once Minneapolis Public Schools realized that the first draft was over their budget they had to redesign it to get it in their price range.

The start of construction began the first week in July 2017 and it should be completed by October 2018.

There were two problems they ran into. The lot that the building is going to be built on is going to have zero lot line. Which means “we have a little bit of space where our trailer is [on the south side] but as far as north, east and west the building is right up to the road” said David Jaeger the project manager for general contractor. Once construction began they realized there was contaminated soil. “It was ash soil which has to go to a special dump and that takes time,” said Jaeger.

Half of the building is used by Transition Plus, a program that “focuses on employment, living independently, and preparing for/accessing postsecondary education/training,” for disabled students after high school, as said by Shanna Sether over an email interview. The program started in 1990 by a special ed teacher in Minneapolis, David Evelo.

“It’s a good idea and I don’t know how many places like [Transition Plus] exist but i’m sure having more is better. I feel like disabilities are often overlooked,” said freshman Josh Baumgart. “It is for students who have gone from K through 12th grade but still have some disabilities that stop them from being independent as an adult,” said Ray Aponte. “Some of our students will end up going to school there. About 20-40 depending on the year.”

“This is really good for students after high school,” said Baumgart.

At the moment, Transition Plus is in the basement of Wilder School, which is an elementary school. They have always been put into different locations depending on which building in Minneapolis has space.

“The [new] location with easy access to transportation and county services will provide greater opportunities for our students to be successful,” said Jason Backes in an email interview. “The learning spaces are being designed specifically to meet the different areas our students need.”

The other half of the building will be occupied by Adult Basic Education. Many parents of South High students attend the Adult Education program and are taking classes to learn english and get their GED. It also offers citizenship classes and career courses. Adult Education is a very popular program, and all their classes day and night are filled up.

Near Lake street and 21st ave, there is a high crime rate. Aponte has been working with Minneapolis transit to make sure more police are out there to keep students safe. “By having another building and having staff member coming inand out, I think it’s going to create a safer environment,” said Aponte.

“It could be helpful for students with disabilities,” said Raffo-Simones. “I don’t think it will affect South students directly. It’s not even on our campus.”