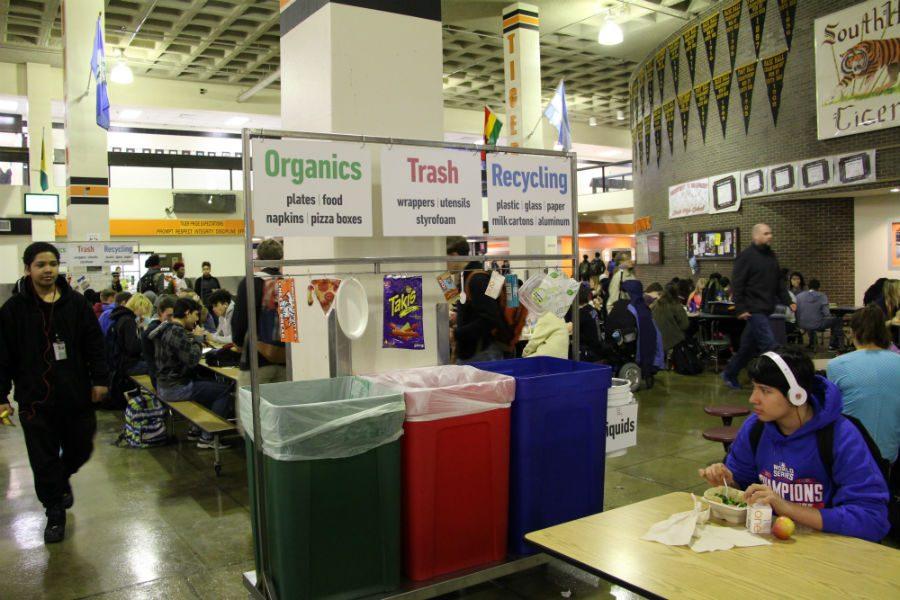 Pictured above are South’s new waste systems. Complete with bins for trash, recycling, compost, and liquids, the new structure makes it easier for students to understand where their garbage should go. Photo: Henry Holcomb

This Tuesday, South High students were greeted in their second hour classes by a video detailing an overhaul to the food waste collection system in the cafeteria.  The video informed students about important food waste facts. It included a segment about the amount of food wasted yearly were covered in the video, along with a tutorial for the new system.  It thoroughly explained the purpose of each part of the new collection system and how to properly use these new units. The new changes to the way food waste will be dealt with in the lunchroom.

The new system comes as the product of a grant by Hennepin County that was given to four Minneapolis Public Schools.  Their official website states that $25,000 have been allocated between South, Edison, Hmong International Academy, and Roosevelt. The site confirms that across 15 schools and school districts, a total of over $182,000 have been awarded to help improve waste reduction efforts and food waste programs.  For South specifically it states “South High School will add sorting stations to improve the organics collection and start collecting recycling in their cafeteria.”  The improvements were implemented February 7. The new waste disposal systems now stand around all corners of the commons.

The cafeteria is noticeably different.  The old standing alone and indistinguishable trash cans are gone, and replaced with instead a sleek and streamlined system.  The new food waste disposal system consists of four containers lined up on a row on a metal dolly.  Each bin is color coded and labeled with a list of the respective foods for each bin.  “I think it looks much cooler,” Said South senior Ayhan Aydin.  The new appearance of the stations is clearly very important and Aydin agrees that they are more aesthetically pleasing.

The new design is also appreciated by Sophomore Shane Stodolka, “Well it actually has signs telling you where everything goes so you actually know where to put stuff. Before it was just kinda like throw stuff wherever.” He continued, “I use school lunch every day and [before] I just kinda threw it in there because I didn’t really know where stuff went.”

Stodolka cites the school’s dysfunctionality with the previous waste system as the reason for the current changes, “My guess is to reduce the overall waste of South, because we waste a lot as a school and [it helps] the environment out.”  When asked if he thinks that the new system will be effective as opposed to the old units Stodolka is optimistic, “I think they are gonna use it correctly… I don’t see why not, it’s pretty easy and just kinda straightforward.”

The new system, which was implemented by South’s Green Tigers environmental club, provides students with a more effective and clear way to sort their waste. The neatly organized compost, recycling, garbage, and liquid bins give the lunchroom a waste-not want-not feel, and provide the South community with a greener future.