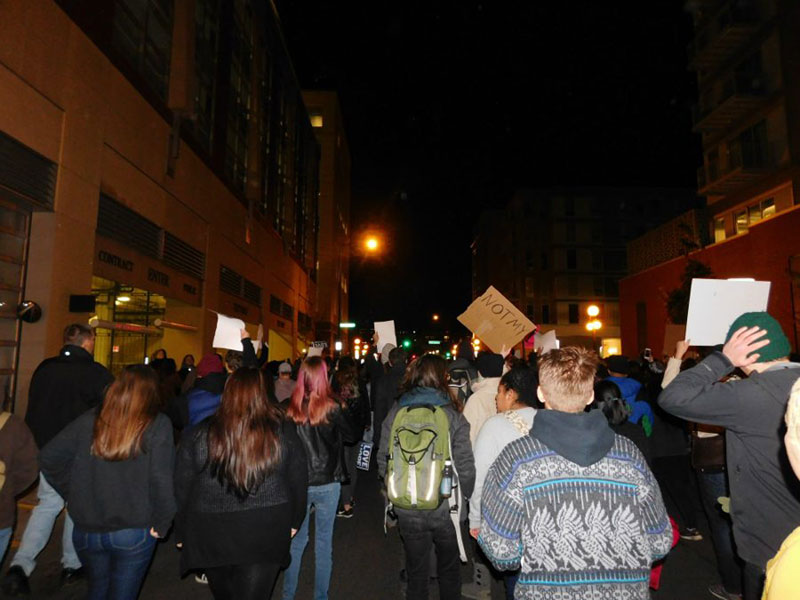 What started out as a couple dozen protesters grew to hundreds within a couple hours as people joined in with the marchers who marched from the Minnesota Capitol, to downtown St. Paul, up University Avenue and back again to the Capitol. Taking the streets, people protested last night’s presidential candidate winner, Donald Trump. Handmade signs with “Dump Trump Hate” and “Love Hope Rise” were held throughout the crowd.

Among the protesters were South students, like juniors Caroline Haarman and Mara Morgan: “I think it’s important that we are out here and that our body is doing something,” explained Morgan. Haarman and Morgan both agreed that because they were too young to vote, protesting was the political alternative. “We weren’t able to vote, so this was all we can do,” explained Haarman. Morgan echoed: “This is what we can do.”

Donald Trump’s campaign has infuriated many people because of his outspoken desire to ban muslims from entering the United States and his plan, if elected, to build a wall between the US and Mexican border in order to block entry of Mexican immigrants. More recently, controversial videotapes from 2005 were surfaced, with recordings of him boasting about sexual approaches onto women, saying you can “grab them by the pussy. You can do anything.”

South High School is notorious for its liberal values, and the election took a toll on many students, instigating conversations within classrooms: “Some of my teachers shut down discussions really quickly and that was really disheartening but other teachers would cry along with us,” said Morgan. “In a couple of my classes we talked about it,” explained Haarman. “But [in] other classes, teachers mostly tried to control discussions.”

At about 8 P.M., the sound of helicopters buzzed from above as the protesters moved towards the Capitol. Every hour or so, there was a group moment where a speaker would yell “Mic check!” to gather the protesters. One speaker quoted the renowned activist Assata Shakur: “It is our duty to fight for our freedom. It is our duty to win. We must love each other and support each other. We have nothing to lose but our chains.”

The protest concluded at about 10:30 P.M. back at the Capitol. Del Carmen thought the protest went well: “There’s a lot of anger but the way that we’re channeling it is very uplifting community-wise,” they said. “We’re really focusing on building each other up and supporting each other instead of being so angry.”