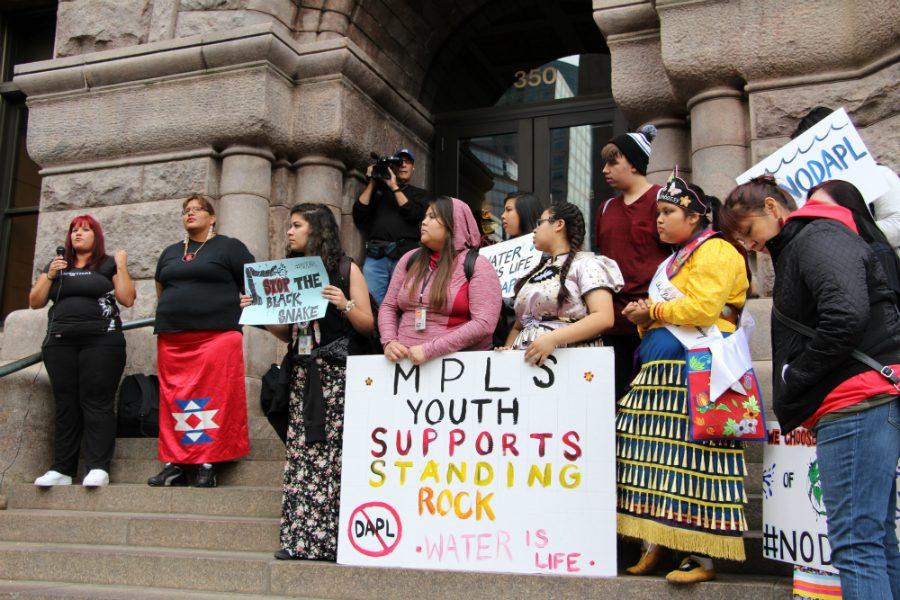 “We don’t have the school support right now, it’s just us students,” said eleventh grader Leticia Leon, speaking to the gathered crowd of South students outside of the school, holding up a “MPLS Youth supports Standing Rock” sign.

Leon, along with others in South’s Native American program, All Nations, helped organize and lead a walkout in solidarity with the NoDAPL – No Dakota Access Pipeline – protest in North Dakota. The students left the school at 1:30 P.M. between their fifth and sixth hour.

According to Leon a goal of the walkout was “letting the students at South know that this isn’t just gonna affect the Native kids here, and it’s not just hitting home for us. It’s gonna eventually make its way out because people are gonna think it’s okay that these pipelines go into rivers.”

The Dakota Access Pipeline is a project of the Energy Transfer Partners, and would cost $3.7 billion to implement. The underground pipeline would transport crude oil from the Bakken oil fields in North Dakota all the way to an oil tank near Patoka, Illinois.

The project became a massive controversy as local tribes including the Sioux and the Meskwaki claimed it was going to disrupt ancient burial grounds and pollute the Standing Rock reservation’s water. Protests began in April 2016, but the occupation of the Standing Rock Reservation began in the summer.

Freshman Andrew Fohren-Differenthorse, an All Nations student at South, explained he came to the protest “to support everybody and all of my people, all my ancestors, and everybody in…North Dakota  fighting [against] this pipeline.” He further explained, “We are just trying to be peaceful, to fight for our water, and fight for future generations.”

South students marched down Lake Street to the Midtown light rail station, chanting “Water is life!” along the way, with cars honking and supporters waving from their car windows. After reaching the Hennepin County Sheriff’s office downtown, the South students were joined by many other protesters and organizations including AIM (American Indian Movement), and MN 350.

The protest targeted the sheriff’s office because Hennepin County Sheriff Richard Stanek sent deputies and equipment to North Dakota.  According to City Pages, those deputies used batons against protesters as they assisted in the arrest of more than 100 on Thursday.

ing Representative Keith Ellison and City Councilwoman Alondra Cano. “All of us, including me, have to lift our voices, and we have to continue to push President Obama’s administration to halt the construction of the Dakota Access Pipeline,” said Ellison. Cano and State Representative Karen Clark also spoke.

Local leaders in the Native community and elders were the main speakers at the event. People of all ages from elderly to children as young as four attended the rally.  At about 3:45 P.M., after police asked protesters to move, the leaders of the event announced that a march would begin with the goal of ending at City Hall.

Elizabeth Santana, an All Nations 2016 graduate, went to the protest in North Dakota: “I was there last month. It’s really, really disrespectful to find out that the state of Minnesota allowed Hennepin County to go there, and terrorize my people like that.”

Freshman and All Nations student Sierra Cornelius said: “They are my people even though they aren’t here, I will stand up for them.” 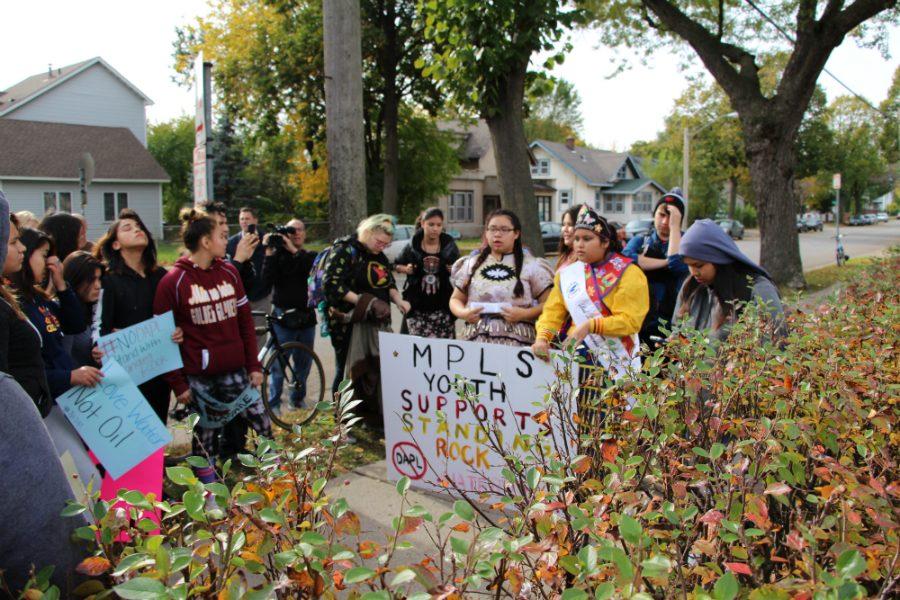