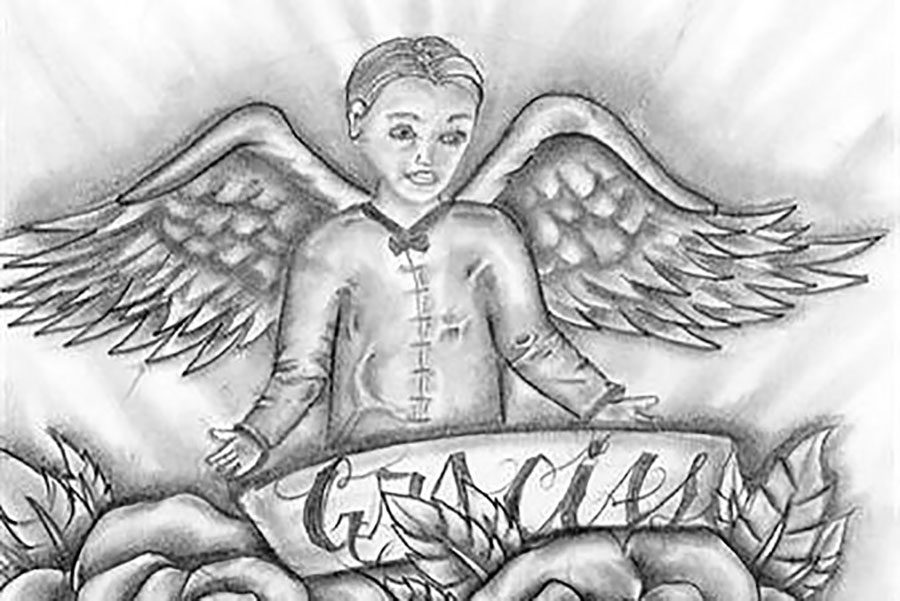 “Really bad things happen to really good people, he is caught in a system that is not serving him right now,” said Sheila Willette of the detainment of an assisting South student by ICE agents. This is one of two drawings sent to South’s AP Spanish V class in response to their letters of support. This drawing from Jacobs was sent for students of Willette’s Spanish V class accompanying the letter. Photo courtesy of Corbin Doty.

“As a student, he shouldn’t be treated as a criminal,” said Spanish teacher Sheila Willette, about the detainment of a South student by ICE (Immigration and Customs Enforcement). “Charles Jacobs,” (whose name has been altered due to privacy concerns), was detained shortly before school started this year. ELL Coordinator and teacher Elizabeth Carey spoke about how South discovered Jacobs’ absence: “We noticed that the student was not attending school this year and when we called home it came out that he had actually been detained by ICE,” she said. Jacobs’ bail was initially $12,000 until an immigration judge reduced it to $4,000 dollars following an appeal from Jacobs.

Carey decided to aid Jacobs’ family in getting their son out of detainment. “In the interest of getting [Jacobs] out, we knew we would have to raise money for his bail,” she said. Carey described the family’s efforts to get their son back: “The [student’s] family had to put up a huge amount of money… we had the fundraiser going and the family is going around asking… everyone they know for loans… [and] they put their rent money, all of their savings towards this,” she said. “We want him to be able to go to school, practice his English and be a part of a society.”

Now, Jacobs is officially out of the detention center; his bail was posted and he was released. The fundraiser remains open with donated money going towards his family so they can financially recover from what happened. Jacobs’ is now back at South attending school.

Willette had strong feelings. “My heart kinda broke, not knowing who this student is… I’m thinking this is a… student who doesn’t have a whole lot of support here, who can’t navigate the system linguistically,” she said. “The circumstances he found himself in when he was detained seemed completely unjust… I felt mostly sad.”

Willette decided to show support for the student. “For my AP classes… I offered the story… I kept it very broad and as I expected, my students were indignant upon hearing the details, [they] were ticked that this could have happened… both classes felt this was unjust and unfair,” she said.  Students in Willette’s class AP classes were given the opportunity to write letters to the student.

“Even though every student in this class was writing to an anonymous person, they knew it was somebody their age and they could relate to and they could also that it would be terrifying to be picked up off the street and thrown into a jail that was 45 minutes away from your house with no access to the people that love and care for you,” Willette said. “We just simply wrote cards of support to him. They were very general and maybe not in perfect Spanish, but they were in his language, and I knew they would be impactful,” she said. “No matter where they were that day in their minds or hearts they were on board with trying to support a fellow student.”

Upon receiving the letters from the AP Spanish students, Jacobs wrote and sent back a letter to both classes. “He sent this beautiful letter that was so positive and so uplifting and cheerful,” Willette said. “He was so affected by the cards, it seemed very much like a letter of solidarity, [and that] he felt support from the classes that had written to him.”

“So his letter was deeply grateful and deeply hoped that he would be back at school,” said Willette.

Although Minneapolis has self-declared itself as a “sanctuary city” along with the Minneapolis Public School district, Jacobs was still picked up by ICE.

“Officially Minneapolis is a sanctuary city but that’s not a legal status, there’s no legal definition of a sanctuary city.  So we supposedly have this thing where we protect immigrants and keep them out of the hands of ICE but we don’t have clear steps in existence to make sure that happens,” Carey said.

Because Minneapolis is a “sanctuary city,” Minneapolis police are not supposed to aid ICE agents, but that does not keep ICE agents from operating within the city. “A big thing is the Hennepin County Sheriff collaborates with ICE. So anyone who gets picked up… by Minneapolis police [can] get transferred to Hennepin County for processing and are automatically flagged,” said Carey. “The [police] essentially call ICE… so when people get released, ICE is often waiting out in the hallway for them. Even if you are not charged, even if you didn’t do it.”

Although ICE may act and appear like police officers, they are not. “ICE will often wear things that say police on them… so that people see that and think, ‘Oh these are the cops,’ [but] they’re not,” Carey said. “They’re supposed to have a warrant for your detention…[which] says your name, address, all of this identifying information and then they’re supposed to have that signed by an immigration judge.”

“What I tell people is… don’t talk to them even if they have a warrant, never answer the question ‘what country are you from?’” Carey said.

Carey also spoke of school’s role in immigration policy: “Immigration agents are not supposed to come into school or hospitals or churches,” she said. At South, administration has made it clear that the school is a safe place for undocumented immigrants. Even if ICE has a warrant, administration will physically resist against their presence in school.

Carey hopes that vulnerable students feel supported in school. “I hope that we’re conveying to the staff here that we will do anything we can to provide a safe space,” she said. “I’m never going to ask a student their immigration status but if they feel the need to talk about it, they’re welcome to. I’m a safe person to talk to and I hope that students understand that there are people in the building that they can speak to.”