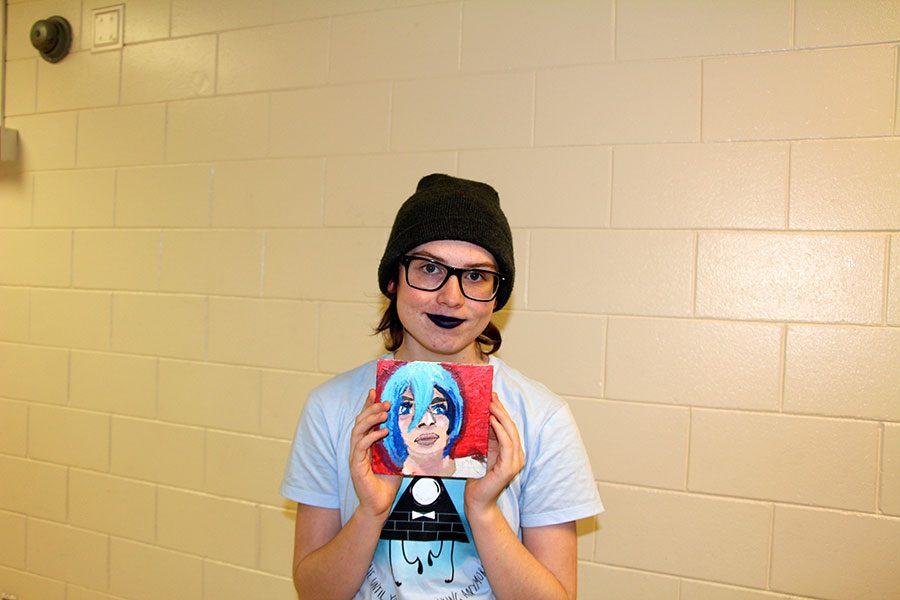 “A name that very much does not belong to me”

You can’t choose the name you were given at birth.  Many people don’t realize how hard it can be to not identify with a name you were assigned. On the first day of school, or when there is a substitute teacher, students who do not to go by their legal or birth name are forced to hear and respond to their dead name – or legal name – used over and over again.

“[A dead name] is the name you were given at birth and or it’s the name you grew up people calling you, that is associated with a certain gender that you no longer identify with,” explained sophomore Cor Barnhill.

“Freshman year I had this teacher, and I was a little late turning in a computer,” said junior Finn Niesewand. “She basically used my dead name and my middle name, which I also don’t use since it’s a more feminine name, in front of everyone.”

Some teachers understand that this is an issue: “When I am not calling someone by their actual name I want to make sure I am using something that they are comfortable with, that identifies them,” said English teacher Mary Manor.

Calling an individual by their dead name can be very emotionally harmful and offensive to them. “It feels like people are taking my personal identity and disrespecting it… and showing that they don’t care,” said sophomore Levi Rolfzen. “It picks off something of me every time.” Rolfzen also explained that someone’s dead name says a lot about who they were, but it says almost nothing about who they are and who they want to be.

“It’s the feeling I get when I see we have a substitute or on the first day of school knowing that I have to go to each of my teachers and go say ‘Hello, yes, you know the name on your attendance sheet. That is incorrect,’” said Niesewand. “People talk about coming out like it’s one thing that you do once, then you’re done. But it’s not, because every time I have that conversation it’s me coming out as trans again.”

“The person calling me [by my dead name] is associating me with the girl I used to be, who I’m not anymore. They are talking to a person who is dead now,” said Barnhill. It makes them feel like they are not being seen how they want to be seen.  “It’s basically taking something I made and destroying it,” said Rolfzen.

This is similar to when people don’t use the pronouns people identify with, such as she/her and they/them, versus the gender pronouns they were assigned at birth. Niewsewand had a teacher who continuously used the wrong pronouns. “Every time she would act like it was the first time she heard that I didn’t use her/she pronouns,” they said.

There are people believe that using the right pronouns and name should just be something you do, though. “I hope that students know that teachers want to just call them by their correct names,” said Manor. “If it does have an impact it’s because we are not paying attention to the things we should be paying attention to.”

A lot of teachers at South have realized that there will be students in their class that do not go by the name they were given at birth. “Ms. Manor wasn’t reading off the attendance like most teachers do. She had us write down our names on this piece of paper and our pronouns,” said sophomore Levi Rolfzen. “It was good because she acknowledged the fact that there was going to be trans students and queer [students] in her class that are not going to go by their dead name.”

“With Cor, I was trying to get something easy for people to switch to,” said Barnhill. “I want a more masculine name instead of neutral.”

“It took a long time to decide on the name because I wanted to make sure it was a name I wanted,” said Rolfzen. “Now I am in the process of legally changing my name.”

“It’s hard because I need both my parents to sign the papers and at the moment my mom lives in Peru,” Rolfzen said. After the papers are signed, he’ll still need to pay a legal fee of $314. Once that is done Rolfzen has to bring those papers into school and they will change the name on the attendance.

If you do slip up and use someone’s dead name or wrong pronoun, Niesewand suggests you apologize and move on. “It acknowledges you made a mistake, it corrects the mistake, but it doesn’t call out that much attention to it,” said Niesewand. “The only thing worse than someone acting like they didn’t do anything wrong is someone making you feel like you have to comfort them for messing up.”

“People don’t talk about that…being a teenager is a process,” said  Niesewand. “Everything about being a trans-teenager is even more because you are discovering yourself twice as much as everyone else is.”