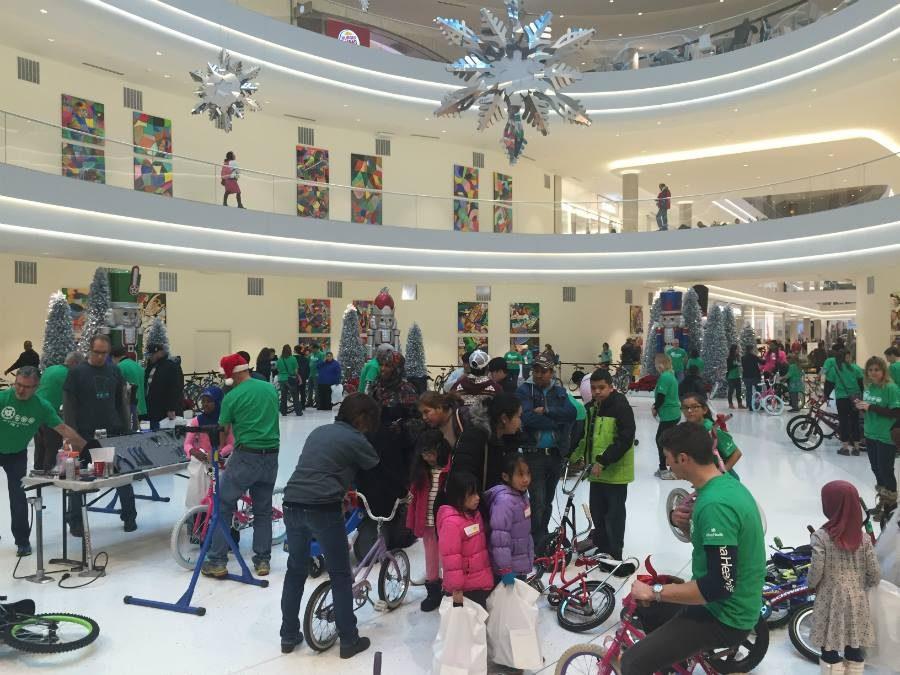 3:15 P.M. December 4th Mall of America — Amid the rush of holiday shopping, tucked away in a corner of the mall, free bikes were given away to 32 lucky EL (English Learner) students from South. A giant oval of bikes was set up, all of different sizes and colors from a bright pink child’s bike to an adult sized black one. Each was neatly decorated with a red bow. The organization, “Free Bikes 4 Kidz,” was giving away bikes all weekend to different organizations, and finally it was South’s turn. Freshman Hamze Ahmed proudly walked out with his new bike. He is thankful to get it, and plans to use it next summer: “I’m so excited,” he said. Junior Yaneli Becerra is also very excited about getting her new bike. With the help of a translator she explained she’s looking forward to “going out and riding the bike around the lake.”

The EL program at South designed to help teach students English both within and out of their core content classes. According to South’s website, the program: “incorporates an ongoing and intensive focus in English language development to support the advancement of reading, writing, speaking and listening.”

Heather Hinrichsen, a Spanish Bilingual Associate educator at South, applied for the bikes. “[Biking] is so important to me, it’s been my transportation for a long time,” explained Hinrichsen. “I want to share that with my students because Minneapolis is such a great city to be biking in and it’s so easy to get around.”

Unsurprisingly, Free Bikes 4 Kidz is also passionate about kids having access to bikes. “Free Bikes 4 Kidz wants to help children ride into a happier, healthier childhood by providing a bike,” said volunteer coordinator Tia Martinsom. “It’s for kids who don’t have an opportunity to get a bike on their own, we’re gonna get them a bike.” Free Bikes 4 Kidz, which donates about 5000 bikes a year, operates by collected used bike and revitalizing them with the help of volunteer mechanics. Russ Engstrom, one of of those mechanics explained, “It’s a way to see these bikes that are really not being used or even thrown out [and] it kind of hurts you to see that [and] you say ‘Somebody else could use this.'”

Hinrichsen had been in part inspired to do this by Pillsbury Elementary school, which has an after school English Learners bike club. “They take [the EL students] out and have real world experiences, have to speak English to people, have to learn the rules of the road, and it gives them confidence and it makes them feel more comfortable in their community,” said Hendtichsen. “There are just so many positive things about that for specifically EL kids.”

However, this is not the end of the EL program’s plans for student involvement with bikes. Hinrichsen, who has helped with other biking field trips around South — such as the bike trip to Minnehaha Falls for Bike to School day in 2015 — has plans to create to create a biking club at South for EL students. This will make it so that all EL students, not just the 32 given them this weekend, can have access to bikes. “I’ve had so many other students come up to be like “I want a bike too!” said Hinrichsen. “The thing about EL is that they are constantly shifting and moving and we are getting new students in all the time so now there are kids in that class that are not going to get one. That’s why I’m hoping to get a fleet of bikes eventually.”

Engstrom explains the importance of a bike to a child simply; “As kid…when you get a bicycle your world gets bigger. You see the world in a different light.”