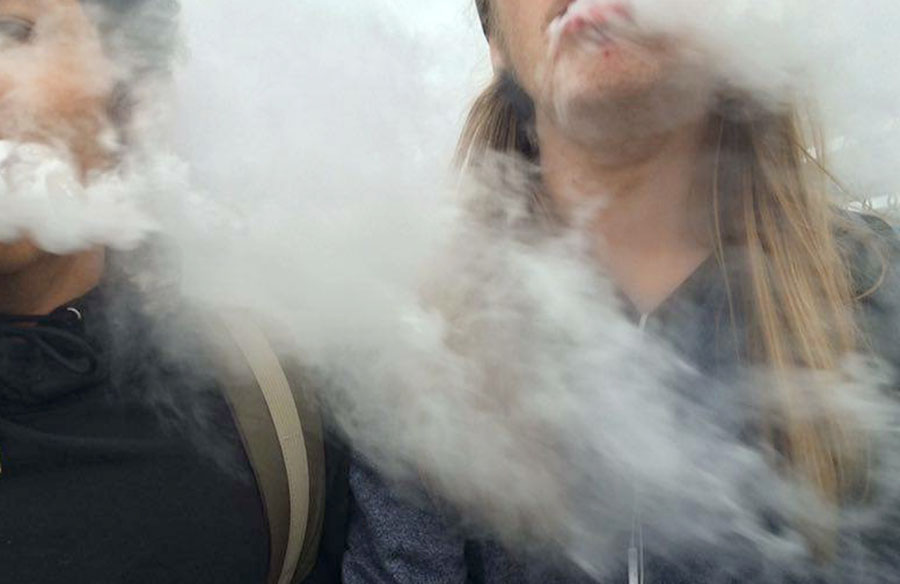 Vaping has become popularized in the South community, especially because of it’s availability to minors.

Vaping has become popularized in the South community, especially because of it’s availability to minors.

The use of electronic cigarettes, also known as ‘vaping’, has been rapidly popularized throughout the nation, Twin Cities and even at South. Although the usage has become more common, there is a lack of research and studies done on the long term effects of regular e-cig usage. Many students say the lack of information proving e-cigs are dangerous has made them more comfortable and feel safer using it regularly. With the growing amount of teenage e-cig users, there is also a decrease in teen tobacco users.

According to the U.S. Department of Health and Human resources the percentage of high schooler e-cig users soared from 4.5% to 13.4% from 2013 to 2014. Parallel to this increase, there has been a significant decrease in cigarette use in high schoolers.

“About 9 of every 100 high school students (9.2%) reported in 2014 that they smoked cigarettes in the past 30 days—a decrease from 15.8% in 2011,” stated the National Center for Chronic Disease Prevention and Health Promotion.

Many e-cig users believe the increase of electronic cigarettes usage among teens is beneficial because it reduces usage of cigarettes; others say vaping is still unhealthy and the popularization of it is problematic.

“[Vaping] is worse because it’s just as addicting as cigarettes and you can do it anywhere,” said junior Rob (whose name along with all other underage e-cig users in this article has been changed to protect their privacy). Vaping is easy to get away with because of it’s quickly-disappearing odorless smoke, making students less likely to get caught.

Teachers and students have recalled peers vaping in class and in hallways. Rarely have students been caught. “There have been two students busted for vaping,” said Anne Gorton, who has been working as a Chemical Health counselor at South for six years now. Being caught usually leads to a one day suspension. She says there has been an increase of e-cig usage at South in the past two to three years.

Accessibility is something a lot of users say makes it so desirable. “I would say I’m addicted to vaping because it’s so easy,” said John, “and you can do it anywhere, at any time, it’s just very convenient to do.” It’s also easy to purchase juices and accessories for e-cigs, even for minors.

“You can go into most vape stores and they don’t card you or you order it online,” said tenth grader James. Other students said they would sometimes have an adult buy it for them or order online. Because e-cigarettes aren’t established as tobacco products, they aren’t regulated by the FDA, limiting the pressure on stores illegally selling to minors.

There’s a significant lack of research on the long-term effects of e-cig usage. There hasn’t been enough evidence produced to record the long term effects of e-cigs because they only gained mainstream popularity around the 2000’s. E-cigs have been popularized among teens since the early 2010’s.

E-cig juices are often infiltrated with harmful chemicals on account of not being regulated by the FDA (Food and Drug Administration). “There’s a whole lot more to learn about liquid nicotine,” says Gorton, “there’s nothing organic about vaping.”

Many vapers admit there isn’t enough information on the chemicals used in e-cigs. “Recently I’ve been doing a little bit of research and there’s not any real concrete information, so I don’t feel one hundred percent comfortable using it,” said senior John. “They don’t know what health risks there are yet,” he continued.

That said, many users believe there are limited health risks to vaping, especially compared to cigarettes. A study by the PHE (Public Health of England) found that e-cigs are around 95% less harmful than cigarettes. E-cigs use water vapor and e-cig ‘juice’ which generally consists of water, propylene glycol, nicotine and flavoring. In cigarettes, the rolling papers are the main consistency of the smoke and are what burn the lungs most. “It’s way healthier than cigarettes,” junior Will says,“I think vapes are good because it’ll stop people from smoking squares.”

The use of e-cigarettes has become more of a trend in the past few years. E-cigs are now more commonly marketed to teens. “Especially with all the flavors it’s a bunch of things that kids like,” says senior Jane,“It’s definitely marketed for a younger crowd”. Flavoring in e-cig juice comes in hundreds of different flavors. A few of the favorites from the interviewed users are ‘raggleberry’, ‘dragonheart’, ‘pony on acid’ and ‘chocolate mint’.

Vaping has become a culture of it’s own with stereotypes, communities and language. One student explained that over the summer as he started vaping everyone in his friend group did too, and that the use of vapes spread among interactions. Townes Nelson explained that ‘vape boy’ is a common term used to stereotype student e-cig users.

Nelson expressed his perception of the stereotype of a vaper: “Your vape gods…I’m talking you’ve got a vine account you blow o’s (a smoke trick)….South kids are often stereotyped as vapers too“.

One student explained certain slangs used such as ‘cloud chasing’, ‘hey bro you got your e?’ and ‘dripping’. Many of the users said they had ‘smoke sessions’ or ‘hotboxing’ where a couple of friends gather in a closed room and everyone vapes so that the smoke fills the room. “Once it gets too hazy in there I roll down my window they roll down theirs and [the vapor] is just pouring out like water out of a glass,” said Will.

Will explained what he likes the most about vaping. “So, when I vape, I go to someplace where I know it’s quiet at most times…I vape, let some clouds chase, listen to some sleeping with sirens…just chill out and all the bullshit in the world, all the things you thought about today just goes blank…you’re just sitting there looking at this beautiful sight and you’re just thinking about that and not anything else.”

There are still many controversies surrounding vaping and vape culture. With the increase in vape use within teens, the need for concrete research and studies increases as well.  Nevertheless, vaping has developed as a recognized aspect of day to day life at South.