Trump’s acquittal: what wasn’t looked at in the impeachment process 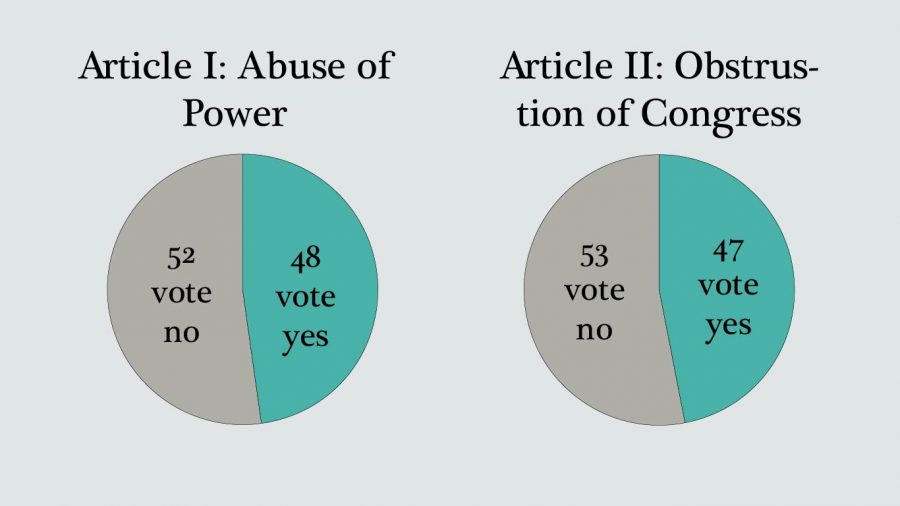 “I think it is important to understand that justice was not served, the law was broken, and it was bended for a powerful individual,” said senior Tiger Worku

The long awaited results are out. To many, it is no surprise that President Trump has been acquitted on two articles of impeachment, despite what the House’s charges were. If you didn’t know already, Trump was tried upon abuse of power and obstruction of congress, congress failed to convict him on both and therefore Trump still remains in office. Comparing the impeachment inquiry to a “Witch Hunt” and “Hoax”, Trump celebrates his acquittal but he is still one of the 3 presidents to have impeachment on his record.

“Acquitted or exonerated just means he wasn’t removed from office, and I think he was protected by his party. Even people that said they voted to acquit him said he was guilty of stuff, so it’s really a weird time because you couldn’t in any other situation have a juror say ‘well he’s guilty but shouldn’t be punished’ and so it’s kind of bizarre,” said government teacher Scott Wentworth defining exactly what acquittal means.

Others think there were important events and testimonies that led to really impacting a lot of people individually regardless of the trial outcome.

“In the actual trial, weirdly enough there weren’t any important events. There weren’t any witnesses so everybody went out and said what they thought [before the trial], so we had already heard everything before and it just kind of happened. I thought it was the weirdest thing ever because when Clinton got impeached I listened to every word of that and this time I didn’t really pay that much attention even while teaching government, so that was really bizarre. I think that we all knew what was going to happen, it was like watching a play almost that you know the ending, it didn’t feel like anything was going to happen that was of consequence, we knew what everybody was going to say [and how] everybody was going to vote,” said Wentworth.

“I’m not surprised, I knew it was going to die in the Senate, Republicans control the Senate so I guess I was holding out because I thought there was some hope, I thought that republicans would choose their country over their party and clearly they didn’t. I think it just sets a dangerous precedent going into the future, no one is above the law but this result does not accurately reflect that statement,” stated senior Tiger Worku.

Seen by many, Trump is a felon who abused his power as president resulting in the Trump-Ukraine scandal, and because of this he was impeached. Although he was proven to have taken advantage of his authority during that scandal, what is often overlooked in the misconduct of Trump and his administration are the detention facilities on the southern border of the United States. These can be described by some as essentially “prison camps” targeting and dehumanizing Latinos, some detained by the government by crossing the border illegally, some with expired visas but all mistreated to the extent of abuse.

According to research done by the New York Times in some cases, cells designed for 35 people are holding 155 people. holding all ages from infants to adults, the conditions of these camps are considered to many a high crime or a misdemeanor but are fully and blatantly enforced by Trump and his administration, yet that was often not discussed when it comes to the impeachment of our president.

It can be hard for students and others to keep up with politics. For some, the news can be uninteresting and for others it can seem unsettling to hear about things that seem too far away to prevent. “I haven’t followed [the impeachment] because I’m not really interested in the news, I haven’t watched any of it on TV either, probably because it’s Donald Trump like I could care less about him. If an article comes up I’ll read it but I won’t go into it on my own time,” said sophomore Pablo Panora.

Other students think politics of today are refreshing and enjoy keeping up to date with everything. “Through social media, through articles through various sources, you know really if you want to keep up with politics. It isn’t hard to get information, we are in the age of information. What’s important is you have to be passionate and you have to understand what information you’re getting, you have to be able to mitigate what’s true and what’s wrong. I say get involved, obviously politics doesn’t naturally come for some folks it’s boring but if you revolve your politics around certain issues you care about… than I think you will start to slowly become more and more invested because you will see that you know, you care about this issue, you came into politics focused on this issue and now all of the sudden you learn more about what you care about,” said Worku on ways to follow the news.

Trump continuing to be president may not affect many students at South directly, but his impeachment and acquittal will go down in history for the fact that many people predicted the outcome of his trial, meaning the norms of our country as we know it are reshaping.