While it may not be scientific, astrology still helps students navigate life 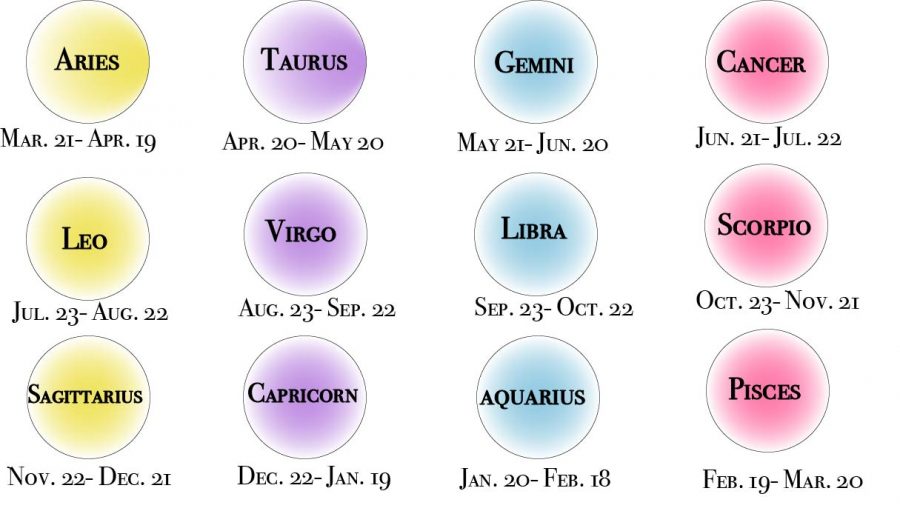 There are 12 Zodiac signs and each sign has specific traits to them. By looking at your birth month and date, you are able to figure out what your sign is and furthermore explore what things your sign says about you. “Since the Earth has wobbled and changed in the last 2,000 years, whatever your sign is isn't your sign today,” said astronomy teacher Kate Rosok.

From Instagram pages to people posting on their Snapchat story, to newspapers, websites, and even apps available for people to download on their phones, astrology has been around for a long time. Now it’s becoming an obsession. For example, The DailyHoroscope is popular and one of the best apps for checking horoscopes daily, weekly, monthly, or for the whole year.

Senior Sandra Leal-Munoz is just one among the many people that loves astrology. “I think it’s a lot more fun to believe in then to question it,” said Leal-Munoz.

As humans, we have been studying and looking at astrology for thousands of years. It’s normal to check what your horoscope has to say about you, whether it’s once a month, twice a week, or even daily. “We want to know the future. Most of astrology has good advice so why not listen to those things,” said astronomy teacher Kate Rosok.

Oftentimes while checking your horoscope, you might check the sign of your best friend, siblings, or even your crush. “It’s funny because I feel like people get annoyed by it but it’s kind of true sometimes because people really do match up with their signs,” said Leal-Munoz.

“I like reading about astrology and horoscopes. I think it has lessons for us on how to be good human beings…but at the same time it’s not considered science because it cannot truly predict the future,” said Rosok.

“Scorpios are supposed to be really loyal, which I think is true when it comes to friendships and people I know. When I really like you, I’m there for you…” said Leal-Munoz. She continued, “They are supposed to be mysterious but I don’t know if that’s accurate for me…”

“I find it interesting because I just wanna stay updated…I check it when I feel like I need an answer in my life like oh my god this is exactly what I needed to hear right now,” said Leal-Munoz. She continued, “I think people are interested in it because it gives them validation…you wanna hear about that you have specific traits, especially positive ones,”

While some love the idea of astrology, others not so much. “It doesn’t really make sense to me…that shouldn’t define how you are because it’s not true,” said Junior Kai Alquicira.

“I think it’s really interesting that some people choose to really believe in it and find it interesting and other people really want to stay away from it and they’re like ‘No, it’s not real because there’s no real science behind it…’” said Leal-Munoz.

Alquicira is a Cancer and doesn’t check his horoscope at all. But when asked if what his sign says about him is true or not, he believes it is not true. “It says I’m patient but I’m not really patient or I’m an extrovert but I’m like the opposite…” said Alquicira.

He believes they are not accurate for him but can be accurate for some people. “I don’t feel like there’s enough evidence to support that kind of stuff, obviously there’s research but I don’t believe in that stuff,” said Alquicira. He continued, “I feel like it’s a basic white girl thing, and [it’s just them] posting it on their stories saying something like ‘oh yeah I’m this and that defines me.’”

According to Rosok, the dates used in astrology gets complicated because they were true 2,000 years ago. “In those years the Earth spun on its axis [in a certain way] and the axis wobbles like a top which means that my sign [if you look at the newspaper] says Cancer…but if you look at when the constellation of Cancer is, where the sun actually is, on my birthday, it’s not actually in Cancer,” said Rosok. She continued, “Since the Earth has wobbled and changed in the last 2,000 years, whatever your sign is isn’t your sign today,”

I do believe in astrology and personally check what my horoscope has to say about me. As a Virgo I think it does match me and who I am as a person. For some of the things being said about a Virgo, I’d have to disagree with. Virgos are considered as modest, perfectionists, over thinkers, loyal, and down to Earth. All of which I think describes me well but I do like trying new things and going out of my comfort zone.