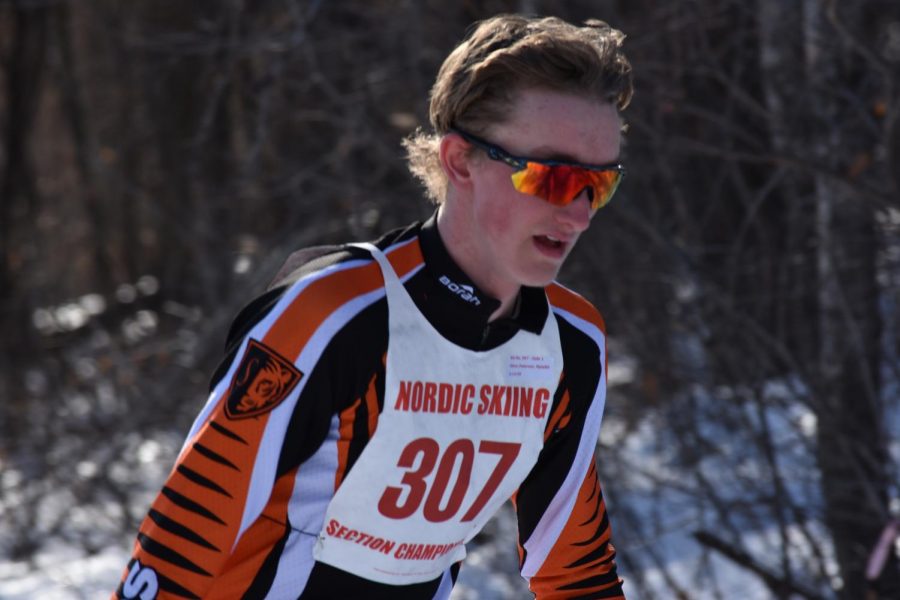 “It was a really fast day, it was super icy which for me was really good cause I can kind of maintain my momentum over hills… it was definitely a day that suited me,” said senior, Ethan Peterson. South Nordic Skiing brought their all to sections this year and had six members qualify for state individually.

This year has been very successful for South’s Nordic Ski team. They placed third at sections in both girls and boys as a team and there were five members  who qualified for state individually. These hardworking students are sophomores Ella Hoch-Robinson and Erika Peterson, seniors Ethan Peterson and Henry Neufeld and freshman Cody West.

South’s Nordic Ski team holds practice everyday after school and occasionally on Saturday mornings. They make the trek–in the form of a 20 minute bus ride to Wirth park in Plymouth for every practice.

Peterson had a great experience at sections and had worked hard in order to qualify for state. “It was a really fast day, it was super icy which for me was really good cause I can kind of maintain my momentum over hills… it was definitely a day that suited me. I felt really good and I made sure I wasn’t sick leading up to it for like a week. I also ate well and prepared well for it so I was happy I made it.”

The day of sections was similar for West, and he had worked hard all season to reach this point. “It was a cold day, we all raced well, we kind of carried each other to the finish line,” said West. He raced at the end with Peterson and Neufeld, and felt that the combination of their hard work helped them all make it to the finish.

Noridc is an individual sport, but working cooperatively can be extremely beneficial. Peterson said that “It really helps training with people who are at your speed because we can motivate and push each other to do better.”

Hoch-Robinson described the grueling effort that’s required to qualify for state as a team. “It’s a lot, you have to have a really strong team all the way through the seven places and it’s very competitive in some sections but our section isn’t as hard, which is lucky. There is a lot of equipment you need and it’s very expensive so there’s a lot of money and time invested into it.”

The price aspect of Nordic makes it less accessible, but the team still has a sufficient amount of members. “It’s expensive so it’s kind of hard to surpass barriers like that but I think there’s definitely more people who are starting to join and realize how fun it is,” added Peterson.

Having such expensive equipment makes it even harder for South to succeed in the Nordic world. “South as a team is definitely not as privileged equipment wise as some of the other schools, [other schools] have a lot of good skis and poles and they get coach buses and all that to all their races. We’re kind of more of a lowkey team, we are maybe a little bit more social but I’d say we are definitely getting [better],” said Peterson.

To Hoch-Robinson Nordic means “having fun and it’s a good opportunity to spend time with your friends and you get to go experience a lot of things I wouldn’t ever do otherwise.”

Nordic State was on February 13th and although none of the qualifiers placed, they all worked hard and were happy to have had the opportunity.