Sports rivalries: How do they affect team morale? 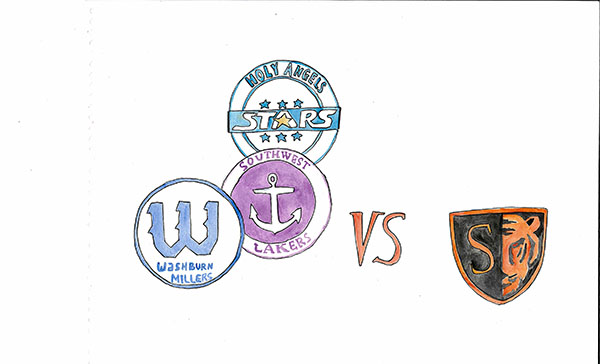 South’s main rival is Southwest and occasionally Washburn, but when it comes to hockey, the Holy Angels lead the pack as their main enemy. According to hockey player Maddy Helmstetter, rivalries are an important motivator. “I think a lot of our girls build off of [the rivalries] and it makes them want to do better,” said Helmstetter.

Rivalries are an integral part of numerous South sports, but what part do they play in team morale? The dynamics of rivalries definitely vary a lot between different sports, and play a different part in the team’s motivation. So what do different sports have in common, and what do they differ on?

South’s rivalries have changed a bit over time but by far, our main rival is Southwest. With the exception of a few sports including hockey and ultimate frisbee, Southwest is our closest opponent. This is because we have the most similarly matched team and player levels.

Having rivalries with other schools can have many benefits when it comes to boosting team morale, and can drive people to do better. “When we go out there on Super Soccer Saturday to go play Southwest, everybody is super hyped for it… [that game] for sure increases people’s dedication to soccer,” said varsity soccer player and junior, Chloe Olson. She added that rivalries, especially in soccer, play a big role in driving people to really do their best. “It’s almost like a sibling-type rivalry, you’re just trying to be better than them,” said Olson.

The varsity soccer team’s code for good sportsmanship also helps with keeping rivalries in check, and keeping communication between teams respectful. “A big part of our policy is about being respectful to the teams we play…our coach Lizzie Merril really keeps us in check,” explained Olson.

Rivalries can also be a complicated issue. When it comes to the gymnastics team, they sort of have to play both sides. The South gymnastics team practices alongside the Roosevelt team and the rest of the Minneapolis teams, but competes individually, which is how it’s been for a long time. “In the past we’ve been one big team and that’s what we’re fighting for for the next couple years,” said team captain Sasha Gitler.

She added that sometimes rivalries can be bad if you get too serious about the competition. “If you’re only in the sport and getting better just to beat this one team, I think you kind of lose the joy in the sport, ” said Gitler.

The gymnastics team’s main rival is Southwest which goes along with Washburn because they share the same coach. Training so close to their rivals also helps them stay motivated, because they are constantly watching the other team progress with their skills.

When it comes to hockey, Minneapolis Public Schools only has one district team, because there aren’t enough players for each school to have their own teams. Therefore, a big rival of theirs is Holy Angels in Richfield. They have also built a rivalry with another suburban team. “We also built a rivalry with Chisago Lakes last year during sections, when we beat them to go to the section final game,” said varsity player and freshman, Maddy Helmstetter.

The hockey team’s rivalries tend to come from a friendlier place as well. “Rivalries come when you have friends on the other team… a big motivation is having bragging rights over them,” said Helmstetter. She elaborated that a part of having good sportsmanship is being able to be enemies on the ice, and friends off of the ice. When it comes to competition, rivalries are certainly a two-sided issue but it’s really all about having fun with the sport and trying your best.

Rivalries have many pros and cons, no matter the sport. While sometimes they can add to the stress of competition, rivalries can also be a strong motivator for many players and add another element of fun to the game.