The world of freestyle skiing and snowboarding at South 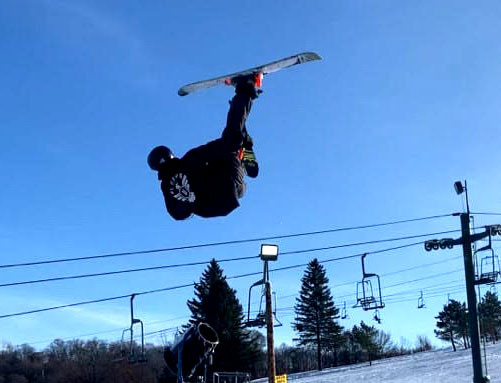 Students who participate in freestyle skiing and snowboarding often share clips and images of themselves doing tricks to their social media. This creates a larger sense of community in which students can go to find support and praise. Jae Walters spends a lot of time freestyle skiing at Afton, where his tricks have greatly improved through the years.

Freestyle skiing and snowboarding are often not thought of as common winter sports that many highschool students participate in. However, some students at South have found their home in the communities of these two sports. Freestyle is defined as a form of a sport in which there are fewer restrictions on the moves and techniques competitors can perform. Freestyle skiing is a trick based sport in which skiers perform tricks off of jumps, ramps, boxes, and other obstacles.

The communities that some students have found in these sports have given them something to put their time and energy into during the winter. It has created a place where they can find support during tough times and cold seasons.

For senior Jae Walters, skiing has been a foundational part of his life, “I started racing at Mount Lacrosse in Lacrosse, Wisconsin when I was around 11. My dad took me skiing and I really liked it. It was just downhill at first.” As Walters began to ski more, he quickly found a home within the freestyle community, “ My friends were doing freestyle so I started doing it at about 13, by 14 I had fully switched over to park skiing.”

According to Walters, freestyle is a more skillful and challenging form of skiing than cross country or downhill. “Cross country is more of an aerobic, fitness based sport and freestyle is more of a skill based sport. More of an extreme sport.”Freestyle is defined as a form of a sport in which there are fewer restrictions on the moves and techniques competitors can perform. Freestyle skiing is a trick based sport in which skiers perform tricks off of jumps, ramps, boxes, and other obstacles.

Skiing is such an important part of Walters’ life that he and his family moved from Lacrosse, Wisconsin to Minneapolis so that he could ski at Afton and attend South. “My home park, Mt. Lacrosse, has a terrible terrain park and the administration is terrible. It is terribly run. The season is only two and a half months, and Afton has been open for months now. I had to drive up to Minneapolis whenever I wanted to ski.” Before moving to Minneapolis, Walters struggled to find a balance between skiing and school, “I was taking every friday during the season off so I could drive up to ski for the weekend. But my grades dropped and it was way harder to keep up [with school].”

The skiing and snowboarding communities are closely interrelated due to both sports operating in the same terrain. For junior Ben Plante, a snowboarder, the community at parks like Afton are full of camaraderie and love, “I enjoy the people I’ve met snowboarding most, just riding and trying tricks with them. We post all our clips on Instagram and everybody shows love, there’s no judgement.” Walters has had a similar experience with the freestyle skiing community. “Pretty much everyone who skis or snowboards is friends,” said Walters.

Plante got into snowboarding in a slightly different way than Walters, which later influenced him to start skateboarding. “ My neighbor got me started skiing at this hill across the street from my house when I was about 8 or 9, so I snowboarded before I skated. I’ve met so many people snowboarding, thats where most of my close friends come from,” said Plante. Not only has Plante been doing it for a long time, but it is his first priority. “I’d probably doing something way different if I weren’t snowboarding, probably focusing on school. It’s what I do all the time, I probably focus on snowboarding more than school. It’s always on my mind during school, kinda a distraction sometimes,” said Plante.

These sports are also really beneficial to the mindsets students bring to school everyday. During the winter it can be hard to find motivation or happiness, but skiing and snowboarding can give good energy and positivity to students. Plante said, “ It gives me something to do, something to look forward to and makes me really happy during the winter.” For Ethan Peterson, a senior and a cross country skier, skiing is a great way to put bad thoughts out of mind and unwind. “Sports are a really good way to focus your negative emotions during winter. I’m very competitive, racing is a good way to express that. I can screw around with my friends, just having a good time,” said Peterson.

The worlds of freestyle skiing and snowboarding are very intersectional with other forms of skiing and snowboarding, like cross country or downhill. Many freestylers, like Walters, had their first experiences with the sport while doing cross country or downhill. While Peterson does primarily cross country, he can relate to the communities that Plante and Walters have found in the world of freestyle. Peterson said, “I did downhill racing as well as cross country. I just loved messing around on the mountain. I could do a 360 spin and boxes. I like the backcountry runs more than straight jumps, I’d always hurt myself on those. I’ve found people who love adventuring, people who love being outdoors. Skiing is one of those things where there’s so many places you can go with it. You don’t really find any boundaries when you’re doing these kinds of sports, you’re being open to anything.”