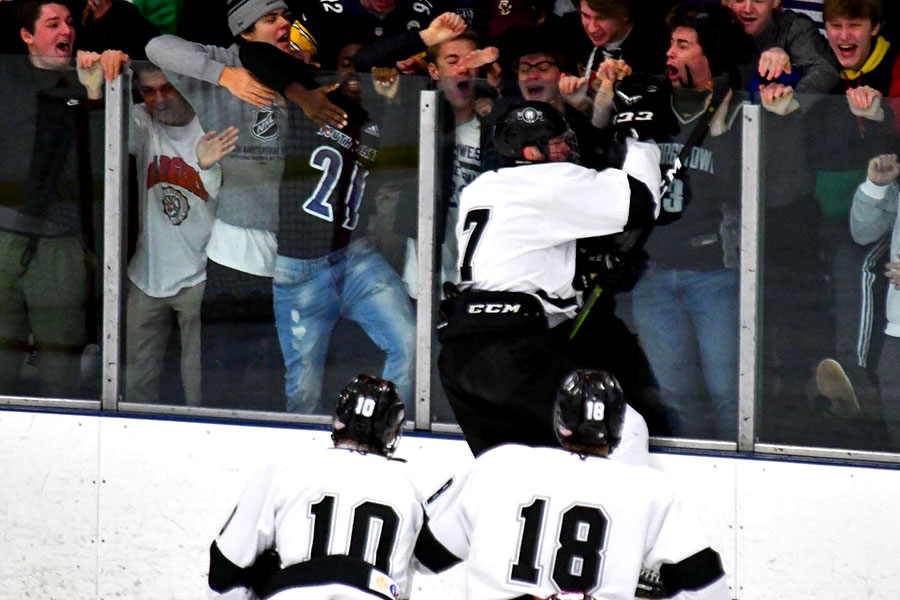 Members of the Minneapolis High School Hockey team celebrate with a exhilarated crowd. The teams consist of players from Minneapolis Public Schools, including South, Southwest, and Washburn. In recent years the teams have seen an increase in participation and interest. Ryan Wagner, a senior on the team, who has been playing hockey since he was six years old, said, “I feel like the number of boys and girls [from South] has increased over the years and it just keeps growing.”

Over the past few years the participation on the Minneapolis Public High School Hockey teams have been growing rapidly. This year there are nine South players on the teams.

Ryan Wagner is a senior on the team who has been playing hockey since he was six years old, and has played with South for three years now. He has noticed an increase in the number of players on the teams. In his sophomore year there were only two South kids. “As of last year, there were three more kids from South that joined and were on JV. I feel like the number of boys and girls [from South] has increased over the years and it just keeps growing.”

Rocco Karlsen, a junior this year, who says he has been playing hockey for as long as he can remember, agrees with Anderson. “It’s just we had the kids coming up from the youth program. A lot of them are in Minneapolis schools where the year before a lot of them ended up going to private schools,” said Karlsen.

Karlsen also recalls more people trying out for the team this year. There are currently 6 South boys, and 3 South girls on the teams. The majority of players on the team are from Southwest, and many from Washburn.

One reason Anderson likes the sport is because of the comradery. “I think it’s a really interesting sport because it’s so physical but both teams can come to an agreement at the end and shake hands.” She added that some middle school students are playing for the high school team and that coincidentally, they have been winning more this season.

Wagner believes that being on a team means that you are a part of a family. “You’re being that perfect teammate for the other guy or your whole team sitting on that bench, being there for them and supporting them even if they mess up on a play or let in a goal. You are there for your teammates, supporting them, uplifting them. That’s one of the greatest things.”

It seems to be a general feeling that the sense of community is the best part of being on Minneapolis Hockey. “[The best part is] being able to support and lift each other up and empower each other. We’re all just trying to be the best versions of ourselves out on the ice and being a part of a team means that you’re supporting every single person and allowing them to do that!”
A common conclusion may be that since hockey is not talked about a lot at South, when more people go to the games, the interest in the team increases. “It’s just not very well heard at South and I’d love to see it be heard and people from South go to the games to see and come watch us play because there are South kids that play.”

In addition there is a new cheerleading team for the hockey team. They are experienced figure skaters and they hope to gain more South players.

Wagner noticed that this season the team had some slumps but now they are more steady. He said it can be difficult competing with private schools, but that the head coach has been helping them. However, being able to improve and get new gear takes funding. “[We need] new apparel. We need to get fitted for gear so we look like an actual team instead of guys just showing up to the rink in jeans and their normal wear clothes. We want to look united as a team, wearing all the same stuff, be organized, and have that success. Being one true team like how these other private schools look.”