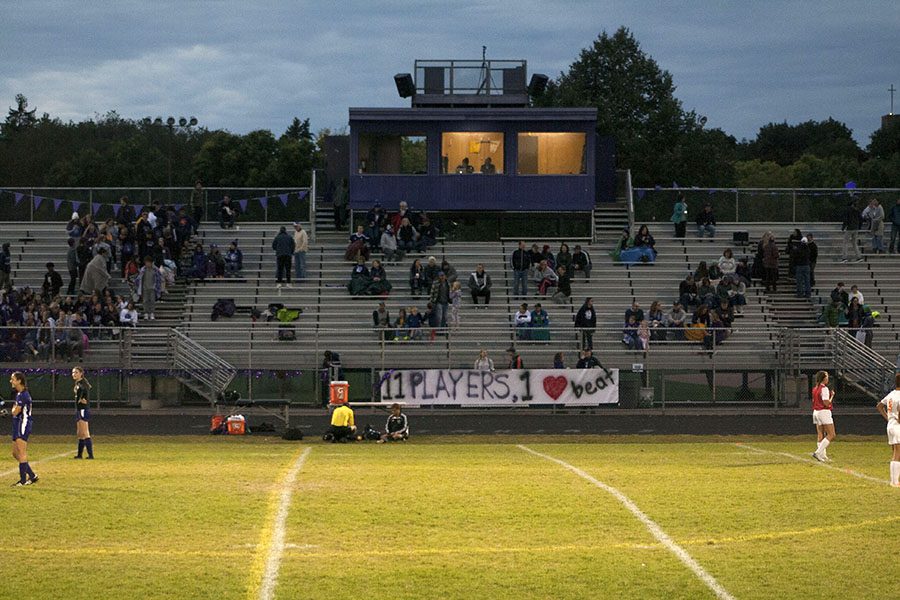 Many students would agree that attendance is disproportionately lower at women’s games than men’s games. “I think there are more people at the guys games than the girls games,” Aidan Campbell, senior on the Varsity Boys team.

Gender inequalities in sports are something many people notice but don’t pay much attention to, however, during this soccer season, this disparity was really brought to center field. Why is it that there seems to be more people in the stands watching boys soccer games than girl’s soccer games?

Most students would agree agree that there is a disparity. However, the reasons for this disparity are still being disputed.

Lots of students disagree with statements like these, one person being Ella Rank, a junior and a player on the Women’s Varsity soccer team. Rank believes that the higher attendance at men’s games generally isn’t a conscious decision from the attendees.  “It’s more just like a subconscious thing where people are like, oh I’m gonna show up to the boys game and probably leave before the girls game starts,” said Rank.

Rank also thinks that the referees react differently to the girls than with the boys. “Boys are kind of allowed to play more physically than girls. We get called for things a lot, our games are refed differently. Most refs will more tightly ref girls games.”

It’s not only people on the women’s team who believed refereeing played a part into interest. Aidan Campbell, a senior on the Men’s Varsity Soccer team said that “boys games tend to be called ‘looser.’”

“I just think that there is more of a hype around boys soccer at our school,” said junior Chloe Olson, goalie on the women’s varsity team. Olson went on to explain that this might stem from how in the past the men’s team had been more successful than the girls team. “People don’t show up to our games [because] of the false thought that the boys are better opponents than we are,” claimed Olson. It’s possible that the difference in attendance and support is entirely based on the culture around soccer at South.

Derric Johnson, the coach of the Men’s Varsity Soccer team, agreed with some of the claims made by players.  “I think it’s partially that the boys program is currently seen as more competitive, although I’m not sure that’s as true as it was ten years ago. In the past we’ve been more successful,” said Johnson.

Johnson later claimed that the culture around gender in sports has had many years to grow with Title IX laws allowing girls to be involved in schools sports in 1972. Sports funding at schools have been known to not enforce equal expenditure of funds for the two programs.

Another factor that could have an impact on game attendance is the timing of games. “More people come to the late games,” said senior Kate Rounds, player on the women’s varsity team.

Even though the mens and women’s games have been alternating times  this year, however, it seems that people are still showing up more to the men’s games. “They’ve had the girls games later, and historically whatever game is later will have more people because people want to be there later, but it didn’t actually happen,” said Campbell.

“Regardless of whether we play late or early, continuously there are more fans at the boys games than there are at the girls games,” added Ella. Other members of the team have come to the same conclusion. “Even when the boys have the earlier game, people will show up and be cheering but by the time they get to our game, people won’t be cheering as much,” said Olson.

Girls on the team seem to be upset about the lack of support and how it affects how they do in the sport. “Everyone was super bummed when people left at our Super Soccer Saturday game, so how do you expect women to be more successful in sports if you don’t give them the support and the resources they need to be more successful in sports?,” said Olson.

Rank said this disparity doesn’t reflect well on the progressive views of South High School. “It would feel nice if the school would be more supportive of women. Especially for a school that puts so much emphasis on equality.”

An example of the mistreatment of women in professional  sports is recognized by members of the women’s team. “The Fifa women’s team brought in more money and performed better throughout the years but they’re still being paid less,” said Rank.

Lack of support for women’s teams in the school system sets the mold for greater disparities in the professional sports industry and in other parts of society. Many students believe it’s time for students to step up and support our women’s teams.