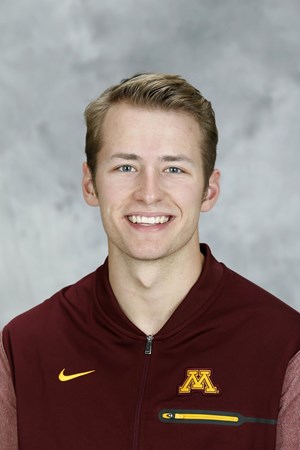 This year, South’s baseball team has gotten a new head coach, Luke Pettersen. He played baseball for the U of M, which he graduated from last May. Following graduation, Pettersen then had a short stint playing for the Saint Paul Saints. Coaching is a new and exciting experience for Pettersen. “I think that a lot of what I’m going to try to do is kind of bring my own unique twist on how we play the game, but I don’t know what their styles were in the past, so a lot of what I’m trying to do is make sure I create a really fun culture for the players and try to make them really enjoy playing baseball, because I do believe it is a really important sport as far as learning life lessons for off of the field,” he said. Photo courtesy of Gopher Sports

With spring finally approaching, the baseball season is also in sight. For members of South High’s baseball team, change will be in the air in more ways than one. This will be the first year with new head coach, Luke Pettersen.

Pettersen graduated from the University of Minnesota in May of 2018, where he played baseball for their team. “After graduation I was thinking about playing professional baseball,” Pettersen said. ”I had a short stint with the St. Paul Saints last summer, it didn’t end up working out so I decided to pursue a full time career.”

“Right now I’m a real estate agent,” said Pettersen. ”I decided to go after that and hang up the cleats, so I was just kind of working.” Pettersen explained that his fiance works at South, so one day he was “perusing the Minneapolis school website” when he found out about the available head coach position. “Out of nowhere this opportunity just kind of popped up,” he said.

Pettersen was excited by an opportunity to be involved in baseball again, especially in a new position that he has not been in before. “I kind of applied on a whim, just cause I thought it’d be really fun and it ended up working out.”

For the baseball players at South, a new coach is a refreshing prospect. “He’s a fresh new face,” said freshman Tate Baudin, who played for South as an eighth grader last year.

“It’s his first year coaching, so it should be cool to see where it goes,” said sophomore Andrew Lock. He is apart of the Winter Clinic held at south to prepare athletes for the coming season, and therefore has began getting to know Pettersen already.

“I think that a lot of what I’m going to try to do is kind of bring my own unique twist on how we play the game…and make sure I create a really fun culture for the players,” said Pettersen.

Lock played for the JV team last year, and is excited by having a new coach to keep things “fresh,” he said. In comparison to last year, Lock hopes that there will be more reliable transportation for the team, and hopes that Pettersen will have a more relaxed approach than the previous coach had.

“I want to make sure that kids are enjoying playing baseball…I’m not into yelling at people or that kind of stuff,” Pettersen emphasized.

“I’m just excited to be apart of the community and start getting to know the players, as well as helping them reach some of their goals, whether that be in the school academically, trying to get to college, or baseball goals…and really just developing relationships with the school and players.”

Sophomore Theo Wilson also had a similar hope for a more relaxed atmosphere this time around. “I’m looking forward to perhaps more flexibility…In the past, we’ve been told that family and education comes before sports, but we were often benched for long periods of time if we went on spring break or things like that.”

According to Pettersen, community will be vital in his coaching philosophy. This is good news for Baudin, as his favorite thing about the dynamic present last year was that “the team supported each other.” Part of building that support system was the connection kept between Varsity and Junior Varsity players, rather than keeping the two teams separated. Baudin said that in order for players to be successful, the coach must “be supportive of the team,” as well.

Pettersen discussed the influence his old U of M coach has had on how he plans to approach his new role as a coach. “His philosophy is a lot about communication between players and coaches, so his whole thing was that even the coach has to earn respect from the players, just like the players have to earn respect. I’m going to really try to mimic his philosophy,” he explained.

For Pettersen, it is important to recognize the benefits of baseball in many aspects, and he hopes that he can convey that here in his first year. “I think baseball is really helpful to me as the person I am today, I’m very thankful for how that ended up working out in my life because it has given me a lot of discipline and perseverance. With the amount of failures that you have in baseball, it kind of helps you in that way.”

His goal is to ingrain the belief that “baseball can really help you for the rest of your life and it’s not just about the time you spend on the field” to his players, and he hopes that one helpful lesson received is that “life is full of failure, and the only way to get better at something is just to try it head on. If you fail you fail, all you can do is keep trying. That goes for in school, and in life.”