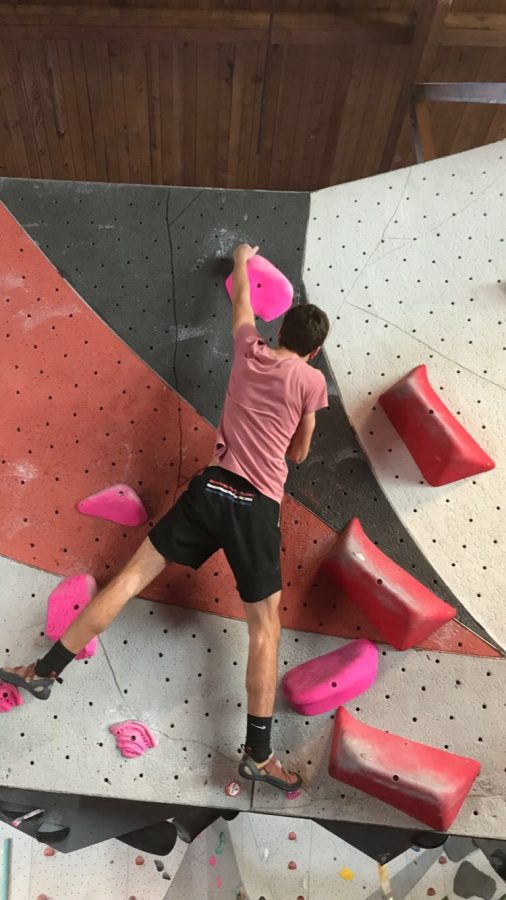 Henry Neufeld, an initial club member boulders at the Vertical Endeavors gym along with other club members. Members are very passionate about the sport, “I like rock climbing,” said Neufeld.

Henry Neufeld, an initial club member boulders at the Vertical Endeavors gym along with other club members. Members are very passionate about the sport, “I like rock climbing,” said Neufeld. Photo courtesy of Cass Carl

Students who are passionate about rock climbing have started a climbing club at South. “Climbing is an unrepresented sport at South and we’re all really into climbing, there’s a [new] climbing gym and we had been going there casually and decided ‘why not make it a club’,” said Ian Mackimm, a junior.

Simon Politsch, Cass Carl and Henry Neufeld had all been climbing together before and continued to invite new people. “They opened the new climbing gym right by our house and me, Cass, and Henry started going, and eventually a couple more people came and it just grew from there,” said sophomore Simon Politsch.

Junior Jack Hennen who joined the group of climbers a little later was also part of the process of making the club. “Basically Cass asked me if I wanted to go climbing I was like ‘sure yeah’ so we went to this other gym and it wasn’t as fun so we went to the bouldering gym and it was more fun so we got more people to come and it’s a club now,” said Hennen.

Climbing club will bring a larger range of athletic programs to South and has the potential to adda new community. “I think that climbing is not a very popular sport and I think it can bring more variety to the type of athletics at South,” said junior, Cass Carl. Fellow junior, Henry Neufeld also believes the club will bring a lot to South. “There was not a rock climbing club before, and we thought there should be one, it brings a way for people to rock climb,” said Neufeld.

Hennen believes a climbing club will fit in well with the energy at South, he said “climbing is a very challenging thing. It’s very mental and you have to be very strong and confident and willing to try new things, which is something a lot of people here at South High have on the table.”

Climbing club members have high hopes for the future of expanding the group. “We’ve had people who have never climbed before ask us about it and say they wanna come,” said Mackimm. “I hope that we can get more people to come and climb and have fun,” added Carl.

Politsch thinks funding would held to expand the club.“We were thinking if we could get funding from the school more people would be able to go,” said Politsch.

Hennen has some other hopes, he wants “some cool merch, like some cool t-shirts, and maybe some competitions one day. But right now the big focus is money and getting more people.”

Due to the lack of representation for climbing at South, founders admit that they’re struggled with finding people to join the club. “Our biggest challenge is getting people to come and climb, especially if you haven’t climbed before it might seem like ‘why would you want to do that?’ but it’s actually really fun,” said Carl.

The club leaders hope to get funding somehow in order to expand the group and make the sport more accessible. Carl said “it’s a pretty expensive sport to do so hopefully if we can get some money to make it cheaper we can get more kids to come climb. It is expensive and price can definitely be a big factor in not deciding to come, but hopefully we’ll get past that.”

“Aponte said he was going to give us a certain amount of money and we could have people climb for free with that and once we do get that we’ll let a lot of people know so that they can all come and climb,” Mackimm added.

Climbing club is a welcoming environment, one which they hope to expand over this next year and for it to continue in coming years. “We’ll have to find people who will to continue to run it because we don’t want it to die when we leave,” said Mackimm.

The sociable founders? all have many things in common, one being their initiative to full send. “We all are very outgoing young men who are trying to become better people and solve our problems by taking it out on the rocks,” said Hennen, who later added “we like to send it a lot so bring your A-game, make sure to be ready to send and stretch before because we don’t want to pull muscles.”

Climbing club collects their following on instagram via @southclimbing, but members  communicate via group chat. “It’s based on a group chat so if you really wanna join you should ask to get in the group chat cause that’s how we plan,” said Hennen. As club members would say, up and over.