Barnard Field gets back on track 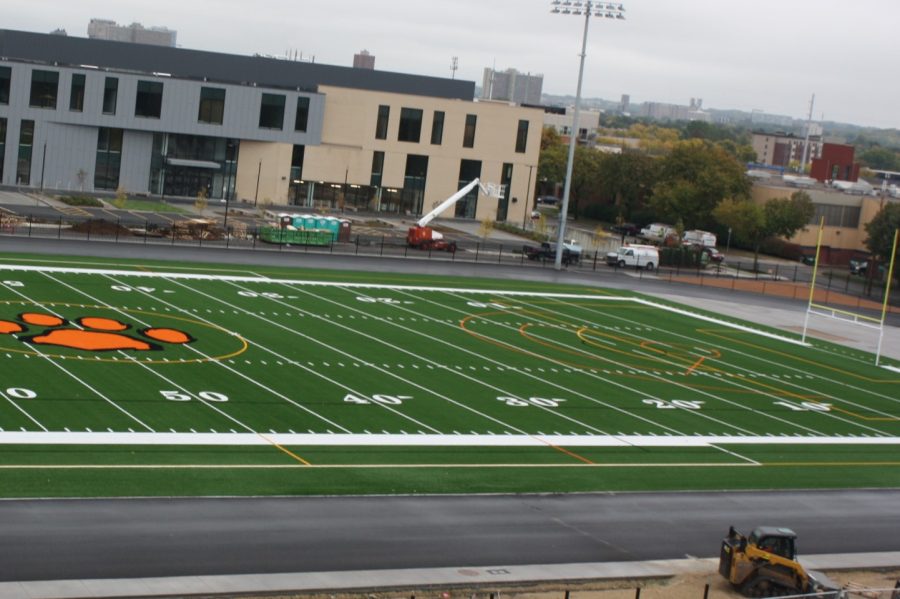 Barnard Field is undergoing major redesigns, it now features South High’s tiger paw logo in its center and several changes are being made to improve the track and the field itself will now use turf. These are some of the things we can look forward to for when the field is open again later in the school year.

While last year it was a host to student athletes and fans of high school sports, this year the most frequent visitors of Barnard Field have been construction workers and heavy machinery. It should be pretty obvious to everyone who’s given the field a passing glance since the start of this year that Barnard is undergoing some major redesigns or as Amy Cardarelle, South High’s Athletic Director, summarized “It was very old and outdated and needed to be brought up to speed.”

Cardarelle described the changes the field has been undergoing. “We’re getting our official turf, we’re gonna get lights, we’re getting a press box, and a brand new eight length track so those are the big things we’re getting and then we’ll have a sound system to go along with that pressbox to make it one of the best in the city.”

Some of the sports that have been affected by the field being unavailable this year have been Football and Soccer. Chloe Olson is a sophomore and a goalie for the Varsity women’s soccer team. She talked about how her team has been affected due to the lack of access to the field. “There’s home field advantage and you get pride and it’s easier to play at your home so to be out and not able to play at our home for that long is kinda tricky for our season and the results we get from our season.”

Andrew Njogu is a 10th grader who plays for the South Men’s JV Soccer team. The lack of availability has hit his team especially hard. “We’ve had poor practicing conditions, we’ve had to play at Matthew’s Park and it’s a really crappy field.” Njogu went further in depth about some of the specific ways practicing off campus has affected the team. “Transportation, communication, having it somewhere else is really hard to get everyone to know what’s going on.”

However, Olson is still happy that the field is getting redesigned. “I’m super excited, at spanish class every day I go out  and I look out the window to see the field I’m so excited for that to be done because there’s just something that really changes the way you play about being out on a field. I always have twice the motivation when I’m out playing on a field under the lights and its nice and there’s turf so yeah, I’m so excited for it.”

Olson isn’t the only one excited, this feeling is shared by the rest of the team too. “All of us are so excited to play, we’re bummed we couldn’t play on it this season but especially for the girls who are gonna have their senior year on that field we’re all super excited to have home games and we’re hoping that since the field is redone and its nicer maybe we’ll get better turnout at our games because of that so we’re all super psyched,” she said.

While the field being redesigned is a setback it is only a temporary setback according to Cardarelle. “We should be able to hold track events there and our spring sports.” Olson seems to believe the lack of access to the field was worth it considering the condition the field used to be in. “The old field was a safety hazard.It’s a miracle we didn’t have ACL tears playing on that so the fact that it’s now leveled and there’s not gonna be pockets because the turf is even, that’s the biggest deal because its not good when you have to worry about injuries on the field you’re playing on.”

The field being out of commission has had a notable impact on the fall sports this year, however it seems it will be worth it considering all the changes that are being made to get the field back on track. Njogu shared how he felt about the redesigns being made to Barnard Field. “Its bigger, its better, the South fans and the South athletes will love it way more.”