Division among community on how sections should be decided 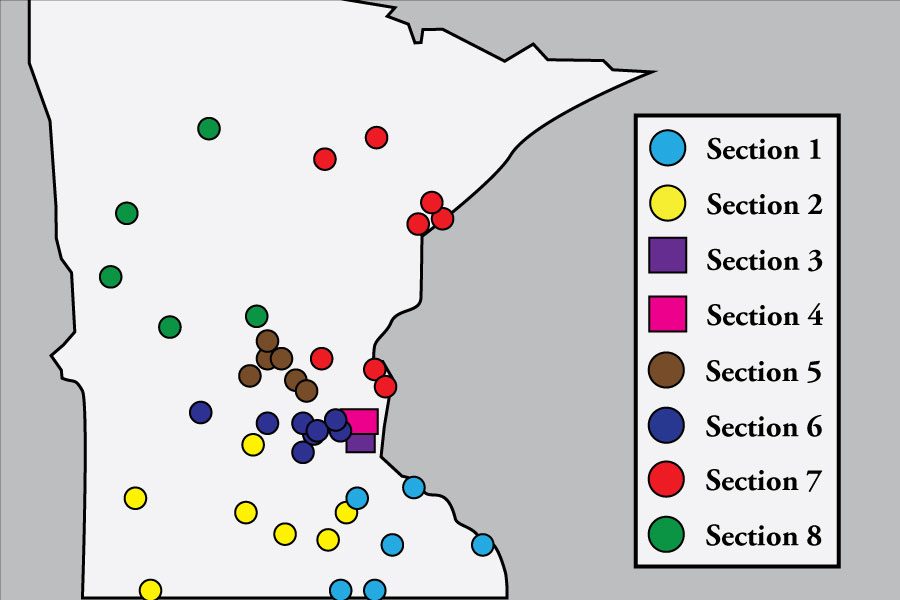 Minnesota’s current sectional division for baseball, Division AAA. South is a part of Section Three. As shown above the distance between some schools can be long, often causing extended trips for section games. Graphic: Eli Shimanski

Nearly 500 hundred schools are a part of the Minnesota State High School League. South itself is a part of region 6AA. Sports sections can be a confusing process that some do not understand it. Each sport is split into different divisions. Depending on the sport it can vary from two to six divisions. In each division teams are split into smaller sections of around six to seven teams. Every two years each sport goes through a relocation process where your team could be moved in or out of a section. These moves might occur due to teams dropping out or teams becoming coop.

Schools like South that have a large student body will be in the higher divisions and sections as explained via email by Head Football and Badminton Coach Rodney Lossow. For example South Women’s Basketball is placed into class AAAA Section Six, the same section as Hopkins High School who has the sixth best girls basketball player in the US for the class of 2020 according to ESPN.

One of the frequent problems that face the decisions for section lines is that many of the higher level teams can be put into the same section. In wrestling the two top teams of Division AAA are Shakopee and Apple Valley who are both in Section Two. With the two top teams in the same section not only does it not allow for other teams to be able to make it to state, but it also means at the state tournament the best teams aren’t always fighting it out for the state title.

Cross country and track also have the same problem with top schools being in the same section. Senior John Gross, a track and cross country runner thinks the best way to curb this is to “Make Minnetonka, Eden Prairie, and Edina at the corner of three different sections.” Franson states that “The final assignments are reviewed by a group of Athletic Directors to make sure that they are geographically contiguous.” (He explains that geographically contiguous means that you can draw circles around each circle and there won’t be any overlap) which means that separating the three schools would make it very difficult. Sophomore Basketball player Maija Feriancek thinks that the Minnesota State High School League should, “Rearrange things to make it better for the teams who aren’t as good as suburban teams, make it easier to for [these teams] to go to state.”

Although South is a large school, its football team is relatively small. Sophomore Brennan Miklos described the difficulty with this: “During Varsity games we’ll look over at the other team’s bench and there’s as many people on the bench as we have on our entire team.”

Lossow is not sure how the Minnesota State High School League can make any more exceptions for South then they have already for other schools. He knows it’s not a perfect system, but is “not sure there ever is a perfect system.”

But that’s not to say that the Minnesota State High School League hasn’t attempted anything. According to Franson, Section Four A basketball has been considering going back to a NCAA model to ensure that the best teams get to the state tournament. With the NCAA model, teams are seeded in divisions and play through different rounds (the sweet 16 and the final four to be specific) This allows the best teams to play the best teams.

Even though sections can be difficult for South, that does not stop South teams from defying the odds and doing well. Recently girls nordic skiing made it to the state tournament and the girls basketball team made it to the section finals against Hopkins getting close to returning to the state tournament. If South knows anything it’s that they just have to keep on grinding away.