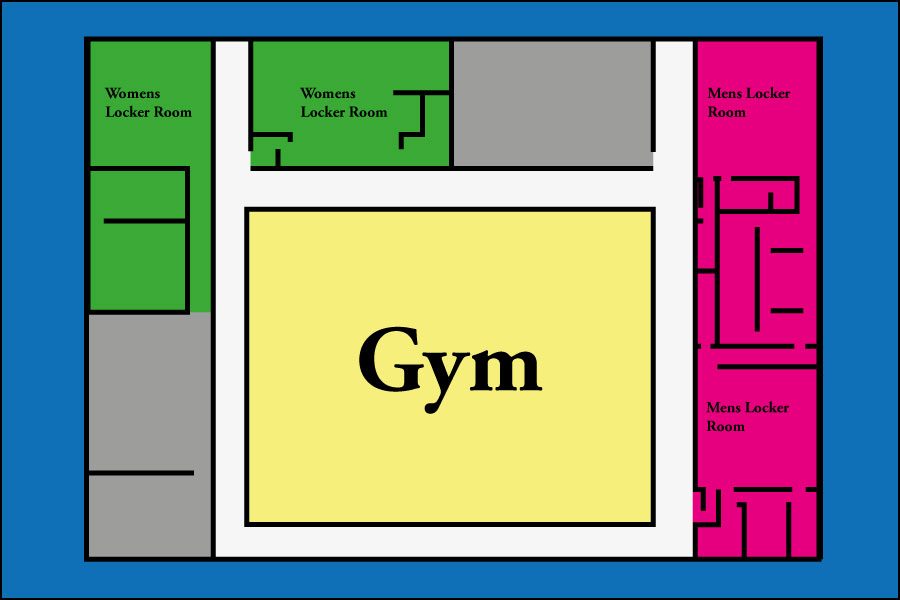 The girls locker room [pictured above] does not have the same amenities as the boys, for example, an ice machine. Cushing said, “I don’t get why it’s not just in the training room where athletes are all the time. I don’t know how plausible that is to move it or get another one, but beyond that I think there are other commodities that I think are missing within the athletics department itself.” Infographic: Eli Shimanski

Among many differences in sports at South, locker rooms are an unexpected issue for female athletes. For example the boys locker room has an ice machine but the girls does not. This may not seem like a big deal but it is very inconvenient for female athletes as senior Maddy Tennant explains, “Every time we need ice like during soccer we would have to go to the trainer and she’s a woman so then she would have to knock on the door [of the boys locker room] and get a guy to come out. It takes a lot of time, it’s just not effective.” Junior Solana Cushing also explained, “It’s not the biggest deal in the world but its just irritating… I twisted my ankle during Spanish class but I had a basketball game the next day so I had to go get gym teachers to go through the boys locker room, or go to a guy to go to the boys locker room to grab me some ice.”

Most athletes are unaware of the differences in locker rooms. “People who use the locker room a lot probably know about the ice machine but I didn’t, so there are probably plenty of other people who don’t know either,” said Junior Sean P.B.. Tennant added, “If you don’t play sports I don’t think you would know.”

However, the ice machine is not the only difference in locker rooms. “We have two locker rooms but they’re always locked. So then we have to go get one of the engineers but they’re male so they usually unlock the guys locker room but not the girls, so we have to find a gym teacher. It’s just inconvenient,” said Tennant.

Many student athletes come to school early to put their sports bags in their gym locker. However, when many female athletes try to put their things away, they find that the girls locker room is still locked, which is a huge inconvenience. Girls then have to either carry their bags around all day or track down an engineer who will let them into the locker room. “The engineers around South do a lot… it sucks that [the girls locker room] might be one of the things that is overlooked,” said Junior Griffin Tuthill.

Many argue that the reason for this is safety. If the girls locker room is left open during school hours like the boy’s, girls will be at more of a risk. But as Cushing explained, “Nobody else is going in there. [Privacy] is not as important as just getting your stuff and being able to put your stuff where you want it. I don’t think those two should be tied together.”