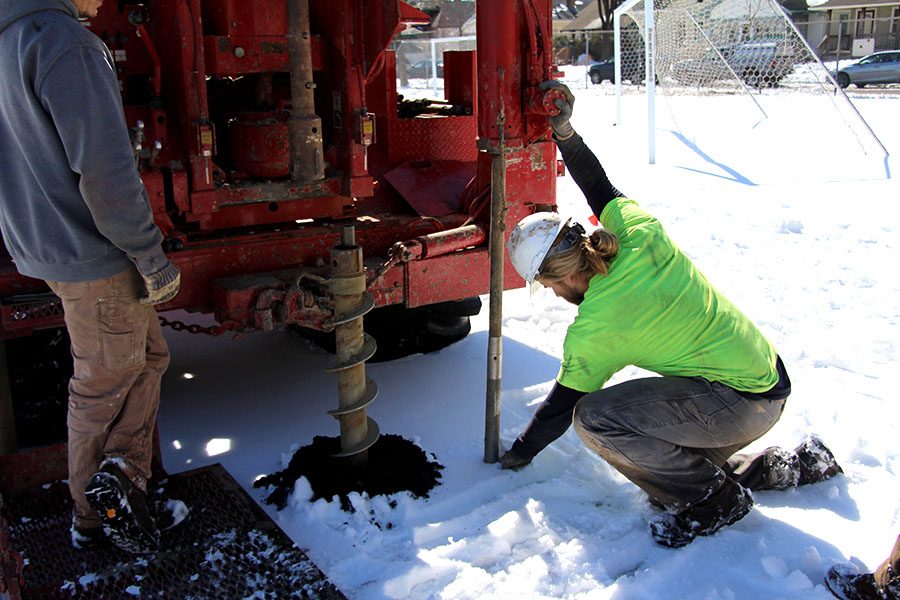 Wenck Associates taking standard penetration tests to determine soil condition on the field. These tests help determine the potential costs of the proposed field improvements. Students like Sophomore Claire Jensen are excited for the changes: “I’m looking forward to being able to play sections games on our field. Being able to play home games on our field and not having to worry about tripping or anything.” Photo: Henry Holcomb

It’s no secret that South’s field is in need of repair. It’s needed improvements for years, and now it may finally be getting some. You’ve heard the rumor, ‘We might get a new field next year,’ or something to that extent, but this year Barnard Field’s needs will finally be addressed.

In December 2017, the Minneapolis School Board approved the bond sale for Capital Projects, including an overhaul of South’s athletic field and facilities. The total cost of the project is almost $4.2 million. Already, a professional topographic survey has been completed, setting the ball in motion for this field’s renovation.

Construction documents are being developed using the existing footprint for the field. Possible additions include synthetic turf for the field, lights on all four sides, fencing, bleachers, and the movement of the equipment facility.

“It’s kinda been a relief, it’s like ‘finally’ because its been kinda terrible for so long and I do two sports that involve the field and the track so it’s hard to practice if there’s holes in the track.” Said sophomore Claire Jensen, who plays soccer, as well as track and field. “If you are kicking around parts of the track or if your soccer ball goes over to a spot where there’s a grate and you could twist your ankle in it, it’s dangerous.”

The current budget may not allow for a scoreboard, press box, or sound system. “That’s something that [South] might have to help get funding for,” said Principal Ray Aponte.

Although the funding has been secured, to what exactly the funding will go towards is still debated. Even though many people can cite numerous needs, not everything can be accomplished with the existing budget.

“With our budget we have, we know the general scope of the project… but before we put this thing out for bid for the street we will narrow down the budget such that we will have a really good handle what our anticipated construction costs are and at the same time we will know what we can or cannot do with this project,” said Planning and Design Manager, Senior Mike Prestine. He hopes to put out a construction bid in April with construction officially starting in June after school ends. The current goal is to finish the field improvements for the fall season of the 2018-2019 school year.

The existing field’s issues have been costly, and a nicer field would be beneficial financially. The lack of lighting on the field has been an issue that has long affected South financially. With better lighting, more home games could take place, and would limit transportation costs: “$80,000 of bus costs [for practicing] That’s the cost for most of our teams in the spring to go to other places to practice. [The improved lighting] would give us the ability to run two to three practices on [the practice field],” said Principal Ray Aponte.

The $4.2 million budget must cover all the existing needs of the field in a cost effective manner. This budget along with the item costs of each individual specific need will determine the finer details of the field’s end result. Item costs are projected to be finalized in the coming months. Each item must be balanced, the general budget of the project must be weighed when determining each chosen item.

These decisions are being made by the Project Steering Committee, a group of professionals who end up making the ultimate decisions for what exactly the field update will consist of. Although the Project Steering Committee makes the final decisions. The Project Review Committee can ask and suggest considerations. This committee consists of people involved with the field ranging from coaches to community members. This committee represents the voice of South and its community and advocates for the needs of the school and the surrounding area.

On March eighth, standard penetration testing on the field began. “We’re basically just trying to take a look at the soil conditions to determine if any material needs to be removed in the construction process of a new track, as well as trying to identify if there’s any potentially hazardous material here that would need to be taken or if it can all be reused for that purpose,” Ben Kramka, a Geological Engineer for Wenck Associates. In the tests, soil samples were taken as well as blow counts to determine the load bearing capacity of the field.

With high hopes for the future of South’s field, Jensen sees other potential benefits: “I think [the community] will be more brought together [by the field],” said Jensen. “More people will want to come to the games [and] see us play if we have a nice field, and have a nice stadium and we can show it off.”