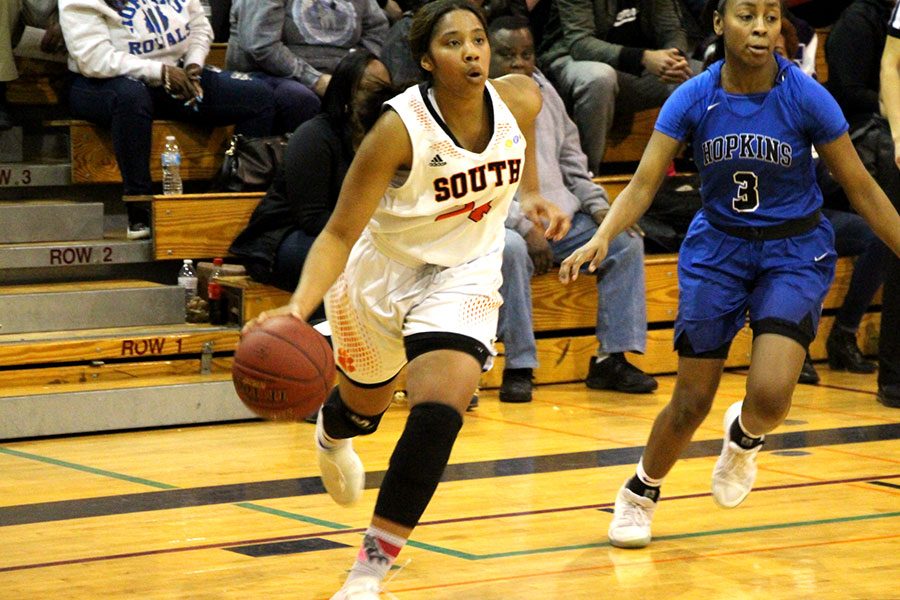 After the loss to Hopkins, senior guard Morgan Hill was thankful for support from the South teachers, students and band that came to game. “We've never come this far, so it was good that everybody came to support us and it didn’t end well but I’m glad everybody came.” Photo: Eli Shimanski

After playing hard, South Tigers lost to the Hopkins Royals during the women’s basketball section championship this Thursday, ending with a score of 95-62.

With a crowd packed with family, friends, teachers, and the bands from both schools, energy was high throughout the night. The beginning of the game was harsh, with Hopkins quickly taking the lead: “I didn’t feel very good about the first three minutes, we went down fifteen-nothing. They blitzed us with their press, we had too many turnovers,” said Head Coach Nathan McGuire.

However, soon the Tigers scored some points, but weren’t able to overtake the Royal’s score. The second-half was stronger according to guard and senior Morgan Hill. “I think our defense picked up as we went on in the game…We started taking care of the ball a little more second half.” The Tigers trailed the Royals by 20 to 30 points throughout the game.

Along with the fans in the stands, the players on the bench were very vocal supporters during the game. For freshman guard Camryn Benjamin, this was her favorite part of the game: “Anytime we do something, they’d like amp us up, and it was a really good feeling.”

McGuire was particularly impressed by the playing of Hill, and sophomore guard Maija Feriancek. “Morgan, as a senior leader, really stepped up, and took control, and helped us to stay in the game as much as we could,” said McGuire. “Maija, coming off the bench, was a spark. She was working hard out there, she made shots…She stepped up to it the moment she was up there.”

The game ended anti-climatically with Hopkins running out the clock for the last three minutes, by passing to each other without taking a shot. Boos and calls of “We want basketball!” were called from the South side of the court, while cheers came from the Hopkins side.

After the game, Hill was thankful for support from the South crowd. “We’ve never come this far, so it was good that everybody came to support us and it didn’t end well but I’m glad everybody came.”

The season overall like a success to McGuire. “We had a great season. We ran through the conference again 12-0, that’s two years in a row without a loss in the conference.”

For Hill, who has been a star of the team for the past four years, the future will take her far from Minnesota to the University of Tennessee-Chattanooga: “I’m going to be playing basketball there, D-1, so I’m very excited,” said Hill. Her teammates are what Hill will miss most about her South High team.

Looking towards the future, the team will be losing some key players such as Hill and senior forward Ariyon Kelly, explained McGuire. “There’s a lot of unknowns…we need to find some people who are going to step into those roles.”

Benjamin is hopeful: “We feel good…I think we are going to come back real strong next year.”

“We should be solid because we’ve been playing with each other for a long time so we should come back stronger than we were this year,” said freshman guard Jade Hill.