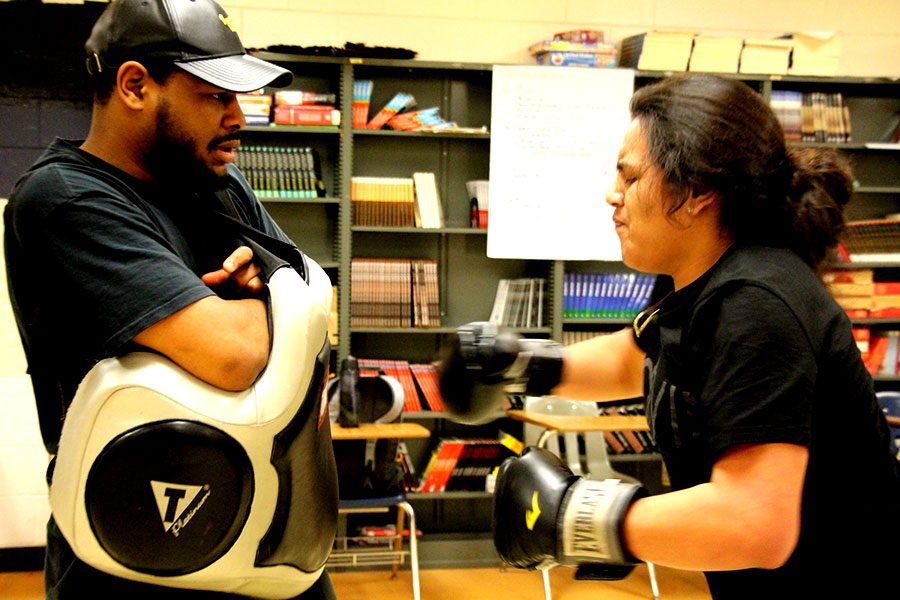 Andrew Fohrenkam practices his punches against coach Cerresso Fort. Fort finds that boxing “takes techniques and skills and you got to use your mind and brain to think. It’s good to be healthy.” Picture: Gabe Chang-Deutsch

Walk into room 134 and you might see a regular classroom. Books line the walls and there are desks shoved to the side. But, this room also doubles as a makeshift boxing gym on Mondays and Thursdays. The sounds of students finishing homework in the room next door are mixed with the thud of gloved hands hitting the pads.

Students joined for many different reasons. Senior Chase Khambounmy said “I joined because I thought it was fun and I’ve been watching boxing for a while and I wanted to try it out… I come not to learn violence but it’s more of a self defense type thing.” Freshman Eli Cole decided to join the team because boxing is a “combat sport and those give you the best workout.”

The South High Boxing Club is very new, having only existed a few weeks. Led by Cerresso Fort, a boxing coach from East Saint Paul, they hope to increase participation in youth activities. As the club is just beginning, the students have not begun to go head to head in boxing matches but are practicing conditioning and strategy.

Fort began to coach the team because he “loves students and wants to give back the knowledge you get from boxing.” He’s been boxing for 19 years and coaching for 10 years. He finds that boxing “takes techniques and skills and you got to use your mind and brain to think. It’s good to be healthy.”

One benefit of coaching at South he saw was the diversity. “You see students from all over the world here and no one is intimidated by the boxing, from the females to the males,” said Fort. Because this is a club and not gender segregated, that allows for girls to have the ability to join. On many boxing teams, only males are allowed.

The class at South is “more of a self defense class. We teach the basics of the technique and how to use it,”said word

Practice started out with a running warm up around the commons. “You need the warm up so you can get blood flow everywhere,” said Fort. Later, students put on gloves and practiced their boxing technique using jabs and a numerical system to remember what hit to use. “I came out to boxing today because it’s a combat sport and those are the hardest,” said freshman Eli Cole.

Later on in a practice, the athletes began to do 1 minute punching intervals of a pad that was around Fort’s body. Being a tiring time, some students began to trickle away. “It requires a lot if dedication,” said Fort. These intervals allowed the students to practice being quick on their feet and fast, quick punches. These intervals tired out the team and practice was soon over. “It was surprisingly tiring and you just got to hang in there,” said Khambounmy.

The goals of the program varied for different members of the club. Fort finds that boxing can “help your heart out and get you more focused on your academic goals.” The club also can help people work on their self defense skills. Cole, who wrestles for South, says “boxing is a good combat sport to train for wrestling.”