Where did all the female coaches go? 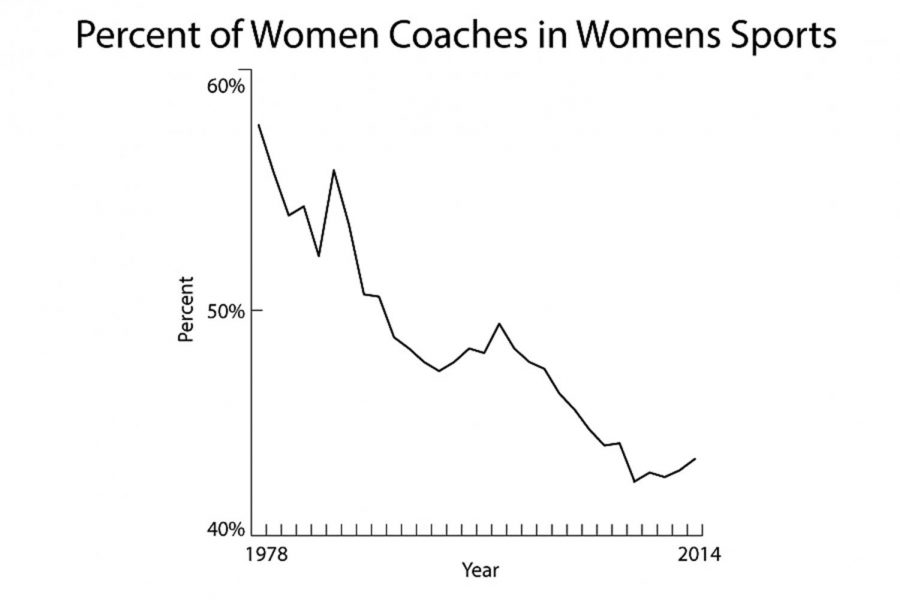 The above graph with data from a study by Brooklyn College called Women in Intercollegiate Sport A Longitudinal, National Study Thirty-Seven Year Update shows the percentage of female coaches coaching female sports since 1978. Shortly after the passing of Title IX, the percentage of coaches has been steadily falling.

When you play a sport, you normally want to feel comfortable and safe in that environment, and having a coach that is the same gender of you could help with this. “Having a female coach makes it easier to talk to your coach about some things, like personal stuff going on because it feels like they’ll understand more,” said junior and gymnast Bo Coultrip.

In the late 1970’s, women made up about 60% of all coaches in women’s sports. That number has dramatically decreased throughout the years. Now only about 40% of women’s sports have female coaches, according to The National Collegiate Athletic Association. “I don’t think girls are encouraged to play sports,” said junior Solana Cushing.

However basketball coach Val Roseth explained over an email interview, that she doesn’t “believe that the lack of female role models is the only or even the main reason for a lack of female coaches.”

Coultrip explained she thought it might related to muscle build: “[Men] get better at like muscle skills faster, they learn how to flip faster because…of the way they tend to build muscle.” Along with this, Coultrip explained that male gymnasts aren’t judged based on their dance skills in competition, whereas women are. “Female coaches are more detail oriented,” she said.

Roseth explained one possible reason for a low number of female sports coaches: “I found that juggling a 40-50 hour per week job along with coaching at the varsity level was too much….My daughter is still too young to bring along, especially for late nights at away games, too young to understand why I was gone so much, and my husband and I decided that it was best for our family for me to stop coaching,” said Roseth. “I would imagine the parenting aspect holds true for a number of female coaches who are also parents.”

Freshman and volleyball player Madelyn Pohl, on the other hand, believes the gender of the coach does make an impact on the team: “Sometimes you can relate more to the same gender than another gender,” she said. “In general, usually males don’t understand some things that females go through, and while females do.”

Both Coultrip and Cushing prefer having a female coach over a male coach, partly because female coaches are more understanding, as well as because of the difference in bodies. “My relationship with my [male] coach wasn’t as close as it is with my female coaches. It was always more they were the muscles, and you’d just go talk to the female coaches about real life problems,” said Coultrip.

“They are different, depending on like how they teach, or what [the way they] understand how it works because both people have different bodies,” said Pohl.

It is possible that girls need more female role models in order to give coaching jobs a chance. “It certainly couldn’t hurt,” said Roseth. “I think knowing how female coaches juggle all of the roles they play and assisting coaches in gaining those skills would be helpful; it’s not something that gets talked about, at least in my experience.”

Though the reason why there is a low number of female sport coaches is still debatable, it is clear that a coach’s gender can have an impact for many students. As South volleyball coach Wanda Carter said, the impact of the coach’s gender, “depends on the students.”