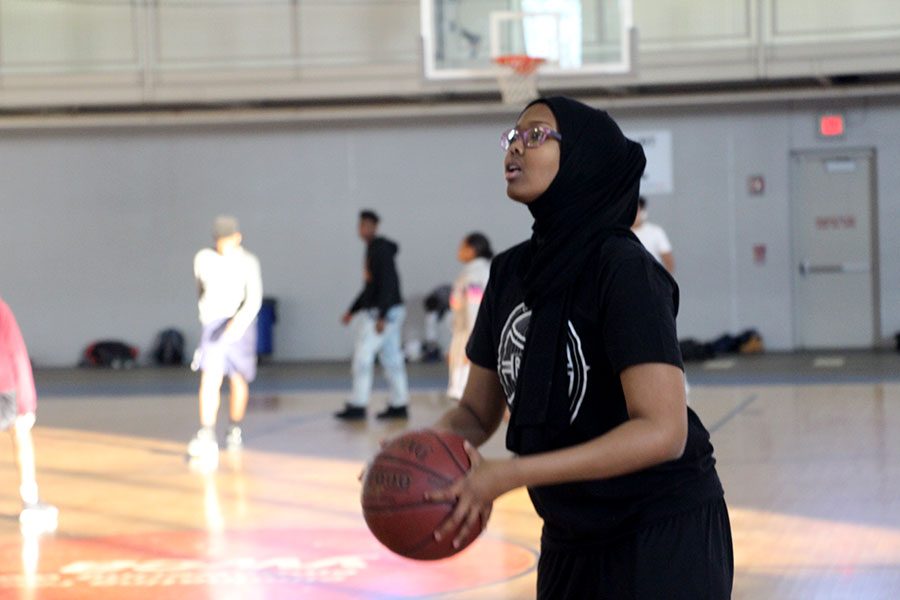 Freshman and member of South’s B-Squad Basketball team Rahma Farah lines up for a shot at practice. With South getting sport hijabs for the first time this year, it’s easier for her and some of her teammates to practice and play in games. Farah explained, “Without the sport hijabs it would be so difficult to play [in practices and games].” Photo: Cece Kaufmann

For the first time, South High School has gotten athletic hijabs. Jamila Bihi, a sophomore and B-squad player for South’s Women’s Basketball Term said this is important because, “For me, normal hijabs fly up and get in the way. I get sweaty in them.” Others have expressed how hard it is to move, how the hijabs get in the way, and how sweaty one can get in them. However, with the new athletic hijabs, it could be easier for Muslim students to participate in sports and feel more comfortable.

In 2017, Deering High School in Portland, Maine was the first high school to purchase athletic hijabs. This, along with Ibtihaj Muhammad becoming the first American to win a bronze medal while wearing an athletic hijab during the 2016 Rio Olympics, put them into the national spotlight.

Though sports hijabs haven’t been offered at South until this year, Bihi said that she remembers being introduced to the concept of sport hijabs around sixth or seventh grade, “I feel like it started when a lot of Muslims women wanted to play basketball or like any type of sport and their scarves kept getting in the way.”

Freshman Rahma Farah, another member of the B-Squad team, said that “this is the first year I’ve played basketball at South but the issue has always been there… my hijab has just always been in my face. When I shoot the ball, it always gets in my eyes.”

The process of getting the hijabs offered wasn’t very difficult. “Ms. Reynolds influenced it a bit, she asked if we wanted sport hijabs or anything because she always [said], ‘Your scarves keep coming off during the game’, and she just wants us to be comfortable playing. Also because if you’re more comfortable playing with your body in sports, you can play better in the game,” Bihi said.

As Ms. Reynolds said in an email, “I supervise many of our sporting events and I noticed that the hijabs the ladies were wearing seemed to be too loose and seemed to inhibit the ladies ability to play.”

Now that they’re being put to use, the scarves do help the players perform better. Hamdi Mohamed, a freshman and another player on B-squad, said, “Whenever I play a game, I score more when I’m wearing a sport hijab. When I wear the big scarves, I would just run and fall on the floor for no reason… When I was wearing the [sport hijabs], I’m more comfortable, I run faster.”

Some people still wear the standard hijab in a pick-up game setting or when playing with friends. “At the park, I don’t wear the sport hijabs but during games it’s way easier to play,” Farah said. “Without the sport hijabs it would be so difficult to play.”

Mohamed explained that the school got the hijabs from Asiya, a Muslim owned company. According to Asiya’s website their goal is to “encourage Muslim women of all ages—young girls, tweens, teens, mature women—to experience a new level of confidence, cultural integrity, comfort, and health.” Their goal for the sport hijabs is to “enable Muslim girls and women to be physically active and participate in sports while upholding their religious and cultural beliefs.”

B-Squad coach Jerome Graham expressed how he felt about his athletes wearing these hijabs: “It has a positive effect because being comfortable leads to more confidence and confidence is one of the biggest aspects of student-athletes performing optimally.”

Bihi said, “Our coach told us he didn’t mind what we wore. He asked us if we had headbands or something but we didn’t really and now with the sport hijabs it’s easier.”  And as Farah said, “He was supportive of them… at practice it would always be in our faces and messing with us.”

As for future plans for sport hijabs, Reynolds is not sure. “Students would more than likely request that their parents would purchase a sports hijab for them, similar to how parents purchase their student shoes to play basketball or run track. These sports hijabs are another expense that parents may not be able to cover, and could discourage students from participating in sports, so it is my hope that the district can find a distributor that can build a reusable one or come up with a sustainable plan to order them with the rest of the warmups and uniforms we order for sports”, she said.

Overall, students are happy that they are able to play and feel more comfortable while doing it. “I feel like we’ve gotten better as a team,” Farah said. “[The hijabs] always getting in our face was a big problem.” Bihi said, “I’m glad people in the sport department are recognizing Muslim girls playing sports.”