The wrestling team “family”: Stronger together 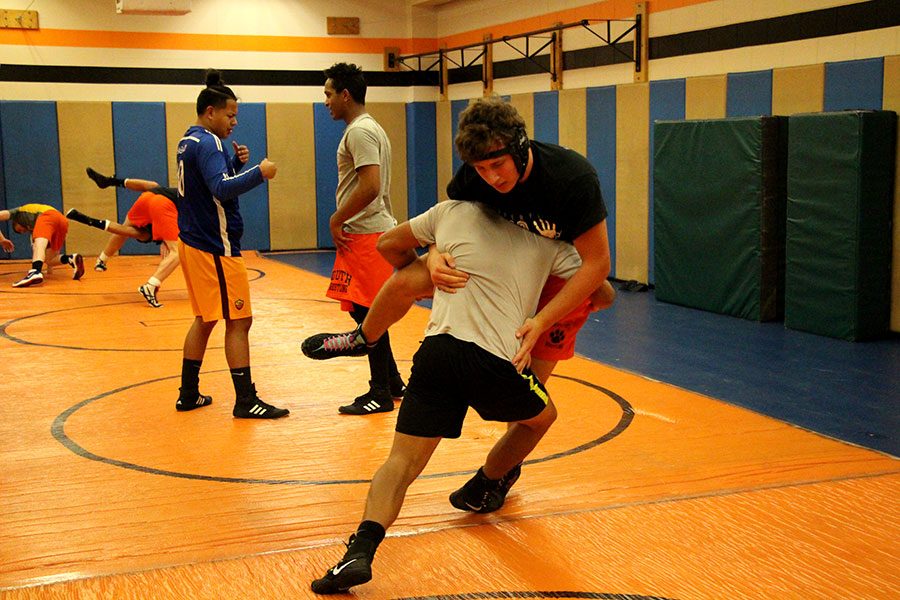 The wrestling team practices for second time this season. Head coach Drew Gau has high hopes for the team this year "We got a great group of kids. I’m excited about them." said Gau. Photo: Mia Swanson

The South High wrestling team has many accomplishments, yet the team gets little recognition in the South community. The wrestling team has been dominating championships for the past eleven years now. Making wrestling one of the most successful sports teams at South.

The team is lead by head coach is Drew Gau. “Minneapolis wrestling is not a sport that everybody really grew up with, but it was for me.” said Gau. Junior wrestler Tre Thompson says “[Gau] can relate to us as a whole” because Gau wrestled at South High when he was a teenager. Once he graduated college he got a telephone call to be an assistant coach and the next thing he knew he was the head coach. Now he’s been coaching for seventeen years.

Gau now expects the wrestling team to keep up their championship title. “It’s not that we have changed what we’ve done, but we’re more focused. We’ve learned what works.”

What works for the wrestling team is practicing five days a week for two to three hours. Drills last for about an hour and a half to two hours. Then an hour of practice is always dedicated to running. Two to three times a week is weight lifting.

Even though the team is held to high expectations and endures intense training the team still captures the interest of South students. “I think about about wrestling a lot of the time, so it’s basically everything that’s on my mind is probably wrestling” said Gideon-Abel Cole, a sophomore that grew up wrestling.  For students like Cole the wrestling team is a place to connect with others that share the passion for the sport.

Before practice the wrestlers bond with one another. They are loud, enthusiastic, and full of energy. Many enjoy challenging one another to pull off certain stunts like somersaults, cartwheels, and flips. They joke and mock each other in a friendly way. Each wrestler seeming to feel comfortable as a team.

Wrestling teaches more skills than just tackling someone to the floor. Thompson has been wrestling for three years now and has learned from alumni wrestlers that the skills like persistence and courage help in building future careers. “You see that they have done well in life because of some of the things they have learned from wrestling,” said Thompson. “I feel that while I may not see huge effects now, I think that when I get older I will see things that I’ve learned through wrestling… help me later in life.”

Thompson joined the wrestling team because he was persuaded by his football coach who also happened to be one of the assistant coaches. Gau advertises the wrestling team by asking students if they like roughhousing with their sibling or already play sports and want to stay fit over the offseason. The team is currently lacking wrestlers this year. They only have around twenty wrestlers, but Gau said in past years they have had up to fifty wrestlers.