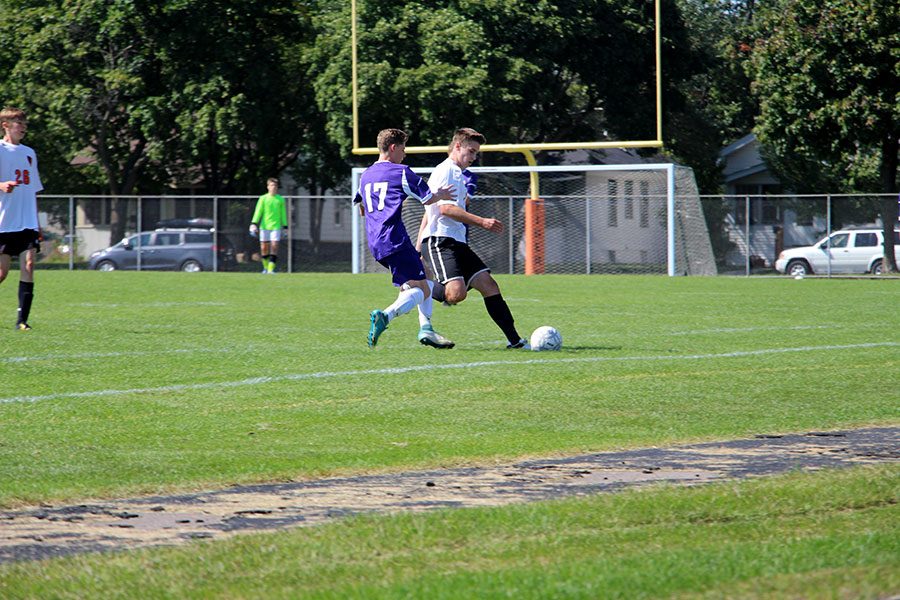 Pictured above: Sophomore and junior varsity player Jude Nair at Super Soccer Saturday. “We had ten games scheduled and [because of bussing] we only played six,” said freshmen Andrew Njogu. Soccer is among other South sports that are struggling with busing inconsistency. Photo: Henry Holcomb

Amy Cardelle, South’s athletic director, explained that this new budget cut means South is “back to just trying to save money on our own.”

As for coaches, there is a whole new level of concern added with the cut. Derric Johnson, the men’s head soccer coach, thinks the the cut will affect the uniforms in many ways: “What I assume is going to happen is we are going to get lower quality uniform at a lower price. What I really wish they would do is let me find the right ones from the right vendor,” he said. “I wish it didn’t have to be a school thing… because our lower level team’s jerseys are in such bad shape. We are planning to do a GoFundMe this summer.”

Andrew Njogu, a member of the freshman soccer team, said: “I hope we can find another company to make uniforms for us, like Nike or Under Armor.”

Although the future of uniforms is unknown, the pieces are starting to come together. “Spring sports were next on the docket… but those guys got uniforms through other grants, softball last spring on a Dunkers grants. Baseball is getting them this year,” Cardelle said.

She continued: “We are trying to keep on top of things, we are okay for now, for a year or two. We try to replace [uniforms] every three to five years.” Cardelle also explained that when the school needs uniforms next, the department will have to fundraise and apply for grants, by trying to find “money where we can find it.”

Another issue in Minneapolis Public Schools athletics is transportation to sport practices as well as the reliability of busses to games. For the 2017-18 school year, the district’s busing policy was changed. The website now states, “Transportation is not provided to practices for any student in any grade, but is provided to games with pickup and drop off at the partner or community high school.”

Cardelle notes, “The district never provided busing [to practice]. That came out the school budget and essentially because we are so landlocked for field space, we have to bus to a lot of sites off campus but now we don’t have money to pay for the buses, which usually run around $185 a trip.”

The bussing issues affects the men’s soccer teams dramatically: “We missed two games because of it, one for freshman team, one for JV. We ended up having three teams an hour and a half late to Eagan at one point,” Johnson explained. “The worst thing is, this isn’t even objectively worse than last year, it’s the same. Every year.”  Njogu expressed the same concern as Johnson: “We had ten games scheduled and [because of busing] we only played six.”

Part of the issue, Johnson believes, is the bus request system. “When we request buses the system is super antiquated… It’s ridiculous. You have to fill it out by hand, you can’t do it electronically… That [the school] then makes a copy of, then sends it over to the bus company, hoping that they’ll read everything right… there’s handwriting issues, there are ones that are just too complicated. There are miscommunications all the time.”

Johnson hopes that soon, there will be a switch from the paper copy request form to the electronic version. “[It] would allow us to request buses on the fly… I have to request buses a month at a time, so I’m requesting sixteen buses and there is a ten percent error normally… you never really know.”

As for next year, there is concern about where the men’s teams will practice when the new field is under construction. “Next year, we aren’t gonna have any home games… though there is some level of ease because I never have to wonder which ones are home and away,” Johnson said. “However, JV and Varsity won’t be able to practice here and since they took Bossen [practice fields] away from us, where do we go?”