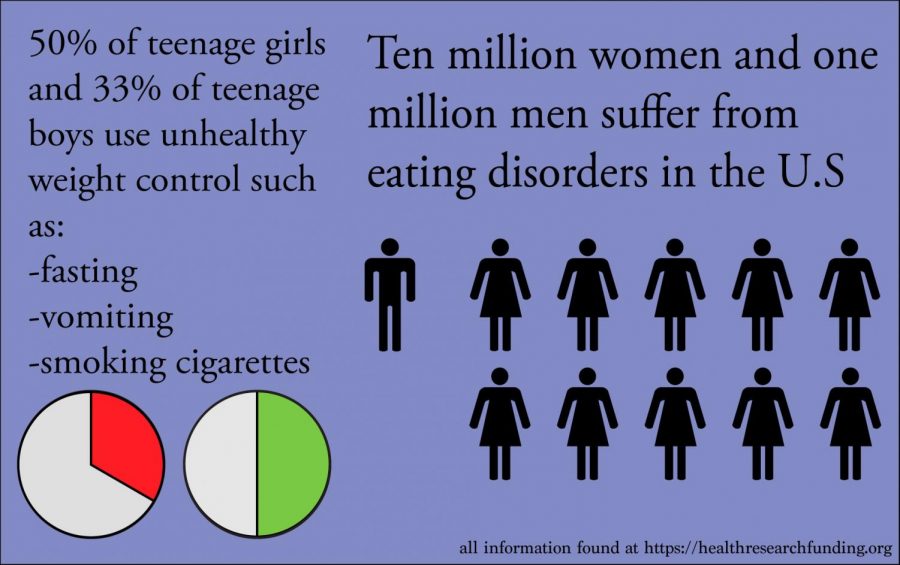 This infographic with information from Health Research Funding organization shows statistics of eating disorders in teens. “They [athletes] don’t mean for [eating disorders] to be, that’s not their goal but they just happen to come across it because they’re thinking, ‘I’m trying to make weight...’ and then all of a sudden they develop this pattern of eating, or not eating, or dysmorphic eating where they actually may have an eating disorder,” said Jennifer Lucke.

“I think it’s something that you don’t hear about enough. You just don’t hear about it enough because it’s not in the news like drug overdoses, or other issues that are more common among teenagers,” said Jennifer Lucke, health and physical education teacher at South. Lucke is talking about the issue of eating disorders within student athletes.

Eating disorders typically develop in young adults high school to college age, and especially among students involved in sports focused heavily on weight or body size (such as but not limited to, wrestling, gymnastics, dance, etc.). According to the National Eating Disorder Association, “Involvement in organized sports can offer many benefits, such as improved self-esteem and body image, however, can also be a factor contributing to severe psychological and physical stress. When the pressures of athletic competition are added to an existing cultural emphasis on thinness, the risks increase for athletes to develop disordered eating.” Often, many sports promote a certain view on body shape and size and can therefore end up unintentionally normalizing dangerous eating and exercise habits that can develop into eating disorders.

Habits like restrictive eating and extreme calorie counting are often symptoms of Anorexia Nervosa, one of the three most common types of eating disorders in the U.S. Other habits like self-induced vomiting or excessive working out with the primary goal of losing weight are often symptoms of Bulimia Nervosa, the second of the three most common eating disorders. The third is Binge-Eating Disorder and symptoms often include eating when not hungry, eating a lot in a short amount of time or eating past feeling full.

Often student athletes don’t realize when these symptoms are becoming serious and developing into eating disorders since it may seem like the normal thing to do to succeed in their sport. Lucke gave a wrestling practice as an example when explaining this saying, “They [athletes] don’t mean for [eating disorders] to be, that’s not their goal but they just happen to come across it because they’re thinking, ‘I’m trying to make weight…’ and then all of a sudden they develop this pattern of eating, or not eating, or dysmorphic eating where they actually may have an eating disorder.”

Since the early 2000’s, coaches are required to be trained in dealing with eating disorders in student athletes in order to become certified school sports coaches, Lucke explained. “They have gotten better, especially at the high school level they have gotten better about making sure that their athletes are healthy.” Although now there is a much stronger knowledge of eating disorders in high school athletics, it is still a dangerous and often unrecognized issue.

If you think you or a friend or family member is in need of help with an eating disorder, contact a trusted adult or resource like the school clinic, a personal doctor, Melrose Clinic or The Emily Program for more information and support.