Did you know: South has one diving team member 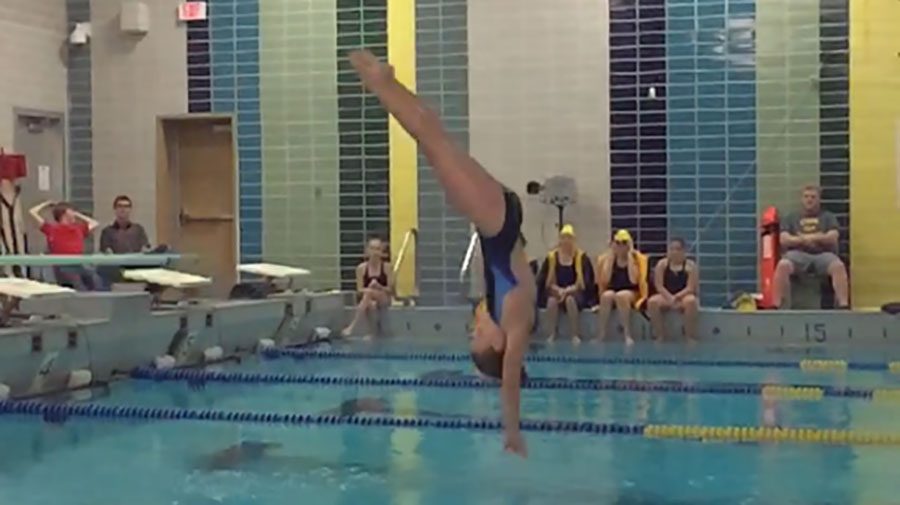 Pictured above: Katie Kelbrants, South’s only diver at the Columbia Heights competition diving. This meet happened last year on September 28th. TMT won both the swimming and diving competitions. After winning the meet Katie said, “I felt really good because diving is such a competitive and precise sport, it’s really difficult to win a meet.” Photo courtesy of Emma Bursinger

Katie Kelbrants is the only diver that South High has in “Tiger Millers Teddies,” or as the team calls it, TMT. She has at times thought about wanting another member in the diving team but really appreciates the support she gets from the members of the swimming team while she dives.

Diving happens in the middle of every swim meet while the swimmers sit and cheer Kelbrants on from the outside of the pool. The team members practice daily; they warm-up with some conditioning and stretching then head to the board. Kelbrants starts with her easier dives and then at the end of practice she does harder dives.

“I also love to represent my school on my own but sometimes it is a lot of pressure,” says Kelbrants, but her fellow students on the swim team cheering her on makes her feel valued.

When she was a freshman Kelbrants was planning on joining soccer, but because of her current athletic abilities she wanted to try out something new, and diving always looked interesting to her when she had watched the Olympics.

South High has often been focused on its’ more popular sports teams. This results in members of the South community not realizing that South has a diving team. Students are more informed of the swim team but even the swim team doesn’t get much attention. “It would be nice if we could get announcements during lunch or in the morning about our swim meets,” said Sophie Hansen, a junior at South and member of the swim team.

Hansen has been a part of the swim team for about three years but doesn’t have the flexibility to participate in the diving team. Flexibility plays a large part in diving because it is an essential element for having good form. Without flexibility it is hard to do certain dives.

Diving and swimming practices are pretty different, according to Katie, because swimming is so physically intense: “The varsity swim team practice is very tough.”

Another difference betweeen diving and swimming is that swimming involves constant movement whereas diving is almost entirely focused on technique.

Cathy Taylor is the diving team coach for the South and Southwest diving teams. She has only been coaching for a few years but she does enjoy being a high school coach. “I really like the sport and wanted to keep involved,” said Taylor.

Just like doing any other sport, “Diving is a very mentally focused sport and you have to not only be physically strong but very dedicated,” said Kelbrants.

“I know me and my friends from the swim team still meet for dinner every month so it’s a great way to make lifelong friendships,” said Taylor.

She also hopes that Kelbrants will continue to learn and improve on her dives and place higher at sections than she did last year. This year, she has already beat her previous season’s best score.

Katie’s highest score for a six diving list used to be 136, and now her personal record is 158. She isn’t sure about what her eleven dive list score is though.

“The only downside is that South doesn’t give it’s swimmers and diver a lot of recognition, not a lot of people know that we have a team,” said Hansen. Kelbrants agrees saying: “There is a chance there are some students at the school have been interested in swimming or diving, they just didn’t know about the team.”

“Try something new even if you’re not sure about it, it could turn out being a great experience,” she continued.