South athletes get ready both physically and mentally 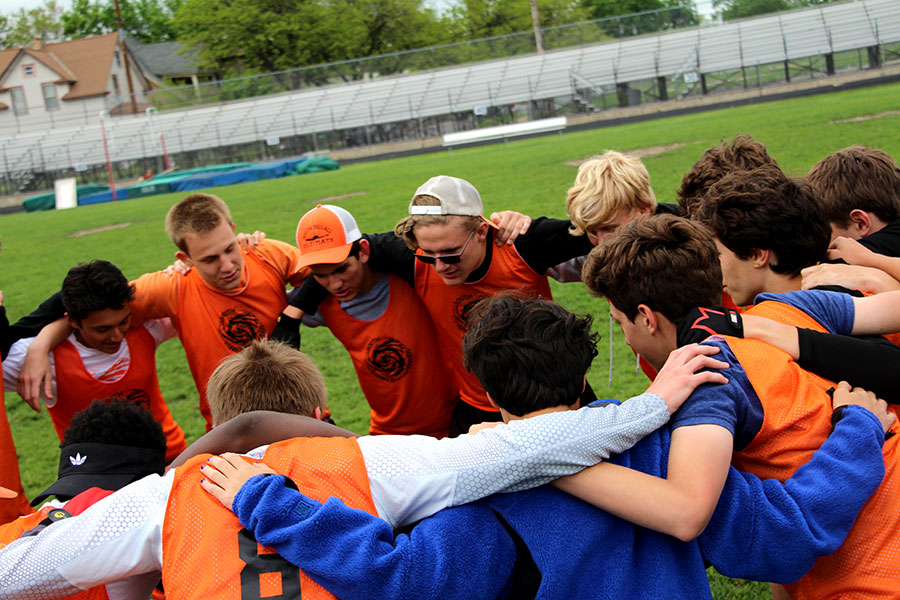 Pictured above the JV Frisbee team huddles before playing a game against Southwest. Huddling is one way coaches motivate their players, and offer criticism and tips. Freshman and Ultimate Frisbee player, Christian-Seth Nguyen, often prepares for his games by, "listen[ing] to music," to help him, "get in the zone." Photo: Oliver Hall

Athletes are a group of people known for their dedication to the sport they play. They put their bodies on the line, risking injury as a result of training or the sport itself, and dedicate years to developing proper technique and skill. Sports are also a mental thing. Athletes don’t just prepare their bodies for their sport, but their minds as well. Pregames are a part of almost every athlete’s routines, whether they’re large or small. A pregame is someone’s traditional habit they indulge in before games.Wearing the same pair of socks, or drinking Powerade/Gatorade to fuel their body with electrolytes. However, most commonly pregames consist of drinking lots of water, listening to music, and exercising or stretching to warm up muscles.

Christian-Seth Nguyen, a 9th grade hockey and Frisbee player, prefers to focus on his diet before his games. “I eat a good meal a couple of hours before, or the night before,” he continued, “and I’ll probably listen to some music to help me get in the zone.” “Every swimmer knows that eating Chipotle before meets is not smart. You absolutely do not eat Chipotle before meets. The way you feel is just terrible. You’re stomach hurts, and you just feel like death. Also, chocolate milk. [We] drink chocolate milk after every workout,” Said 11th grade swimmer Dutch Franco-Dines.

Music is commonly used by athletes as a way to help them focus,“I usually just listen to music. Not any genre in particular, but it just has to be upbeat,” said freshman Maizy Johnson who has been playing both basketball and soccer for the last six years.Upbeat music can motivate athletes, and increase their spirits before games creating a positive mood; increasing energy and awareness. The better you feel going into an activity– the better your performance will be.

“I just concentrate on what my goal is, and listen to music. I get pretty into the zone. I’ll talk to people sometimes, but I just try to concentrate on what I’m doing, and get rid of all other distraction,” said Junior soccer player Nathan Kange. “My pregame really depends on how in the zone I’m feeling. Jumping from foot to foot, [or] jumping as high as I can and bringing my feet all the way up.” Said Franco-Dines, “A lot of times what I’ll do is slap myself on my bare skin. Particularly on my arms, my pecs, and my back muscles. It numbs them, so I enter the water with a slight advantage.”

Bola Ogunlana is an 11th grade track runner, and has been doing it for the last two years. “I make sure I drink a lot of water, and eat good the day of the meet. For warm ups we do two laps around the tracks, and some skipping. [to get into shape] We do much harder workouts than we do in the season. I do what we call ‘latters.’ You do a 400, 300, 200, and then a 100 meter, and then you work your way back up the latter.”

Many routines range from being hard to being easy. However, there is one sport that is known for its rigorous training in preparation for it’s events. Wrestlers partake in non stop training and often use questionable methods to remain in shape, such as fasting and diet restricting.

Senior Amos Hewitt-Perry wrestled his Freshman year, and played football for his remaining three. Hewitt-Perry describes in detail some of the methods he and his teammates used in order to prepare themselves for matches, “[For] wrestling you’d have practice five days a week, [and] a tournament on the weekends. So you’d pretty much be working out for the five days. Then as it got closer to the date of the competition you’d probably have to run a little extra, or workout outside of practice to keep your weight down.” Wrestling is divided into weight classes. Because of this, lots of wrestlers try to cut as much fat as possible to keep their weight made up of mostly muscle; for the purpose of having advantage against their opponent. The technique of rapidly losing weight to achieve this is referred to as cutting.

“For wrestling you have weight classes, so a lot of times you’ll have people who will cut a lot of water weight to get down to a lower weight class. A lot of coaches, not at South, but historically would push wrestlers to get to the lowest weight class they can; and not necessarily in a healthy way. The lower the weight class you get to,” he said, “the bigger you’re going to be in that weight class; and have the advantage,” “A lot of times you’ll hear of people being hospitalized. Because basically, you’re dehydrating yourself. So you’ll see people who will pass out, people will just be super weak, very gaunt in the face, and look really unhealthy. It’s completely counter intuitive.”

While pregame traditions can seem outrageous or unnecessary they’re a frequent part of daily sports life. Weather it be listening to music, changing your eating habits, or just getting psyched for the activity you’re about to engage in pregames are a valuable way to prepare and engage yourself for your sport.