Managing the inequality for female athletes 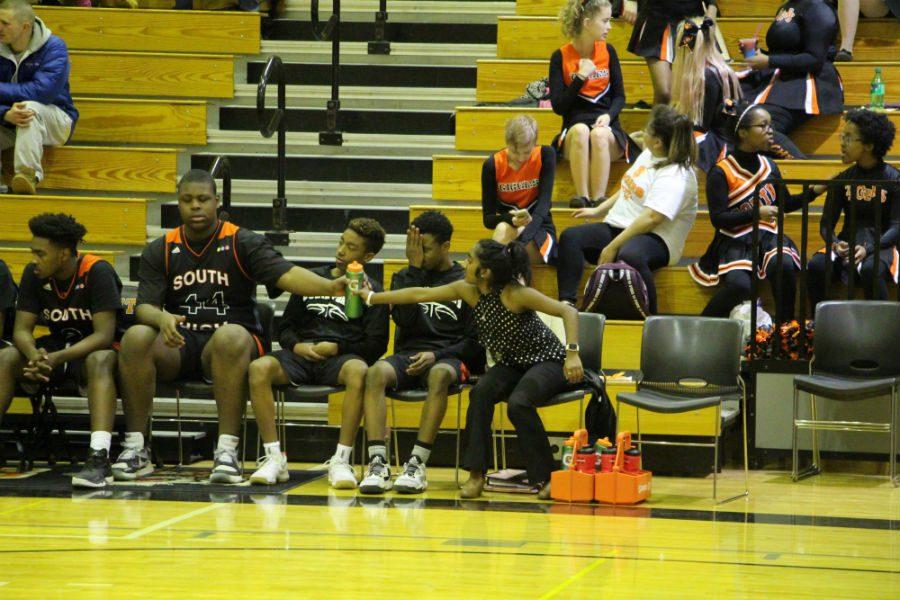 Men’s basketball manager Shovanna Raydeen helps hand out water to players during South’s game against FAIR school. Hydrating the players is just one of her many duties as team manager. Photo: Izzy Willette

The issue of sexism is one that many here at South do daily work to fight against. The fighting of an oppressive patriarchy is a duty that countless students pride themselves in contributing towards.

As of late, the idea of exposing sexism within sports has been a hot topic. Last year, there was a push to eliminate the turf difference in men’s and women’s  professional soccer conferences, even resulting in a boycott at one point. The artificial turf the U.S. Women’s Olympic team played on took a heavy toll on their game and their bodies; scrapes, rug burn, and rock hard impacts. While the men were playing on natural grass with high quality soil, a fluffy pillow compared to what the women were used to.

According to the Women’s Sport and Fitness Foundation, just 0.4% of all commercial investment money in sports goes to women, and they receive just 7% of media coverage.

It is commonly believed that the misogyny that is found in various sports branches from the idea that athletics is something manly, and used to prove masculinity. “You’re playing like a girl” or “man up” are commonly used phrases in boys sports, an attack on virility, and an insult to all women. Regardless of how strong and independent many  women today are, it is socially unacceptable to use femininity as a way to knock down someone’s confidence.

When you go to a sports game, you show up and direct most of your attention towards the players. Maybe you even lock eyes with the coach once or twice. But one person you might miss, are the managers.

Managers handle the equipment and “pretty much just whatever the coach tells us to do,” said Junior Shovanna Raydeen (who manages boys football and basketball). Filling up water bottles, counting footballs, score keeping, making sure the floor or field is in good shape, that sort of thing.

As little attention as they may get, managers play a very big part in making games come together behind the scenes. One thing you may notice about these managers, is that for the majority, they are all women. It is commonly debated whether this is coincidence, strategic, or outright sexist. As always, the varying of opinions results in a varying of answers.

To senior Tova Breen, this is just one piece in the puzzle of sports inequalities. “This all just kind of leads into how many more opportunities men have than women do in athletics,” she told me.“Men kinda just dominate sports and being a manager is one of the few ways girls can get involved.”

Recently it was brought to my attention that the Minneapolis boys hockey team didn’t have any managers for this very reason. The girls who had usually taken up this responsibility had grown tired of filling water bottles and baking cookies for events.

Senior Nailah Abdullah (manager for wrestling, cross country, and football) said “I feel like sports could be more inviting to girl players, and be more Co-Ed,” she told me “But at the same time, females shouldn’t be underestimated and I know a lot of people that enjoy competing against boys to show their worth, like myself, so the double standard is unfair.”

Quite frankly, this inequality just furthers an already problematic status quo. Not necessarily the issue of having all female managers, but the already few opportunities women have to achieve in athletics continue to dwindle.

The idea that we give women minimal places to participate in sports, and yet expect them to be the ones replenishing our water bottles is just another issue in the rhetoric of modern day society that needs fixing.

If we expect to make prominent change in society’s attitude towards women, sports is just another spot on the list of things yet to be revolutionized.