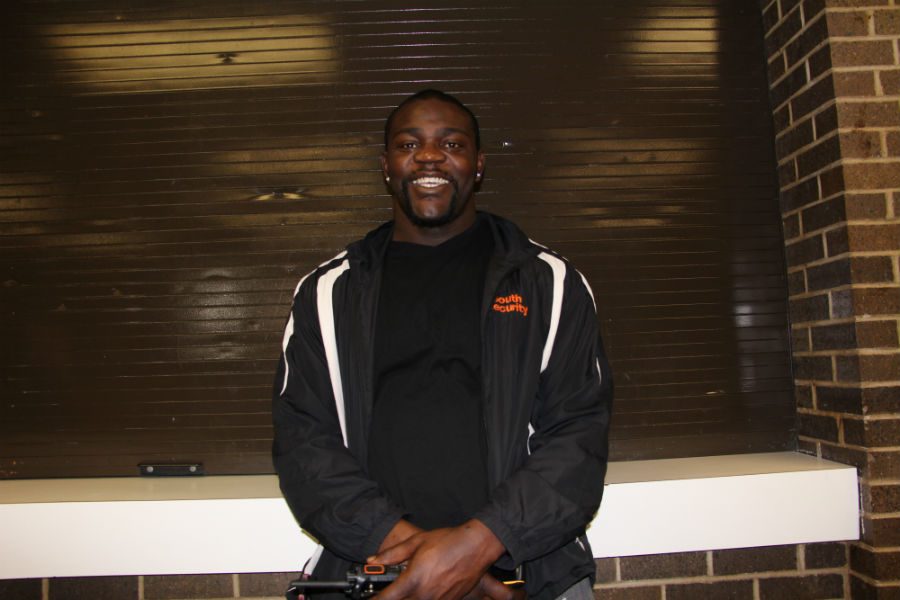 Look familiar? You may have noticed Mckinley, South High security guard, around the halls. He might have even asked you for a pass, or told you to get to class. Little did you know you were in the presence of a former NFL defensive lineman.

A security guard at a high school isn’t always someone many of us notice. Many of us pass them by in the halls without a second thought and never stop to think about them. However, ignoring people around you can make you miss out on some amazing facts. Cedric Mckinley, Assistant Caretaker and Security Guard at South is also a former pro football player. Mckinley has played for the Edmonton Eskimos and the Saskatchewan Roughriders in Canada as well as the New England Patriots and Minnesota vikings in the United States.

As you can imagine being a former pro football player helps a lot when it comes to being a security guard. The former defensive lineman confirms this saying ”I think it helps alot, It helps me keep everything organized and in line. Helps makes sure students are doing what they’re supposed to do. The same thing it applies to football, the same way it applies to life. The way you put your shoes on the  same way you gotta kick the football and the same way you gotta move. It helps me out in a lot of ways.”

To become a security guard there are several requirements. One of these is a criminal background check. As a packers fan I believe playing for any team besides the packers qualifies as a crime but thats none of my business. Surprisingly there are no fitness requirements to be a security guard, but they also suggest you be in shape. This isn’t a huge setback for Mckinley seeing as many common physical exams would be easy for a former pro football player. To be a security guard you also need at least a high school diploma (or a Graduate Equivalency Diploma).

Mckinley enjoys being a security guard having said “The big thing that I like most is building a relationship with the kids and the more I get to know the kids the more they get to do better in their grades.”

He also admitted “While I love doing this I love doing football more,” adding quote “I got released” from the Minnesota Vikings. Mckinley played Defensive Lineman for the Edmonton Eskimos and the Saskatchewan Roughriders in Canada as well as the New England Patriots and Minnesota vikings.

Cedric Mckinley first applied for another school before Minnesota public schools eventually decided he would go to south and he figured “if you want me to be here I’ll be here.” There is no doubt his contribution to South is both appreciated and wanted.

He does a lot at south informing “I’m a security guard, I’m an Assistant Caretaker. That means I help take care of autistic kids, I help kids with their families” also saying “I help others out a lot.” It’s clear Mckinley’s duties at South go beyond general security. Assistant Caretakers, like Mckinley, are generally in charge of looking after people and make sure they are okay throughout their day.

He’s made an impressive accomplishment saying “Last year I won a grey cup.” The grey cup is the name of the champion game of the Canadian Football League (CFL) as well as the trophy awarded to the winner of the game.

He also mentioned “I love being here, I love being a security guard. I love talking to the kids and getting to know their names and stuff, I think it’s really cool.”

You may not know Mckinley by face, but it isn’t too hard to figure out which 6’6 member of the staff he is.From the football field to the halls of South High Mckinley’s got your back. Before you find yourself without a pass in the middle of the halls just remember this former defensive lineman tackled many a quarterback in his day.