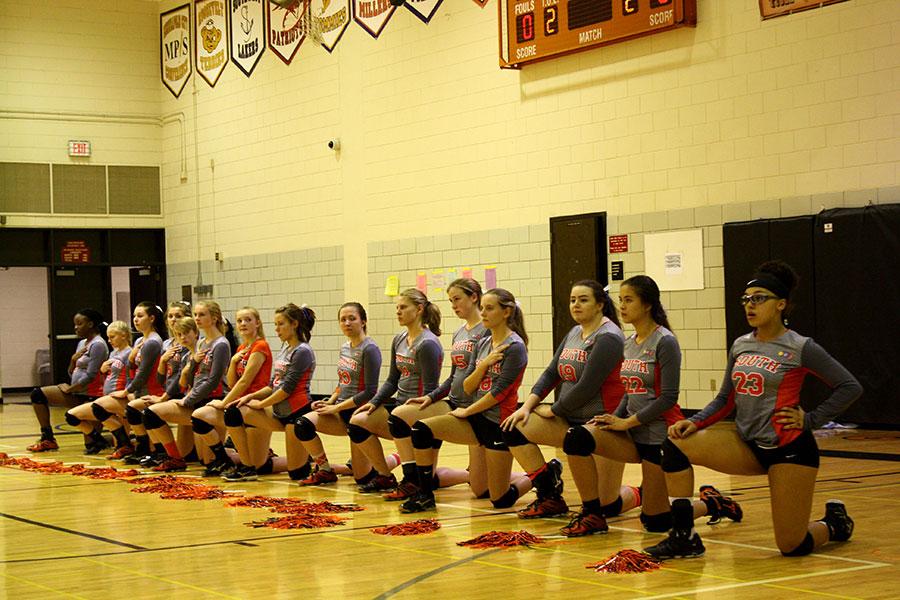 Kneeling for a cause: South High volleyball team

At their game against Washburn last month, the South volleyball team took a knee during the national anthem, taking part in what is becoming a national protest, to raise awareness towards the American government supporting and funding the police who have been killing people based on racial prejudices.

Sisi Mitchell, a sophomore here at South teamed up with Kaila Abraham, a junior, to pitch the idea of taking a knee during the national anthem. They found inspiration for the idea from multiple post circulating on facebook.

At first, it was only going to be Mitchell and Abraham taking a knee during the anthem but then they decided they should inform the team before it took place. The team as a whole decided they would participate.  “We all wanted to do it as a team because we all feel the same way ” Mitchell said.

Before the game, Abraham mentioned she was nervous because she has seen the backlash Colin Kaepernick, the football player who took a knee during the anthem to shed light on police brutality and the general treatment of black people in America. She was scared for herself, she was scared for her brothers. “I’ve lost three of my family members  to police brutality and it’s hard not getting any justice.” she said full of emotion,

On the day of the game, the girls were both ready. The volleyball coach didn’t know what was about their plan and the girls all knew that she couldn’t kneel because of her job. The national anthem began playing and they all went down in order of their numbers, Mitchell on one end and Abraham on the other. They both described it as powerful.

No one on the team or in the bleachers could’ve anticipated what was about to happen. The next morning, Shaun King, a well know activist and writer, had posted about South high volleyball  and twitter on facebook mentioning the movement. “Girls and women continue to be on the front lines of protests” King wrote. After over 8.3k shares and 34,000 likes on Facebook, people at school began to come up to Abraham and tell her “You’re famous! You’re famous!” They had all these major news outlets reporting about them taking a knee and within a few days other sports teams were doing the same.

They said it had changed the dynamic of the team only slightly “It brought us a little closer together but before and after we’re the same team.” Mitchell said

Being the only black girls on the team can be hard. Abraham says that people would always tell her “Oh volleyball is a white girl sport why do you play?” so she thought maybe this would change the way that people see her.

The purpose of the protest was obviously never to go viral. It was to raise awareness in our school and in people who saw their demonstration, about what is going on right now in America.

“We never expected it to go this far.”